SC indicates arbitration as an option for Ambanis

SC indicates arbitration as an option for Ambanis

New Delhi: Talk or we’ll make you talk. That was the message from the Supreme Court on Tuesday to the estranged Ambani brothers who are fighting a legal battle over the supply of gas from Mukesh Ambani’s Reliance Industries Ltd’s (RIL) D6 block in the Krishna-Godavari (KG) basin to Anil Ambani’s Reliance Natural Resources Ltd (RNRL). 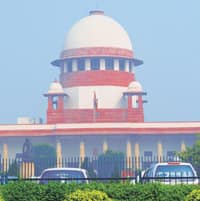 Neutral ground: The Supreme Court on Tuesday asked both RIL and RNRL to work on a ‘suitable arrangement’ for the supply of gas. Ramesh Pathania/Mint

“There was an agreement but you did not arrive at a suitable arrangement and you came to the court. What can the court do?" the bench asked counsel for the two brothers.

Interestingly, this is the second time the Supreme Court is striking such a note in the high-profile case.

On 21 October, referring to a similar course suggested by the Bombay high court when the case was before it, justice R.V. Raveendran had asked: “Why don’t the two companies go in for arbitration, mediation or a third-party intervention?"

RIL and RNRL had approached the Supreme Court against the 15 June verdict of the Bombay high court, in which it had asked RIL and RNRL to sign a “suitable arrangement" for the supply of gas. RIL is appealing the judgement while RNRL wants it expedited.

“Gas is a national reserve, subject to contract between parties," Balakrishnan observed during the hearing of arguments on the Indian government’s gas utilization policy, which forms the basis on which the government has prioritized allotment of gas.

While RNRL has sought the apex court’s intervention in a special leave petition for immediate supply of 28 million standard cu. m a day (mscmd) of gas from KG D6 at $2.34 per million British thermal unit for a period of 17 years, RIL in its affidavit has opposed this, saying the price is 44% lower than that mandated by the government and that it cannot supply gas at a price not approved by the government and to a user not listed in its gas utilization policy.

Spokespersons for RIL and Reliance-Anil Dhirubhai Ambani Group, of which RNRL is a part, declined comment since the case is sub-judice.

This allocation has been made in addition to the 40 mscmd of gas allocation to various sectors, made on 9 April.

Of the 20 mscmd allocated on a firm basis, 13 mscmd has been allocated to power companies, followed by 5 mscmd to refineries, 1.91 mscmd to petrochemical firms, 0.44 mscmd to steel makers and 0.17 mscmd to fertilizer companies, petroleum secretary R.S. Pandey told reporters after the eGoM meeting.

Of the fallback-basis gas allocation, power companies have been allocated 12 mscmd, captive power projects (those set up by companies for their own use), 10 mscmd, refineries, 6 mscmd and city gas distributors, 2 mscmd.

The gas was allotted to customers by the government in keeping with the country’s gas utilization policy which forms the basis on which the government has prioritized allotment of gas, with existing fertilizer units ranking first, followed by existing power, petrochemical and city gas projects.

This allocation comes after RIL asked the government to immediately name customers for an additional 25 mscmd of gas so as to avoid “irreversible damage" to the field reservoirs because gas flow was being artificially restricted.

“We are glad to note that the eGoM has additionally allocated 20 mscmd of gas on a firm basis and 30 mscmd on a fall-back basis from the KG D6 block. With the additional allocation, we will be able to increase and maximize production for the benefit of all stakeholders.

The additional allocation will also increase the overall customer base for supply of gas, thereby avoiding frequent changes in the production level from the block." said a spokesperson for RIL in an email.