Thanks for Visiting Mint
You seem to have an Ad Blocker on. Please turn it off in order to continue, or whitelist Mint
HOW TO TURN OFF AD BLOCKER
OR
REFRESH IF YOU ALREADY TURNED OFF THE AD BLOCKER
Home >Home Page >Liberhan report leak stalls Parliament

New Delhi: The leak of a report investigating the 1992 demolition of the Babri Masjid and the report itself could work to the advantage of the Congress party, or it could revitalize the Bharatiya Janata Party (BJP), said analysts.

The report indicts top leaders of the BJP, and its leak meant there was no business in Parliament for the third consecutive day of the winter session that began on Thursday.

An emergency cabinet meeting has been called for Tuesday morning, according to a government official, although Prime Minister Manmohan Singh is on a visit to the US. The agenda of the meeting, to be chaired by finance minister Pranab Mukherjee, may include clearing the action-taken report (ATR), paving the way for the commission’s findings to be tabled in Parliament.

The findings of the commission headed by a retired judge of the Supreme Court, M.S. Liberhan, reported in The Indian Express on Monday, created an uproar in Parliament, with members of the Opposition accusing the government of leaking the report.

The Liberhan commission was constituted on 16 December 1992 by the Union home ministry, following the demolition of the Babri Masjid in Ayodhya on 6 December and the ensuing riots. After 17 years and 48 extensions, the commission submitted its report on 30 June.

If the Congress party succeeds in using the findings to isolate the BJP and drive a wedge in the Opposition, which has, in the last week united against the ruling United Progressive Alliance (UPA), it will be able to further consolidate its position. Alternatively, the party could, if it mishandles the situation, provide a rallying point to the Opposition at a time when it is seeking to push through major legislative and economic reforms. The Congress-led UPA has a comfortable majority in the Lok Sabha but is a minority in the Rajya Sabha.

Monday’s events seemed to suggest that the Opposition is united. The controversy also diverted the BJP’s energies away from its own internal issues which had, over the past months, resulted in increased pressure on L.K. Advani to demit his charge as the leader of the Opposition. 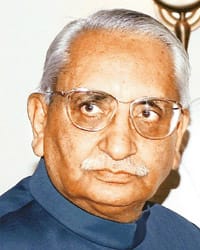 “It is learnt that among others indicted and found culpable— for what the Commission calls pushing the nation to the brink of communal discord—are the entire top brass of the Sangh Parivar. These include the leaderships of the Rashtriya Swayamsevak Sangh (RSS), VHP (the Vishwa Hindu Parishad) and Shiv Sena," TheIndian Express report added.

BJP members attacked the government for the leak.

“I have sought from the government immediate placing of this report on the table of the House. Personally, I am proud of my association with the Ayodhya movement, (although) I was distressed by the demolition of the structure," Advani said.

As the BJP shifted focus from the content of the report to its leakage, one analyst said the party, weakened by dissent and repeated electoral setbacks, and Advani could get a fresh lease of life.

“The leak has for sure made Advani invaluable for the RSS. He has yet again made sure (of) his longevity," said Jyotirmaya Sharma, professor of political science at Hyderabad university.

Another analyst, however, said this would depend on how the government handles the issue.

“This (the report) could work both ways. It might just re-energize the BJP and unite the party. A lot depends on how the government handles it and what the contours of the full report are," said Pratap Bhanu Mehta, president, Centre for Policy Research, a Delhi-based think tank.

“Though we know the electorate today is not for politics of polarization, if the government acts on it in a way that it produces a new kind of polarization, then it might help the BJP. However, it is too early to say what all this means for the party and how it would play out," Mehta added.

Some Congressmen saw the report as another setback for the BJP. Others weren’t as sure. Congress president Sonia Gandhi met party leaders in the evening to discuss the political fallout of the report and the leak.

“This (involvement of senior BJP leaders in the Babri Masjid demolition) is something that had always been known, and with the report they only stand exposed. It comes as very bad news for BJP at a very bad time," said V. Kishore Chandra Deo, senior Congress leader and party general secretary.

A senior Congress leader and general secretary, however, said it was not going to be easy for the Congress party either. “With former prime minister P.V. Narasimha Rao’s name also being mentioned in the report, the BJP is likely to attack the Congress to shake its Muslim support base. The BJP can also play the victim card well, saying that a leader of Vajpayee’s stature has also been indicted. It is an advantage for the Congress only if it makes use of the situation properly," added the leader, who did not want to be identified.

Home minister P. Chidambaram dismissed charges that the government had deliberately leaked the report and reiterated the government’s intention to table the report in the ongoing session of Parliament.

“I refrain from commenting on the correctness or otherwise of the contents of the news story. I can assure the House that there is only one copy of the Liberhan report with the ministry of home affairs and it is in safe custody," Chidambaram said.

The government told the Opposition it couldn’t table the report immediately because it was yet to be translated into Hindi, to which the BJP responded that it was willing to have the report tabled without a translation. Communist Party of India leader D. Raja said the leak had lowered the dignity of the House.

Liz Mathew and PTI contributed to this story.