Islamic students body on a mission for peace

Islamic students body on a mission for peace

New Delhi: Hashmatullah Khan says the combination invites scrutiny: students, computers and Islam. In his case, it gets worse. He is general secretary of the Students Islamic Organisation (SIO).

No, not the Students Islamic Movement of India, better known as SIMI, and effectively banned for alleged extremist activities. But Khan can’t avoid the connotation.

Besides both having educated, young Muslims as members, the groups have the same founding father: the Jamaat-e-Islami Hind (JIH), a semi-political, religious organization, which founded SIO in 1982 after SIMI, that emerged as its offshoot in 1977, broke away from it in 1981.

And so, SIMI and SIO are like estranged family who “shall never meet", says Bishruddin Sharqi, national president of the latter. “It is like two separate groups who do not agree with each other—one that chose peace and another that chose violence," he says.

Blood brothers they may be, but the groups have charted conflicting courses, both in principle and actions. While SIMI is largely underground after the government crackdown, SIO is a gradually swelling student revolution in the making, taking Islam beyond the parodied stereotypes of fundamentalism and violence. Its mission: to prepare students, Muslims and non-Muslims, for reconstruction of a peaceful India on the basis of Islamic principles. 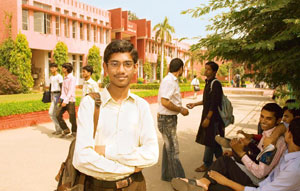 All for education: Subair Ahmad, a student of bachelor’s in philosophy and an SIO member, at Jamia Millia Islamia. He travelled to New Delhi from Coimbatore three years ago after qualifying for a scholarship. Ramesh Pathania / Mint

In one of such rooms on the first floor, Khan, 28, single and soft-spoken, serves as office functionary during the day, and studies at night for a PhD in psychology he hopes to pursue after his two-year term at SIO is over. He studied engineering at Karnataka’s Gulbarga University and did postgraduate work in psychology at Madras University before heading to Delhi to serve at the SIO headquarters in 2006. “They elected me to this post and such responsibility is an honour to carry. We all have to live our lives but running a struggle is a noble task," he says.

Khan is not alone. There are many others, all below 30 and studying to be engineers, doctors and professors. But career advancement for monetary gains is not on SIO’s agenda; the larger goal is to find the roots of culture. “It’s important to know who we are and where we come from. We need an education system that doesn’t just create jobs but makes better human beings out of young people. This is the only solution to corruption and violence," Khan says.

So, along with weekly meetings to discuss the Quran’s teachings, SIO amply harps on the same teachings to help its members introspect and regain the “lost struggle". “There is so much materialism around. Everyone is racing to make money. Families are breaking down and women are being objectified. We are aping the West. We have to struggle for indigenous ideas of development," Nazeer Ahmad Bagdali, office secretary of SIO, explains.

Practically applied, the organization is comfortable with sex education in schools but not for children below puberty. It welcomes reservation for other backward classes (OBCs), but seeks more Central universities for education of minorities.

It launched campaigns for peaceful campuses after the reported incidents of violence at Aligarh Muslim University. Technology as a tool of development and campaign is more than a mere buzzword. Ten years ago, SIO was one of the earliest student groups to have launched its website. Recent addition has been a text messaging service aimed at delivering updates on its activities to its members and associates.

“With India emerging as an IT power, it’s a great opportunity for us to discover cheaper and more effective ways of spreading education. SIO has kept ahead with the changing times and focused on students’ issues more than politics," says S.Q.R. Ilyas, former SIO member who now edits Afkar-e-Milli, an Urdu journal and is also a member of the All India Muslim Personal Law Board.

Like Ilyas, a large number of SIO members graduate to JIH, which works for communal harmony with other religious groups, such as Christians, Sikhs and Hindus. JIH’s leadership includes both Muslim clerics, known as the ulema, and educated professionals and academicians, many of whom were once SIO members. JIH has also worked to influence India’s foreign policy to favour Muslim nations and condemn the policies of Israel and the US.

But SIMI is a past neither JIH nor SIO wants to visit. “We have nothing to do with SIMI and, therefore, we wouldn’t like to talk about it," says Khan in response to persistent queries and veers to SIO’s growing spread across the country, and even in Nagaland and Tripura.

In the years since its inception, the organization has grown to a membership strength of 4,110, in addition to 94,504 associates and 34,358 junior associates. Total units of SIO count up to 621, with more than 3,000 campus branches in universities and 65 branches in religious institutions across the country.

From these institutions, the organization has found its national-level leaders—from states such as Kerala, Karnataka, Bihar, Uttar Pradesh and West Bengal, with degrees in languages—from Arabic to Bangla, history and commerce, among others.

Twenty-year-old Bagdali is one such aspirant from Bidar in Karnataka. Son of an auto-rickshaw driver and eldest among nine siblings, Bagdali’s early days with SIO at his hometown lead him to grow within the organization’s rank and files. Today, he manages office affairs of SIO and pursues his bachelor’s in Urdu literature from Maulana Azad National Urdu University in Hyderabad through distance education mode. “If not for SIO, I wouldn’t have dreamt of education," he says in a rush.

While educational awareness programmes are on SIO’s agenda with special focus on enrolment in schools, educational assistance in the form of scholarships, book banks, libraries, reading rooms, study circles, career guidance, hostels and coaching classes are also arranged for the students.

For women, they have a separate wing—Girls Islamic Organisation, with the same goals and organizational set-up.

One of the scholarship programmes launched by the SIO has helped more than 12,000 students across the country, including Bagdali, attain higher education. Subair Ahmad, a bachelor’s student of philosophy at Delhi’s Jamia Millia Islamia, travelled to Delhi from Coimbatore three years ago after qualifying for a scholarship. “My parents couldn’t have funded my education here. SIO pays my fees and accommodation expenses," Ahmad says.

But the Jamia student is more excited about the fact that he can now speak fluent English. This is part of SIO’s efforts towards education in the English medium, in a break from the traditional madrasa education. The organization is even mulling a universal education programme along the lines of the government-funded Sarva Shiksha Abhiyan and opening of centres funded by the government under the National Institute of Open Schooling in madrasas and Muslim schools for basic education in science and English.

“This is where the future lies. We can’t live in the past and let our youth suffer and feel suffocated. SIO will continue to give them a positive direction and means of peaceful struggle for a better nation," SIO’s national president Sharqi says.

But beneath the robust purpose lurk muted fears. After aggressive campaigns in line with Jamaat’s call for activism on issues such as the contentious Shah Bano judgement of 1985, which called for lifelong alimony for Muslim women after divorce, and the Babri mosque demolition in 1992, SIO’s theme shifted from active struggle to educational goals.

“We as an organization realized that till the time we are educationally backward, no change can be brought about," Ilyas, who is also member of Jamaat’s Babri Mosque Movement Coordination Committee, says. At a convention to celebrate 25 years of the organization last year, SIO members spoke on the threats Islam faced: extremism and misinterpretations of Quran. They also found compelling themes to address in the future: education and dialogue.