New Delhi/Mumbai: Initial attempts by the Union government to use banks to provide subsidies directly to farmers to purchase fertilizers have run into problems and also triggered differences between its different arms.

In meetings held over the past fortnight, different arms of the government discussed using banks as a possible delivery mechanism to give the subsidy directly to farmers. 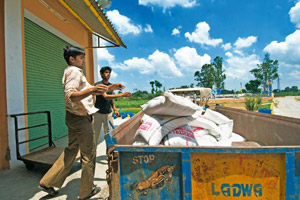 Better solution: The direct subsidy plan is seen as an improvement over the current regime which, analysts say, is complex, opaque, fosters manufacturing inefficiencies and creates entry barriers to investments. Ramesh Pathania / Mint

The direct subsidy plan is seen as a significant improvement over the current subsidy regime by analysts who say the latter is complex, opaque, fosters manufacturing inefficiencies in fertilizer plants and creates entry barriers to investments in the business. They also see it as a way to ensure that benefits accrue directly to farmers.

Explicit subsidies, excluding off-budget items such as fertilizer bonds and oil bonds, add up to Rs1.11 trillion for 2009-10 and make around 11% of the Union government’s annual expenditure of Rs10.2 trillion. One of this government’s articulated priorities is to make sure that farmers directly get fertilizer subsidy, about 45% of the total subsidy.

According to government representatives and officials of some public sector banks who participated in the meeting, the differences centre around the ideal delivery mechanism for direct subsidies. One group said it should be the so-called kisan credit cards (KCCs). Another said it shouldn’t. None of the government representatives and bank officials wanted to be identified given the sensitivity of the issue.

A KCC is similar to any other credit card and is issued by the banking system to farmers. Such cards also provide information on a farmer’s landholding.

According to finance ministry officials who attended the meetings, KCCs won’t work because many farmers have managed to get more than one card. The latest Economic Survey said there were about 80 million KCCs in India. According to one of the finance ministry officials, it is likely that there are around 40 million farmers who, between them, hold 80 million cards. In all, there are around 130 million farmers in the country.

Himanshu, a professor at the Jawaharlal Nehru University who specializes in agricultural issues, said duplicate cards were a “definite problem".

This aside, KCCs are unevenly distributed across states. “Some states have very good coverage, whereas in some states it is pathetic," he said.

Former finance minister (and current home minister) P. Chidambaram had said in late 2005 that 76% of the KCCs had been issued to farmers in just eight of India’s 29 states. Mint could not immediately access a more recent update on the concentration of KCCs.

Both Himanshu and the finance ministry officials said that another reason why KCCs are a poor marker for subsidy distribution is the skew in their distribution—towards the rural elite.

“KCC is linked to land ownership. In practice, banks do not give KCC to landless and tenant farmers. In the context of the rural economy, KCC is targeted at relatively elite sections," said Himanshu who is also a Mint columnist. A large part of the cultivation in India is done by tenant farmers.

Fertilizer ministry officials who have been part of the meeting could not be immediately reached for comment.

The difference of views wasn’t just restricted to different arms of the government.

According to bankers who participated in the meeting, there is a difference between SBI and other public sector banks. SBI’s opinion was that KCCs could be used as markers, but the other banks disagreed, said two bankers and finance ministry officials who were present at the meeting. SBI officials did not respond to repeated phone calls.

According to the bankers, banks fix the credit limit on KCCs at the start of the year. The main components of this loan go towards funding purchase of fertilizers and seeds, and wages of farm labour. This varies across states, even districts within a state.

To give a farmer a subsidy, banks have to ascertain how much fertilizer is needed per acre, bankers said. The proposal to use KCC as an identification marker rests on banks calculating the subsidy for fertilizers, and then giving it to farmers.

The bankers said that except for SBI’s representative, the other bankers present at the meeting were of the opinion that they did not have the means to take up the responsibility of calculating an individual farmer’s subsidy entitlement.

One of these bankers said the proposed model of disbursement was also opposed by everyone, other than SBI’s representative.

This would involve the government transferring the entire subsidy to SBI (amounting to Rs49,980 crore in 2009-10), which would then distribute it to other banks. In the interim, added this banker, SBI would end up with a huge pool of money.