New Delhi: In the beginning, there were Bunty and Bubbly, a contented couple that rode around on Bunty’s motorcycle and occasionally engaged in lascivious behaviour. Then Bunty met Mallika Sherawat, fell in lust, and bumped Bubbly off—only to repeat that callous process when he met (and apparently married) a man named Saif. End of story. 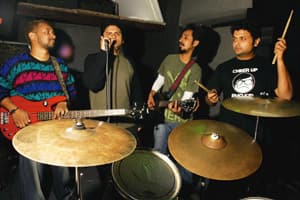 By then, however, the video had already gone viral—5,000 views in the first two days, and 10,000-odd in a week. “In our first live concert, just a few weeks after the video went online, everybody was asking us to play Bunty aur Mallika Sherawat. The audience even knew all the lyrics," Riju Dasgupta, Workshop’s bass player, says with satisfaction. “It was the best first show anybody could have."

In an earlier era, a decade or more ago, Workshop would first have submitted its video—although perhaps not this particular video—to Channel V or MTV, the country’s leading music channels. Now, however, both channels have severely cut back on music programming, in favour of reality shows or game shows; they play roughly 40-50% less music than they did in 2000, and nearly all of what they play is extracted from Bollywood films.

“We have to look at it from the channels’ perspective— that they can’t play Indie videos anymore," Dasgupta says understandingly, possibly because he works at Channel V. So, over the last two years, musicians such as Dasgupta have taken their videos online, primarily to YouTube—with mixed results. “YouTube per se is very potent, but you still need the traditional medium. Online is nothing compared with being on air and having people from Himachal Pradesh say: ‘We saw you on TV.’"

The shift in the programming mix of music channels started around 2000-01, reckons Prem Kamath, head of Channel V, and it culminated in a recent Channel V decision to play no more English music.

“The early 2000s coincided with Bollywood waking up to the fact that the music video is the best way to market a movie," Kamath says. “And we’ve always maintained that we’re faithful to the audience and not to the genre. So yes, V was launched as a pure music channel, but audience tastes have shifted in a certain manner, and we’ve followed that shift."

But in the 1990s, when satellite television was still finding its feet in India, it was more open to experimentation; the less gracious version has it that the channels were hungry for any original content at all, even Indie videos. “Music channels back then wanted to know what people liked," remembers Arjun Ravi, editor of Indiecision, a webzine devoted to independent music in India. “Once they found out what was profitable, it was a simple business decision." That interim process of trial and error, however, accorded many fledgling rock and Indipop musicians an unexpectedly bright spotlight.

Ravi particularly recalls Top of the Rock, an Indus Creed single that was heavily played on MTV when the channel launched in India; the generous airtime would help earn the band an MTV Asia Video Music Award.

Shooting such videos was far more expensive then, says Uday Benegal, Indus Creed’s lead singer. “Even after pulling in favours, we spent Rs3 lakh on a video, whereas you can do it so much cheaper now," he points out. “But there was no question—the exposure we got was absolutely fantastic. Not being on television definitely constricts the reach of a band today."

The other genre popular on television at the time, Indipop, “basically shot itself in both its feet, hands and various other parts of the body", Benegal remarks. “It was pervaded by people who wanted to be famous, not people who enjoyed what they were doing. There were only a couple of good musicians: Lucky Ali was there, and Suneeta Rao."

Rao, whose videos for her songs Pari Hoon Main and Kesariya remained on MTV and Channel V for many consecutive weeks in the mid-1990s, continues to make videos for her music, releasing them on television as well as online. One of her recent videos, Sun Zara, “got barely two weeks on television", Rao says. “Often, your video doesn’t get on the air for weeks. People seem to be interested only in seeing some poor creature get miserable on some reality show. In such a situation, YouTube isn’t an alternative—it’s the only way left."

As bleak as Rao’s assessment is, there is a matching vein of optimism within the industry. Samira Kanwar, owner of Babble Fish Productions, has made videos for Pentagram, the Raghu Dixit Project and Them Clones, among others, and she exults in the feedback her videos receive online, as well as the lower cost—often as low as Rs50,000—for which a video can be made. “After all, it’s nearly twice as hard now to get a video onto television, as compared to 10 years ago," she says. “And the low budgets for online videos are a huge advantage for upcoming independent bands."

Indiecision’s Ravi even conjectures that television may now have lost its relevance, and that the real audiences of Indie bands, in any case, spend more time online than on MTV; as proof, he points to Them Clones’ video for its track My Life, an animated film that he suspects got greater traction online than on VH1.

But the 12,500 views on YouTube notwithstanding, Them Clones itself isn’t convinced. “There’s a lot of hoopla about online promotions being effective even if it isn’t supported by television, but it isn’t true," Surojit Dev, the band’s drummer, says. “For instance, I discovered a band called Kings of Leon only because I saw their video on VH1, and that prompted me to go online and search for them. So, it has to go hand in hand."

Them Clones was founded in 2000, so Dev remembers well the fallow period in the early years of this decade when music channels had already started to spurn Indian bands and when YouTube and Facebook had not yet hit a critical mass in India.

Dev is alive to the deficiencies of the Internet as a “pull" medium, in which people will be drawn largely to content within their comfort zone, and in which a YouTube video still has to be promoted through Facebook and email. “Not to say that it was all easy 13 or 14 years ago," he adds with a laugh. “Bands competed with bhangra then, and they compete with reality shows now."

The battle has changed and grown more heated; it’s just that, in the Internet, the bands at last have found an exit strategy.