Base effect to boost profit, sales

Base effect to boost profit, sales

Mumbai: Indian companies are set to report a surge in profit and sales for the quarter ended March when the earnings season begins next week with Infosys Technologies Ltd announcing its results on 13 April.

The acceleration may be markedly sharp because sales and profit were depressed in the same period in 2009, according to an assortment of brokerages. 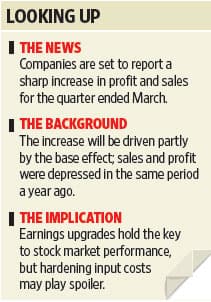 “We will see good earnings for the quarter mainly because of the base effect," said Raamdeo Agarwal, co-founder and director at Motilal Oswal Financial Services Ltd, who expects around 30% growth in quarterly profit for the firms that make up the 30-stock benchmark Bombay Stock Exchange Sensex. In the year earlier period, profit at the Sensex firms rose 5.4% while sales were flat.

Growth in the fourth quarter may be driven by automobiles, metals and information technology firms, analysts said.

“Whether you look at cement, steel, auto or IIP (Index of Industrial Production) numbers, they have all been good," said Deepak Jasani, head of retail research at HDFC Securities Ltd. “Top line has also grown and volume numbers have been encouraging. Therefore, the earnings numbers should broadly be good."

Auto sales, an important barometer of economic health and consumer sentiment, have grown 26% since the start of fiscal 2010. IIP numbers for January 2010, the latest available, showed growth of 16.7% from a year ago, driven largely by the manufacturing sector, which grew 17.9%.

Profits for 27 of the 30 Sensex firms (the numbers of which were available for at least 10 quarters) were the best in two years for the three months ended December 2009. During the quarter, Sensex firms’ profits grew 18.63% collectively, while sales grew 21%.

Some analysts say the growth in sales may not translate into profit gains because of higher commodity prices.

“As expected, margin pressure would re-emerge and become more evident in Q4," wrote Dhananjay Sinha, analyst at Centrum Broking Pvt. Ltd, in a 30 March note. “Most sectors are likely to witness margin contraction. We believe commodity prices would remain firm, at least till mid-2010, resulting in margin pressure for most of financial year 2011."

While some brokerages see progressive improvement in the quarters ahead, others are not quite as ebullient, seeing a host of problems awaiting Indian firms.

In short, “the process of elimination eliminates nearly everything" when it comes to picking a large-cap stock, they wrote.

The Sensex, which has gained 118% since the lows of a year ago, has moved in a narrow range since September. It has gained only 2.5% in the past six months and is trading at 16 times the projected earnings for fiscal 2011, and the next step up will only come up with earnings upgrades, analysts say.

Centrum and Kotak are cautious about upgrades, citing the exit of accommodative monetary and fiscal policies. Inflation in February, measured by the monthly Wholesale Price Index, was 9.89%, dangerously close to double digits. Economists are also forecasting increases of as much as 1.5 percentage point in key policy rates by the Reserve Bank of India in this calendar year.

Others such as Jasani of HDFC Securities would prefer to wait for the monsoons—a critical indicator of how the agricultural sector that employs around 60% of India’s working population will fare—before taking a call, while others such as Angel Broking Ltd are exuberant.

“Signs of economic improvement are getting stronger in India," Angel’s research team wrote in a 30 March note. “Correspondingly, earnings expectations from corporate India for financial year 2011 are increasing."

The team has revised upwards its earnings estimates for metal stocks by 10-20% and has made similar upgrades for other sectors. It also projected that Sensex companies would register 27% annual earnings growth over the next two years.

Nonetheless, most brokerages acknowledge that capital expenditure might take some more time in picking up.

“Definitely, there will be a revival in the capital expenditure cycle but it won’t be exuberant, given the expectations that the Reserve Bank of India would harden rates," said Madhusudan Sarda, director of research at Mehta Equities Ltd. “There is a feeling that the demand side would be growing faster than the supply side. Only after six months, when the rates begin to soften, will we see more action."