Species change habits, habitats in their struggle for survival

Species change habits, habitats in their struggle for survival

New Delhi: On average, a mosquito has three “blood feeds" during its 21-day life cycle. But, as temperatures rise, the life cycle of these cold-blooded creatures has speeded up, increasing their feeding rate, or general bloodthirstiness, alarmingly. 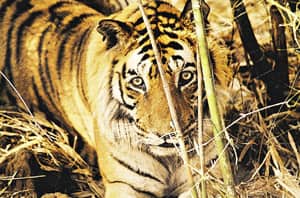 External imbalances: A vast number of creatures in the food chain, including the tiger, have been affected due to changes in the climate. Hindustan Times

Higher temperatures have also made it easier for species such as anopheles that breed in fresh water to move to stagnant water and spread faster in urban areas. The implications? Fatter mosquitoes and more diseases through the year.

Everybody, it seems, is trying to live with climate change. While the mosquitoes are feasting, at the other end of the food chain, the Royal Bengal tiger is scrounging.

The mosquito and the tiger are just the two ends of the spectrum of creatures impacted by increasing temperatures, erratic rainfall, and various other vagaries of climate change. A vast number of creatures that lie in between have been equally affected.

As has an army of naturalists, biologists, entomologists and ornithologists, who are suddenly dusting off their binoculars, resurrecting old projects and embarking frenetically on new ones. India’s new-found prominence in the global climate change debate in Copenhagen has given their work a certain urgency and impetus.

Pranabes Sanyal, an advisor at the School of Oceanographic Studies, Jadavpur University, has been tracking the tigers in the mangroves and tidal creeks of the Sunderbans for 30 years. “The last 10 years have been bad," he says. “The tigers have been migrating north to the densely populated areas of the delta."

Global sea levels have been rising at 2mm a year, but in the Sunderbans, the increase has been 3.4mm a year, according to Sanyal. Low-lying sea facing islands in the southern Sunderbans have already disappeared, and salinity at the mouth of the delta has increased from 17 parts per 1,000 in 1994 to 26 parts per 1,000 in 2009. It’s an increase the tigers are finding difficult to adapt to.

The tigers have been left with no alternative but to migrate north, where increasing competition for food has not only led to some radical changes in their diet, but has also brought them in conflict with humans.

Just how scarce food is is evident from recent incidents where they’ve been spotted eating king cobras. “It’s unheard of," says Sanyal. “I’ve never seen it in 30 years."

Tigers living on dry land have also been moving northwards to escape rising temperatures. In West Bengal, they have been migrating from the Buxa Tiger Reserve to the Bhutan hills, and from the Gorumara National Park to the 10,000ft high Neora Valley National Park.

In the dusty scrub forests near Jodhpur, L.S. Rajpurohit, an assistant zoology professor of Jai Narain Vyas University, is studying the increasing aggressiveness of the Hanuman langur. He’s been tracking the creatures for the last 25 years and is familiar with the 32 troops that live in the area. Troubled: A langur at the Sariska Tiger Reserve in Alwar, Rajasthan

Rajpurohit and a few colleagues recently presented a paper on the subject at a conference in Nainital. They’re now looking to explore the possible connection between climate change and the increasing frequency of infanticide in Hanuman langurs.

In another part of the country, Arun Pratap Singh, a scientist at the Forest Research Institute, Dehradun, has been studying butterflies. The changes in the climate of the foothills and lower reaches of the western Himalayas has been very severe, he says. Not only have temperatures increased drastically, but humidity levels too have gone up.

The most dramatic indicator of this change is the invasion of the Red Pierrot butterfly. Once confined to peninsular and eastern India, this species is now commonly found in the lower western Himalayan ranges, Shivalik foothills and even in Delhi.

Its favourite food source, the Kalanchoe plant, is also now found in abundance in degraded forest patches in the area.

Another species that has spread far beyond its original habitat is the Brown Gorgon. “It was once found only in the north-east and Sikkim, but I recently found it breeding at Kedarnath," says Singh.

Along with changes in distribution, butterfly habits are also changing. Longer summers have meant that they hibernate late and emerge early. It’s too early to say what its long term effect will be, but Singh is sure it will be severe.

The worst impact of climate change has, however, been reserved for birds. Most scientists agree they are the most susceptible group, and a good indicator of the severity of the change.

Singh, who has also been studying birds, observes that species which usually descended to the foothills by late October now remain in the mountains until mid-December. Egrets and Cormorants have moved to higher altitudes, appearing in a place such as Uttarkashi where they were never found.

Similar anomalies have been found by the scientists of bird migration study centre of the Bombay Natural History Society (BNHS) at Point Calimere, Tamil Nadu. According to S. Balachandran, assistant director of the centre, migrants such as Seagulls and Terns at Point Calimere normally leave for the Persian Gulf in winter, but haven’t done so this year.

The arrival of migrants into India has also been delayed, often by up to a month. A recent field trip to West Bengal and Assam, says Balachandran, revealed not a single one of the species, such as Shovellers and Pintails, that usually come to the area.

Suhel Quader, editor of Forktail, a journal of Asian ornithology, adds another example to the list. The Great Crested Grebe, he says, found on the border of Gujarat and Diu, used to be a completely migratory species, breeding in its summer home in northern Eurasia.

But for the last many years, it has been staying back and nesting in India.

The main fear of this disruption of migratory patterns, he says is that “the time when birds migrate and the time when their food is most abundant may get out of sync, in which case the birds may suffer."

This is apparently already happening in a species of flycatchers in northern Europe.

Despite the effect climate change has had on birds, Quader complains that few systematic studies have been done in India. “There’s no shortage of funding, and there’s no reason for us not to do detailed studies," he says.

Quader has started a citizens’ initiative called MigrantWatch that gathers observation data for migratory species from around the country. The idea is to build a baseline of information on migration, so that future patterns can be compared with it.

“Projects like this are long overdue," he says. “If we had baseline information from 20 or 30 years ago, we would be in a much better position to say how India’s birds and other animals are responding to climate change."