Home / Home-page / India, US close to social security pact
Back
Share Via

New Delhi: India and the US are close to clinching a long-pending agreement that will link the social security systems of both countries and thereby allow workers from each country to draw the benefits from their contributions.

In the absence of the totalization agreement, which is likely to be inked during President Barack Obama’s visit later this year, expatriate workers from each country forfeit their contributions if they do not meet the criteria.

“Earlier there was a deadlock on the agreement. The US was not very receptive about it. But now both the countries have agreed to share data by September giving details of Indian and US workers in the respective countries and their contributions," said a senior government official who did not want to be named.

The ministry of overseas affairs, ministry of commerce and the department of information technology (IT) along with the US-India Information and Communication Technology working group, who have been pursuing the matter, have held meetings in the past one month to clear the decks before Obama’s visit.

To take the talks further, a delegation from the US is visiting India later this year to finalize the agreement. “Before this, officials from both countries will try and negotiate the agreement via video conferencing in October. We expect that everything will be in place before Obama’s visit," the official added.

A senior home ministry official, who was privy to the developments but did not want to be identified, said, “We are providing our inputs to the overseas affairs ministry." 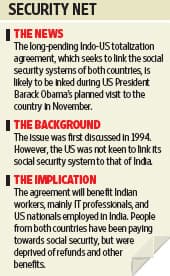 The US state department could not be reached immediately. A person familiar with the developments maintained that the agreement was a “deliverable", which both sides were hoping to ink during the President’s visit.

IT lobby group Nasscom has been lobbying the Prime Minister’s Office for inclusion of the totalization agreement in the US President’s agenda for discussions. Indian professionals, particularly from the software sector, who work on short-term visas, lose out in the absence of a deal.

According to Nasscom estimates, in absence of a totalization agreement, Indian IT firms and professionals pay in excess of $1 billion (Rs4,630 crore) every year to the US in the form of social security, with no benefit or refund. To qualify for a social security refund, expatriates have to continuously work in the US for 40 quarters, or 10 years.

“A significant portion of the salary of professionals is lost due to the lack of such an agreement," said Ameet Nivsarkar, vice-president of Nasscom, which has been pushing for the agreement to be signed for many years now.

However, the agreement will not help in claiming refunds retrospectively.

According to the fresh recommendations, the Indian government has asked for exemptions for those classes of workers employed on the L-1 visa, which deals with inter-company transfers. For others, such as those on H-1B visas, the government has asked for aggregation of contribution in India and the US. In such a case, an Indian citizen who has already contributed towards the US social security benefits will be eligible to the benefits in proportion to the number of years for which he/she has made the contribution.

The government has also recommended portability of benefits, which means that benefits should be provided to eligible people irrespective of their country of residence.

India has had three rounds of discussions with Washington so far—in 2007, 2008 and the latest in May. The country has totalization agreements with nine countries—Belgium, France, Germany, Switzerland, the Netherlands, Hungary, the Czech Republic, Denmark and Luxembourg.

Though talks on the issue began in 1994, not much progress could be made. The bone of contention was the way India has structured its social security structure, which the US felt was different from its own and so could not be linked. “Major headway has been made on the issue now as the US, after debating on it for years, has now recognized that India’s social security scheme is similar to theirs," said the official.