New Delhi: Students aspiring for entry into the elite Indian Institutes of Technology (IITs) were put on notice on Monday that it would be as important for them to perform well in their class XII boards as in the test that will qualify them for admission to the country’s premier engineering schools.

The IITs, which are seeking to improve the quality of their student intake, will soon work out a way to give more weightage to an applicant’s class XII marks in the IIT-Joint Entrance Examination (IIT-JEE), the entrance test conducted for admission to the 15 IITs, the Institute of Technology, Banaras Hindu University, and the Indian School of Mines, Dhanbad.

The aim is to make students study equally hard for their class XII boards as they do for the IIT-JEE and to discourage the mushrooming growth of expensive coaching centres that prepare aspirants for entry into the country’s premier engineering institutes, diverting their attention from the school-leaving exams. It’s a part of a broad effort to revamp the elite institutions that claim to attract the best and the brightest of Indian students.

“Several teaching shops have mushroomed all over the country, which basically persuade students to get into the IITs," human resource development (HRD) minister Kapil Sibal said on Monday. “This makes students neglect their class XII exams. We want the money minting business of the coaching institutes to stop." 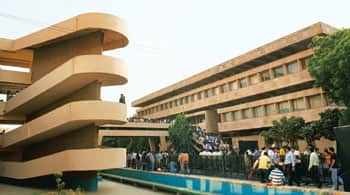 Seeking stronger schooling: Indian Institute of Technology (IIT), Delhi. Officials at the IITs argue that the quality of students who gain admission has been declining rapidly since 2005. Harikrishna Katragadda / Mint

While the minister said he would ideally like the eligibility criteria of a minimum of 60% marks in class XII boards to be raised to 80-85%, officials at the IITs said the institutes were considering two ways of enhancing the weightage.

“One way is that the minimum eligibility criteria of 60% to write the IIT-JEE exams is raised to a higher percentage, say 70-80%. The other way is to work out a marking system where, while assessing a student for admission into the IITs, 70% of weightage is given to his score at IIT-JEE and 30% to his marks in plus two," said IIT Guwahati director Gautam Barua.

The announcement follows a series of reforms introduced in IIT-JEE in 2006, when the HRD ministry first approved the factoring in of school results in the admission process for the elite schools. Only those students who secure a first class or equivalent in the class XII examinations and pass JEE were made eligible for admission to the IITs.

The HRD ministry thinks that the eligibility cap of a minimum 60% marks is not enough. “Weightage will be enhanced so that students who do not do well in their class XII boards do not get into the IITs," Sibal said.

The measure is part of broader reforms being considered for IIT-JEE, a report on which will be prepared in January. In more than 45 years of the exam, IIT-JEE has undergone several changes relating to its structure and content. Initially, there were four subjects in IIT-JEE, the English language paper being an additional subject.

During 2000-2005, IIT-JEE also had a screening test to reduce the heavy load on the main examination by screening only about 20,000 top-scoring candidates. In 1997, the admission test was conducted twice after the question paper was leaked in some centres.

In September 2005, an analysis group comprising directors of all the IITs announced major reforms in the IIT-JEE, implemented from 2006 onwards. In 2008, the director and dean of IIT Madras, M.S. Ananth, called for revamping the test, saying that the coaching institutes were “steering many less-than-best students" to crack the test and keeping female students from qualifying.

The current bid to enhance the weightage given to class XII exams stems from the concern at IITs that the present system does not allow for the 12 years of schooling to have a bearing on admission into IITs.

Officials at the IITs also argue that the quality of students who gain admission has been declining rapidly since 2005. Sanjay Dhande, director of IIT Kanpur, said coaching institutes were encouraging “artificial intelligence".

“Coaching classes create an input which is highly synthesized. The IITs need intelligent, high-quality students, which can happen only when one has done consistently well in school," he said.

Sibal said the government is also setting up a committee to be headed by eminent scientist and chairman of the Atomic Energy Commission of India Anil Kakodkar to suggest a road map for the IITs on research and attracting faculty.

The government also announced the formation of a collegium for the appointment of directors at the IITs, a procedure also announced for the Indian Institutes of Management last week, to ensure greater autonomy in their administrative affairs.

Stressing the need for IITs to evolve, the HRD minister said in case foreign investment is offered in setting up of the new IITs, the government would work out details on how that can happen.

Faculty members at IIT will now also be eligible for additional performance-based incentives, details of which will be worked out by the IITs themselves, Sibal said.

The changes could make it easier for the premier institutes to attract talent.