New Delhi: The prospect of an early transition to a single goods and services tax (GST) revived significantly after the Union government announced an enhanced compensation package for states a day before its meeting with state finance ministers.

The Union cabinet on Thursday approved ₹ 1,000 crore more than the R 12,000 crore demanded by states as compensation for giving up their right to impose an indirect levy on inter-state movement of goods, the Central sales tax (CST). CST has to be phased out under the proposed GST regime, a move the states have been wary about. 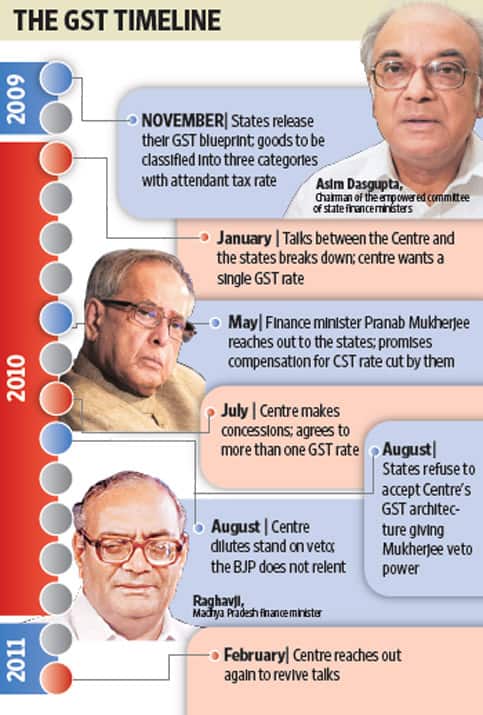 As CST is not expected to be a part of the proposed GST architecture, states have cut the rate by half to the current level of 2% to facilitate a roll-out of GST. In the last budget, finance minister Pranab Mukherjee provided ₹ 10,000 crore as compensation to states for having lost revenue on account of the cut in CST rates. The additional compensation on Thursday takes the total compensation to ₹ 13,000 crore this fiscal.

The Business Standard on 7 February reported the Centre had tried to offset states’ fears that GST would mean a loss of autonomy to raise revenue with a proposal that would limit the extent of constitutional amendments needed to roll out the new tax system. The proposal aims to introduce enough flexibility in the GST architecture to soothe wary states.

GST is India’s most far-reaching tax reform, which aims to integrate the country into a common market by dismantling fiscal barriers between states. The benefits are expected to include lower prices for customers and enhanced competitiveness of the Indian industry.

In December, West Bengal finance minister Asim Dasgupta, who heads the states’ grouping that holds talks on GST, said their estimate of revenue loss in fiscal 2011 on account of a CST cut was ₹ 20,000 crore. The states wanted an early release of at least 60% of the compensation on account of the revenue loss and were willing to negotiate for the residual amount, he said.

The Centre has now decided to release 65% of the states’ own estimate of revenue loss this fiscal. Last fiscal, talks between the Centre and the states floundered over disputes on the extent of revenue loss and compensation. State finance ministers had pointed to disputes over compensation to explain why they were wary of signing away powers to unilaterally change tax rates in a GST regime.

On Wednesday, Mukherjee had made a public reference to the states’ fears at a book release function. He cited ushering in GST as his toughest challenge and acknowledged the states’ fears of being stuck without revenue-raising options down the line in the event of a local problem.

According to Satya Poddar, partner at audit and consulting firm Ernst and Young, flexibility in the architecture could be introduced as long as some basic pre-conditions are met.

Allowing tax credits across state boundaries and a common tax base are necessary conditions, he said. In addition, a common rate between services and goods would remove a key source of disputes and litigation. “A single integrated tax rate in goods and services is a phenomenal achievement," Poddar added.

Over the last few months, GST negotiations have been adversely affected by the deteriorating relationship between the United Progressive Alliance government and the principal opposition party, the Bharatiya Janata Party.

The Centre’s recent moves to reach out to the states may not pay off immediately. Some states remain wary.

According to Madhya Pradesh finance minister Raghavji (he uses one name), the Centre’s recent proposal on GST architecture does not offset the states’ fears over the loss of fiscal autonomy and its consequences.

According to Poddar, a uniform tax rate across the states is not essential to reap the benefits of a fiscal integration of India. The basic pre-conditions would, by themselves, yield benefits, he said.