New Delhi: A few years ago, when he was working in Mumbai, Akhileshwar Sahay learnt that he had won a Nobel Prize. As he drove home that day, he saw congratulatory posters lining his route, all emblazoned with his face and gushing with accolades. This was why, he told his family, Amitabh Bachchan would soon host a special episode of Kaun Banega Crorepati, quizzing contestants on the details of Sahay’s life. Then he sat back to watch himself on the evening news.

Listen to a podcast with Dr. Vijay Nagaswami, a Chennai based psychiatrist and a former deputy director of the Schizophrenia Research Foundation explain what constitutes bipolar disorder, schizophrenia and Multiple Personality disorder. Download here

Except, of course, none of this had actually happened. His delusions of Nobel glory were part of Sahay’s second of two severe manic attacks, registered over what have now been 12 years of a life with bipolar disorder. This was the attack, Sahay says, that yanked him out of denial and returned him to his medication. It was also the start of his personal glasnost, an openness with his colleagues and clients about his bipolar disorder, rarely found among working professionals with mental illnesses. 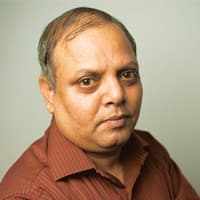 Career concern: Sahay has been fortunate to have supportive employers. Harikrishna Katragadda / Mint

Sahay, a stocky man of 50, is the director of the transportation division at Feedback Ventures, a Gurgaon-based infrastructure services firm where he has worked since 2002. He is a voluble, entrancing speaker, easy to converse with, but difficult to interrupt. His fingers, as they light one of the many cigarettes he smokes each day, quiver with a barely perceptible tremor—a possible side effect of sodium valproate, his primary medication, but perhaps also a sign of his high nervous energy. “I’m a very impatient person," he says.

Sahay always had vast reservoirs of energy. In his early 20s, he worked night shifts at a telegraph office in Patna and studied during the day for his master’s in mathematics. After his degree, he worked first at State Bank of India and then, having missed entering the civil services “by a whisker", in the accounts division of Indian Railways.

From 1991 to 1997, he was on deputation to the Konkan Railway Corp. Ltd, almost single-handedly responsible for mobilizing funds for four of those years. “I worked 18- or 20-hour days," he says. “Sometimes, I would go a week or 10 days without any sleep at all."

At the time, there was no obvious sign of the trouble to come, although in retrospect Sahay thinks those four years were one long phase of hypomania—a mood more manic than normal, but not dangerously so, often associated with riffs of outstanding creativity.

“Once in a while, I thought he was on a short fuse. He’d get agitated very fast, and I put it down to his blood pressure," remembers R.K. Sinha, director (finance) at the Delhi Metro Rail Corp. Ltd (DMRC), who worked with Sahay in Konkan Railway. “But nothing seemed abnormal."

Only when Sahay moved to Essar Steel Ltd did his bipolar depression bloom into its disruptive worst, ignited as much by the accreted stresses of those four years as by the demands of a new job. Sahay suddenly grew anxious about his abilities, and he imagined himself being sidelined.

E. Sreedharan, managing director of DMRC and former head of Konkan Railway, recalls how Sahay came to his house one evening, a few months after joining Essar: “He looked really depressed." After one nervous breakdown during a drive to his office, Sahay was treated for clinical depression; it took another breakdown for his doctor to make the right diagnosis.

On one of Sahay’s medical charts, his psychiatrist has sketched the basic pattern of bipolar disorder, a sinusoidal alternation between crests of manic activity and troughs of depression. The disorder is triggered by chemical imbalances in the brain, just as the more debilitating schizophrenia is, but science knows no exact cause or cure, only heavy-handed drugs to manage it. One person in 100 suffers from severe bipolar, and another two or three from milder versions; Sahay points out that in India, this constitutes a huge, potentially productive segment of the workforce.

But for many of these people, their illness is a dark secret, to be nursed privately. “They don’t disclose the facts to their employees or peers for fear of rejection or stigmatization," says R. Thara, director of the Schizophrenia Research Foundation in Chennai. To admit to a mental disorder is regarded as such an efficient slayer of careers that, apart from Sahay, other similarly afflicted people whom Mint spoke to, requested to be quoted anonymously, simply because few in their immediate world knew about their illness.

There is, for instance, the case of an educationist in Mumbai, who has not yet told her colleagues or students about her history of schizophrenia.

When the illness first struck her, she was working in the public sector, and she promptly lost a promotion that she had earned. “People felt I was feeding on the organization, just coming in, sitting, and going home," she says.

Thus burned, in all but one of her subsequent job interviews, she never brought up her schizophrenia. “Legally, people don’t have to tell prospective employers that they have AIDS," she says. “So why tell them about this, which cannot be transmitted?"

In her previous position, at a leading investment bank, she told her colleagues after five months of working there. “It was a large organization, which helped," she says. “They know the rules and the procedures."

Other stories prove Sahay’s point: that he has been fortunate in having supportive employers. In Mumbai, a schizophrenic PhD in mathematics has struggled to find a job for a decade. In Delhi, one man tells of his mother, a criminal lawyer whose bipolar disorder effectively ended her career. Thara remembers an officer on a ship with a disorder stoked by seasonal changes. “As the ship reached colder regions, he would get into depression and do poorly at work," she says. “As the sun came up, he would improve."

Managing such employees presents distinct challenges. In 1994 and 2004, two issues of the Harvard Business Review devoted entire case studies to managing professionals with mental illness. As many as “5-10% of corporate America’s senior executives may be manic-depressive, with more than 90% going undiagnosed and untreated", a pair of psychiatrists estimated.

‘Flying off the handle’

The chairman of Feedback Ventures Pvt. Ltd, Vinayak Chatterjee, knew about Sahay’s illness when he hired him, and he says that the firm had to adapt around Sahay. “We had to get used to his taking sudden bursts of leave," he says. “He could be euphoric or extremely depressive. If it was particularly acute, he would be irritable, prone to flying off the handle at meetings with sharp points of view. We just kept our cool." There are also logistical accommodations to be made. If Sahay has a meeting in another city, he always flies in the evening before, to get the full night’s sleep he requires.

But if the employee can demonstrate value, as Sahay has done, Chatterjee thinks that Indian companies deal well with such situations. One former Konkan Railway colleague repeatedly praises Sahay’s incisive thinking; Sreedharan calls Sahay “a very clever boy", which is why he did not hesitate to award him DMRC consulting assignments even when Sahay’s condition hit its nadir, in 2000 and 2001. “This doesn’t have to be a charity—there can actually be a benefit to hiring such people," Sahay says. “People can be made professionally productive. In the case of manic depression, you can even be among the best employees."

Standing outside the Delhi airport, preparing to catch a flight, Sahay is intentionally blunt about his illness. “Even now, if I don’t take my medicines for seven days, I will go back to being insane," he says. “Right now, I’m only in remission, and there’s no telling how long I will be in remission." His fellow manic-depressives, Sahay says, need to “have the sort of supportive rainbow coalition I had" if they have to enjoy a career. He checks his watch, stubs out his cigarette, and decides to head into the terminal. He can’t afford to miss his flight. It is the last in the day to Patna, and he needs to take his medicines and sleep them off if he is to go back to work tomorrow.