Mumbai: He has trumped Bollywood repeatedly at the box office. Now, Rajnikanth, the south Indian superstar with the slick moves, can claim victory even at the bookstore. 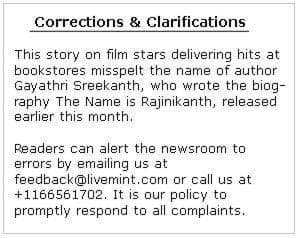 Written by Gayathri Srikanth, an ophthalmologist from Chennai, The Name is Rajnikanth reflects a nascent boom in publishing books about film, as growing global interest in Indian cinema and the rise of the multiplex fuel a demand for in-depth information on celebrities. The business of non-fiction entertainment publishing, in English, is now estimated to be worth about Rs10 crore in India, with the entire non-fiction publishing market tipped at 25 or 30 times that, according to Penguin India.

Om Books, which published The Name is Rajnikanth and distributed King of Bollywood in India—it is published internationally by Wa-rner Books— is expecting one-third of its total turnover this year to come from the non-fiction entertainment sector. 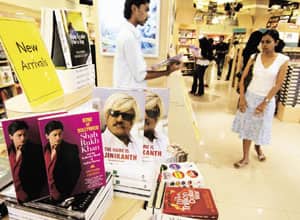 Box office to books: Copies of the biographies of Shah Rukh Khan and Rajnikanth on display at a bookshop in Mumbai. (Abhijit Bhatlekar / Mint)

“Audiences used to be shady and cinema halls decrepit," says Ajay Mago, publisher at Om Books, which agreed to publish The Name is Rajnikanth after just one look. “With the rise of multiplexes, more people go to the movies, and in order to buy books about the movies, you have to go to the movies. People now have the information they need to want to buy a book."

Fan clubs around the world snapped up around 4,000 of the initial 20,000 copies sold of The Name is Rajnikanth, with clubs in Malaysia ordering the highest share of 1,200 books. Dubai came in a close second at 1,000, followed by Singapore at 600 copies, the UK with 300 copies and 250 purchased by fans in Indonesia. Orders have also come in from Sri Lanka and South Africa, according to Mago, who offers distributors and bulk buyers a 40% discount.

Demand for a Tamil version of the book from book stores and fans in rural areas prompted Om Books to bring forward a publication date from mid-September to next month, a version Shreekant is now finishing. Landmark saw about 80% of its sales of the book in Chennai, according to Hemu Ramaiah, chief executive and co-founder of the book chain. She added that although pre-orders of the English version had stood at “about a couple of hundred", the company sold 500 books on the first day and about 1,800 during the first week. It has not started taking pre-orders for the Tamil version yet, and Mago said Om Books would start accepted requests from next week.

With the south making up to 70% of total sales, the book examines the life of the award-winning Tamil actor, who is best known for films, including Aarilirunthu Arubathu Varai, Sivaji: The Boss and Chandramukhi.

Author Shreekant, 34, is a first-time writer who drew inspiration from Kaun Banega Crorepati, the game show once hosted by Amitabh Bachchan, and later by Shah Rukh Khan. The mother of two was introduced to an earlier publication on Khan when she appeared on the show and noticed that nothing similar had been produced on Rajnikanth, despite him being one of the most influential and bankable stars in the Indian film industry.

“It was a flash, a sudden thought," says Shreekant. “I am from the south, so I wondered why he was not celebrated," she adds.

“I was not really expecting much of a response, so I am happy with the success it has had," she adds.

From humble origins in Karnataka as the youngest of four children, Rajnikanth showed an interest in acting early on and funded himself through various odd jobs, including a stint working as a bus conductor in Bangalore. He was reportedly paid Rs16 crore for his latest blockbuster Sivaji and is lauded as one of the most enduring and best known names in Indian cinema, with a following from South Africa, to Japan and the US.

Thus, the demand for books in this genre correlates to the global following enjoyed by many of India’s films stars, including Rajnikanth’s popularity in Japan, where Om Books is seeking partners for local and English versions of the book, and Germans’ affinity for Shah Rukh Khan, Mago says.

Prior to the success of The Name is Rajnikanth, which is now on its second print run of 10,000, with 2,500 snapped up in pre-orders, the best-selling Indian-published book on entertainment was Dev Anand’s autobiography Romancing with Life, published by Penguin in 2007. It sold close to 20,000 copies in six months.

Entertainment has only recently become a “legitimate" arena for publishers, notes Udayan Mitra, senior managing editor of Penguin, which published the trail-blazing Sholay: The Making of a Classic, by the film journalist Chopra in 2001.

“This has to do with the consumerism boom in India that has expanded the consumer base for books exponentially," she says, “and also the entertainment industry in India coming into global focus, so that people are now willing to buy books on Bollywood and read about it."

Sholay, the book which has sold 5,000 copies in hardcover and 10,000 in paperback since it was published, paved the way, as publishers realized that despite the cost and time investment, there was a lucrative market in entertainment publishing.

“The paradigm has shifted over the last 10 years," says Chopra. “In the old days, people thought if you became a film journalist, it is because you were not good enough to do anything else. Since then, there has been a boom in publishing and repositioning of the Hindi film market and the genre has attracted serious writers."

But there are drawbacks, says Penguin’s Mitra, who commissions and edits books on film and entertainment, such as the fact that entertainment is still not an entirely professionally-run area.

Additionally, writing is still not a very well-paid profession, and authors struggle to make ends meet. “There is still not very much money in writing," says Chopra, who is married to director Vidhu Vinod Chopra. “In terms of cold hard cash, I can only afford to do this because I am not the main breadwinner of my family. In the four years it took me to write King of Bollywood, I have come out negative in terms of time and money."

Authors can expect to receive about 10% in royalties on the cover price of the book—with up to 25% of royalties earned from the first print run being paid out as an advance in the case of top-selling authors such as Chopra and Shreekant, according to Mago. Based on this formula, Shreekant would be expected to take home nearly Rs10 lakh in royalties in just the first week of publication of The Name is Rajnikanth, which is priced at Rs495.

Yet, Chopra describes as “fabulous" that entire shelves in libraries and book shops are dedicated to non-fiction entertainment writing, as a way of building up a reference collection and preserving India’s cinematic heritage for future generations. She says: “Bollywood is a way into understanding the layers that make up India today."