The national flag carrier employs about 28,000 people. Some 8,000 pilots and engineers—licensed by the aviation regulator—are excluded from this exercise.

“The board approved the VRS plan for employees involving an outlay of ₹ 800 crore on 3 July," an executive said, requesting anonymity. “We have submitted the plan to the ministry of civil aviation and the ministry of finance."

A second Air India executive, who also declined to be named, said the programme is based on norms laid by department of public enterprises and designed on the so-called Gujarat model, formulated by the western state to rehabilitate loss-making textile units in 2001. 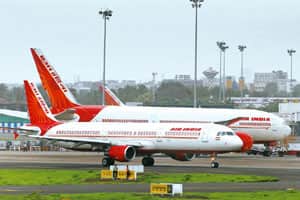 Any 40-year-old employee who has completed 15 years of continuous service will be eligible for the VRS.

The first executive said the average payout will be between ₹ 15 lakh and ₹ 20 lakh paid over a period of 22 months.

In April, the government had approved a ₹ 30,000 crore package to bail out the loss-making state-owned carrier. It includes an upfront equity infusion of ₹ 6,750 crore and assured equity support of ₹ 23,481 crore till 2020-21.

The government has approved a restructuring plan of ₹ 21,348 crore of short-term loans to help the airline stay afloat.

Air India has a fleet of 142 aircraft, and the carrier is planning to phase out old planes and lease out some of its new planes.

Besides, the carrier is planning to transfer 19,400 employees to the aircraft repair and ground-handling divisions. This will drastically bring down the employee-aircraft ratio.

The employee-aircraft ratio at Lufthansa German Airlines is 127:1, Singapore Airlines 140:1 and British Airways 178:1.

The Centre for Asia Pacific (Capa), a consulting firm, said in a note in June that Air India is planning to hive-off its maintenance, repair and overhaul (MRO) and ground-handling subsidiaries as separate entities, into which third-party investors may be invited.

“This is a critical element of the airline’s turnaround plan," the report said.

Capa cautioned that although the integration of the overall organization structures at the former Air India and Indian Airlines has been completed, the integration of human resources has been “ineptly handled and almost wilfully ignored with nobody within the airline senior management or at the level of the government having taken responsibility".

“Issues related to pay, allowances and career progression remain unresolved, particularly with respect to pilots, and this continues to remain a source of industrial unrest going forward," Capa said.

This is the right call by Air India as it has accumulated a lot of legacy cost in terms of staffing, according to him. “Several organizations are trying to boost return on investment by addressing people cost," Chaudhary said. “This will make Air India more comfortable in human resources terms."