Three-day passport project in a week or two

Three-day passport project in a week or two

Mumbai: After missing at least three internal deadlines, the Passport Seva Project, which aims to issue passports in three days compared with the current 45, is finally expected to be launched in “a week or two", said a senior official at the ministry of external affairs. 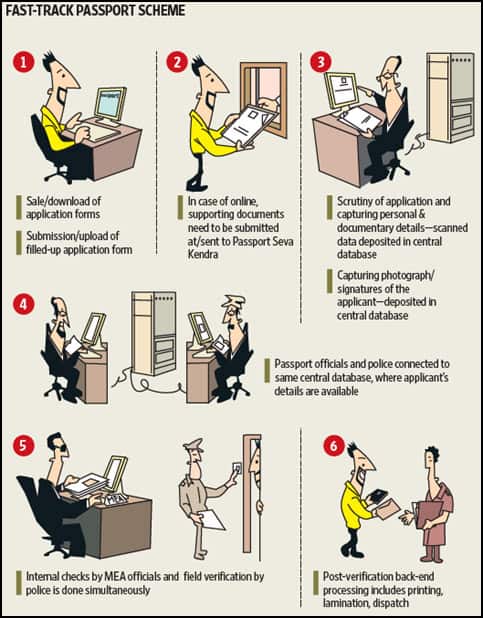 A TCS spokesperson said in an email that the company, as a policy, didn’t comment on individual clients.

Apart from reducing the time needed for issuing new passports to three days from up to 45 days now, after police verification, the project has a fast-track component for issuing passports on the same day an application is submitted, a process that now takes up to 14 days.

The new model will also allow people to submit their passport applications online and maintain a central database that can be accessed by both the police and passport officials, speeding up the police verification process, a bottleneck in the current process.

According to the initial agreement between the ministry and TCS, an internal pilot study was to be launched in Bangalore and Chandigarh in March 2009.

This was to be followed by a roll-out of the project in these two cities three months later in June, followed by a nationwide launch, comprising 77 Passport Seva Kendras and incorporating the 37 regional passport offices, by January 2010.

When the June date was missed, the internal deadline was first moved to October and then to November. Both were not met.

On 13 October, the Hindustan Times reported, quoting an unnamed ministry of external affairs official, that the government had sent a notice to TCS asking it to pay a fine of Rs2 lakh for every week of delay.

The ministry official did not say when a national roll-out was likely.

As of now, Bangalore will go live first, followed by Chandigarh, Amritsar, Ludhiana, Mangalore and Hubli, which are currently in pilot phase.

In December, when a parliamentary standing committee on external affairs pulled up the ministry for the delays, it contended that software development was an “external dependency" and hence it was not in a position to commit on a date for launching the project.

News agency IANS had reported on 19 December that the All India Passport Employee Association had sought the intervention of Shashi Tharoor, minister of state for external affairs, to review the project in view of the delays. The association has a membership of nearly 2,400 employees from regional passport offices across the country.