Does output rise signal a recovery?

Does output rise signal a recovery? 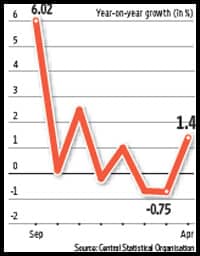 Asia’s largest economies are showing signs of recovering from the global recession as the region’s governments start to implement nearly $950 billion (Rs45.03 trillion) of stimulus measures.

“I think we have now passed the bottom," said Robert Prior-Wandesforde, an economist at HSBC Holdings Plc. in Singapore. “Although the output growth is unlikely to go vertical, improving external and domestic demand will help production grow between 5% and 8% by the end of 2009."

India’s benchmark stock index, the Bombay Stock Exchange’s Sensex, however, lost 1.1% to end the day at 15,237.94. Analysts say the measure may have failed to react positively to the news in the wake of the recent gains it has had.

Also Read IIP: what analysts and economists have to say

Six interest rate cuts since mid-October and three stimulus packages are giving India a boost worth almost 7% of its gross domestic product, the central bank estimates.

The lower borrowing costs, tax cuts on consumer products and higher spending by the government are bolstering local demand even as exports plunge.

Coal production in April rose 13.2%, more than twice the pace in March, while the growth in cement output accelerated to 11.7%.

Manufacturing expanded at the fastest pace in eight months in May, helped by domestic demand, according to Markit Economics’ purchasing managers’ index. India’s exports fell 33.2% from a year earlier in April as the global recession cut demand for the nation’s goods.

“Governments the world over are relying on higher spending to expand opportunities for growth of output and employment," Prime Minister Manmohan Singh told Parliament in New Delhi on 9 June. “That is what we should do without worrying about the widening fiscal deficit," he said.

The government will increase spending and plans to allow greater overseas investment to revive an economy growing at the slowest pace since 2003, according to the Prime Minister, who was re-elected for a second five-year term last month. Union finance minister Pranab Mukherjee will unveil Singh’s economic plans when he presents the budget in the first week of July.

The Reserve Bank of India cut its repurchase rate by 4.25 percentage points to 4.75% from 20 October to 21 April. It also lowered the reverse repurchase rate to 3.25% to reduce the cost of lending and stimulate domestic demand.

The Sensex has risen 26% since the 16 May re-election of Singh’s Congress party-led United Progressive Alliance, on optimism that higher government spending will boost company profits. The $1.2 trillion economy stabilized in the three months to March, maintaining the 5.8% pace of expansion recorded in the preceding three months.

The central bank expects the economy to grow 6% in the fiscal year that started 1 April, the slowest pace of expansion since 2003. Annual growth averaged 8.5% in the previous five years.

Production rebounded in April as manufacturing, accounting for about 80% of the total output, grew 0.7% from a year earlier after a decline of 1.6% in the previous month, Friday’s report showed. Mining climbed 3.8% and electricity rose 7.1%, accelerating from March.