Monsoon model set to shift from statistics to simulation

Monsoon model set to shift from statistics to simulation

New Delhi: The Indian weather office will change its monsoon forecasting method yet again as it tries to call correctly the naturally occurring phenomenon with the greatest impact on economic growth.

The India Meteorological Department (IMD) failed to predict droughts that hit the country in three years this decade, putting growth under pressure and causing inflation to rise.

The new monsoon forecast model, likely to be in place by 2015 after work begins on it by the end of the year, is expected to do away with the current practice of monsoon forecasting based on statistical models. Instead, it will simulate meteorological conditions such as wind speeds and ocean temperatures to forecast rainfall.

The effort will be to improve a model developed by the US National Oceanic and Atmospheric Administration, or NOAA.

Officials in the ministry of earth sciences said NOAA will provide this model, currently referred to as “NCEP-CFS" (National Centre for Environmental Planning-Coupled Forecast Model) to Pune-based Indian Institute of Tropical Meteorology (IITM). 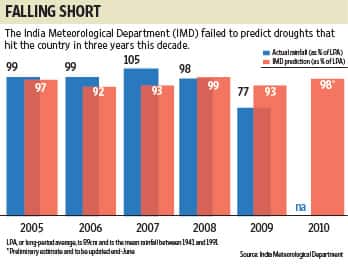 NCEP-CFS will be what meteorologists call a dynamical atmospheric-ocean coupled model. In this approach, a spectrum of meteorological data from wind speeds and sea surface temperatures is used to simulate the weather. Along with the numbers, equations that govern the relationship between these data are fed to supercomputers that crunch and extrapolate the forecast over required time frames.

Using such an approach to predicting climate means scientists don’t need to depend on tenuous historical data or statistical relationships between atmosphere phenomena, such as snowfall over Europe, and historical trends in monsoon rainfall.

Statistical models are generally acknowledged to be unreliable by weather scientists as correlationships between variables could randomly fail any year. Yet, the IMD still relies on them as no dynamical model, Indian or foreign, can forecast Indian monsoon beyond a week.

“The five-year challenge is to be able to go from a week to four monsoon months," said Madhavan Rajeevan, an Indian Space Research Organisation scientist and one of the experts who will be involved in the exercise.

IMD has been forced to take a relook at its forecasting approach after it failed to predict serious droughts in 2002, 2004 and 2009. It has changed its forecasting models twice in the last eight years, after relying on them since 1988. Its inability to shift to a modern, dynamical approach has been hampered by a lack of personnel, funds and access to supercomputers.

“That’s the issue we are addressing. The European Met (meteorological) office has 300 people working on a single model. We have less than 50. So this entire task of creating better models is part of the project of ‘monsoon mission’," said Nayak.

“Monsoon mission", he added, was at a preliminary stage and was yet to garner government funds. “However, this will be the largest weather-related research initiative in the country," he said.

Dynamical models used by Indian research organizations are based on those developed by the UK meteorological office’s Hadley Centre, the International Research Institute for Climate Prediction, the US-based Center for Ocean-Land-Atmosphere Studies and the European Centre for Medium-Range Weather Forecasts.

Though some of these models have been tweaked by Indian research organizations, including IITM, the Centre for Development of Advanced Computing, the National Aerospace Laboratories, the Centre for Mathematical Modelling and Computer Simulation, and IMD’s own National Centre for Medium Range Weather Forecasting, the Indian Institute of Science, Indian Institute of Technology, Delhi, and the Space Application Centre, they too failed to predict the droughts.

Being able to predict droughts and warn the government continues to be of vital interest to India’s policymakers.

Last year, a 23% deficit in rainfall compared with the 50-year average that is considered normal and water reservoirs being filled to only 60% of their capacity, nearly 10% less than the decade’s average, indirectly contributed to double-digit food price inflation.

Though agriculture contributes only 17% to India’s gross domestic product, at least 60% of India’s workforce depends on farming, which is mostly rainfed.

Experts, in general, welcome government’s concerted approach. “Actually, IMD has no other choice," said D.R. Sikka, former director, Indian Institute of Tropical Meteorology. “Empirical approaches to monsoon aren’t useful at all. But there is a chance that dynamical models remain unsuccessful with capturing Indian monsoon. We can’t rule that out."