Mumbai: A significant number of corporate and individual taxpayers in Mumbai have received a jolt from the income-tax (I-T) department because a technical fault in its computer system caused an error in matching tax deduction at source (TDS) with the returns they filed. 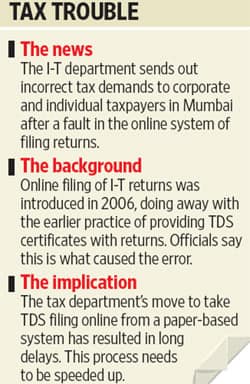 “TDS information on about 80% of taxpayers in the corporate and business segment and 30% in the salaried section have not tallied due to (a) fault in the system," said one I-T official, adding that they had been sent tax notices.

The precise number of such cases was not known. According to official data, 1.79 million taxpayers in Mumbai, India’s financial capital, filed TDS returns for the last fiscal year. Direct tax payments from Mumbai account for around 35% of national direct tax collection.

“In most of the cases, the incorrect tax demand notice has been issued due to mismatch of information on TDS available with the department and the return filed by the taxpayer," said a second official at the I-T department.

Both officials did not want to be named because they are not spokespersons for the department.

“We are aware of the problem relating to non-credit of TDS and demand raised as a consequence," Shishir Jha, commissioner and spokesman for the Central Board of Direct Taxes, or CBDT, said in an email response to queries.

“It is true that many taxpayers have been issued with tax demand notices. The advice to such taxpayers is to write to their assessing officers enclosing (a) copy of TDS certificate, so that he can give credit for the taxes deducted and vacate the demand," Jha said.

“In case the problem still persists, they may contact the additional commissioner in charge of the range or the concerned commissioner of income tax," he said.

According to officials, the mismatch of information was mainly caused by the lack of an individual transaction identification number and technical faults in the online TDS return filing process.

“Earlier, when TDS was filed on paper, we were able to process the claim within four-six months, but now, with the new rule (requiring online filing of returns), it is taking much longer," said the second income-tax official.

Before the online TDS process was introduced in April 2006, the department would verify TDS certificates submitted along with the income-tax return for discrepancies. “Now, if the taxpayer commits a simple error while filing TDS returns, there is a mismatch of information and we cannot verify it because they don’t have to submit TDS certificates," he said.

However, Jha said CBDT had simplified the procedure by dispensing with the requirement to annex any TDS certificate or file it along with the income-tax returns.

“However, the provision and obligation for deductors to issue TDS certificate to the deductee still very much exists. This has been deliberately done to avoid much inconvenience to taxpayers," Jha said.

Online TDS returns are filed only with an e-TDS intermediary such as National Securities Depository Ltd or through authorized agents.

TDS is an important part of income-tax collection because it is based on the concept of “pay as you earn". For fiscal 2009, the Union government collected Rs1.33 trillion through the TDS route.

According to official figures, net direct tax collections for the April-July period were Rs73,990 crore, up from Rs71,648 crore in the same period last fiscal.