Thanks for Visiting Mint
You seem to have an Ad Blocker on. Please turn it off in order to continue, or whitelist Mint
HOW TO TURN OFF AD BLOCKER
OR
REFRESH IF YOU ALREADY TURNED OFF THE AD BLOCKER
Home >Home Page >GE&#8217;s Bangalore centre designing cutting-edge aircraft engine

Bangalore: In six years, Bansidhar Phansalkar has to be ready with an environment-friendly engine for passenger planes that is radical in design, more easily maintained and more fuel-efficient than existing engines. 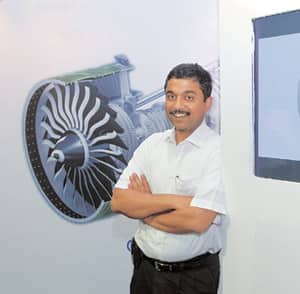 The specialists work on analytics, using the high-performing computing environment—among the top 10 in Asia—to eliminate problems such as noise and friction and improve efficiency before cutting the metal to make the engine.

“One of the biggest costs for all operators is fuel, and it makes sense for us to focus on fuel-efficient engines. That is what our customers are telling us," says Phansalkar, general manager (India engineering operations) at GE.

Plane makers such as Airbus SaS and US space agency National Aeronautics and Space Administration, or Nasa, have shown keen interest in the new engine concept, he says.

When the new engine is ready for commercialization, which GE is targeting in six years, it would be the first one to give fuel efficiency as high as 30% over existing plane engines, justifying GE’s decision to open its largest non-US research and development unit in India to lower the cost of new technology introduction in its core areas of engines and power plants, locomotives and healthcare.

Fairfield, Connecticut-based GE does research only on commercial aircraft engines in India, and not military programmes.

GE had flown a plane with a technology demonstrator of the open rotor engine from the US to the UK in the 1980s, but the concept did not take off because the engine produced unacceptably high noise levels.

“If it is sorted out, there will be a very strong case to go for that (engine)," says Phansalkar.

But this is for the long term.

For the global engine market, design is a closely held technology, dominated by companies such as GE, Rolls Royce Group Plc and Snecma group, and a new design could cost billions of dollars and take a decade to reach the actual user—the aircraft makers. Work in progress: The John F Welch Technology Centre at the General Electric campus in Bangalore. The centre has a target of building a new kind of environment-friendly, fuel-efficient plane engine in six years. Hemant Mishra/Mint

“We maybe need four new product introductions in the next five or six years. So, to prepare the core technology, to get some modules certified, even full engines certified, is really what our challenge is right now," he says.

Phansalkar, whose team has worked on the LeapX plane engine to be launched by 2015 for Airbus A-320 planes and the Boeing 737, says the Indian aviation team’s contribution would be roughly 10 times the $30 million cost incurred on staff and facility.

Analysts say the setting up of a research centre in India by a firm such as GE helps bring back Indians who have moved abroad for work, and in a small way, aids research in scientific institutions.

“Of course, the brain drain has decreased. Some amount of research happens, but the trickle down (of research activity) is not vast. The challenge is to get them working on cutting edge technology with us," says B. Dattaguru, former chairman of aerospace engineering at the Indian Institute of Science, Bangalore.

Mano Manoharan, who moved from the US early this year to head the John F Welch Technology Centre’s operations, says that the centre is making an effort to collaborate with research schools in the country.

GE is working jointly with the department of science and technology and universities in Andhra Pradesh and Kochi in Kerala on solar power generation.

“It is a small start. We will identify more projects," says Manoharan, who calls the research lab an “industrial research organization" that works on products to help make people’s lives better.

It has worked on low-cost ultrasound healthcare products, a locomotive for the Indian Railways and water-purifying technology, among others.

The centre currently employs one in six researchers in GE and by 2010, India will have one in four of its researchers globally.