New Delhi: A panel formed by the apex body of accountants to study the fallout of the scam at Satyam Computer Services Ltd has suggested the formation of a separate regulatory framework to oversee foreign entities providing a range of management consultancy, auditing and other services to Indian clients.

The recommendation is contained in a report the committee submitted on 4 February to the central council of the Institute of Chartered Accountants of India, or Icai, which regulates Indian auditors and accountants. The high-powered panel was headed by former Icai president Uttam Prakash Agarwal.

A copy of the report has been reviewed by Mint.

“The council may consider recommending to the government to bring all entities that are providing a range of management consultancy and other services in competition with members of the institute under a regulatory mechanism," said the report. 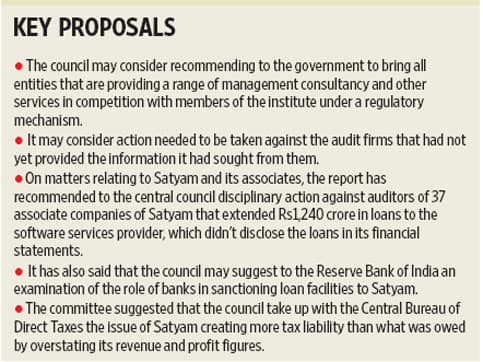 Hyderabad-based Satyam has been at the centre of India’s biggest corporate fraud inquiry after founder B. Ramalinga Raju confessed in January 2009 to having misstated accounts to the tune of Rs7,136 crore over a period of several years. The government asked Icai, one of several agencies investigating the fraud, to look into auditing lapses at Satyam.

Satyam auditor Price Waterhouse Bangalore, an Indian partner of PricewaterhouseCoopers Llp, one of the world’s big four auditing firms, also came under scrutiny following the scam, with two partners arrested in connection with the fraud.

The Icai committee, in its recommendations, said the council may consider action needed to be taken against the audit firms that had not yet provided the information it had sought from them.

According to the report, information has been sought from 94 accounting firms which were perceived to have affiliations with international entities on their tie-ups.

The committee said firms having affiliations with Deloitte Touche Tohmatsu, KPMG, Ernst and Young Ltd (E&Y) and PricewaterhouseCoopers had tried to maintain confidentiality while replying to Icai and not backed up their responses with documents.

All Deloitte affiliates sent similar letters to the institute, saying they had networked with Deloitte Haskins and Sells, which is registered with the Icai, and that they did not see any link between the formation of the high-powered committee and documents asked for, the report said.

Six BSR and Co. firms said they had an agreement with KPMG, but details of their partnership had to be kept confidential.

“They have mentioned that normal remittances have been made to KPMG, but have declined to reveal details thereof," the report said.

Two SR Batliboi and Co. firms failed to send copies of agreement/contract with E&Y; they also didn’t mention details of remittances made by them to their foreign affiliate, it said.

Seven Price Waterhouse firms wrote to the institute stating that they would like to make a presentation rather than sharing certain crucial information, it said. Two firms of Lovelock and Lewes responded to the institute on the same lines.

The committee concluded that affiliate firms don’t have uniform resources and it was evident that some firms with lesser resources had to rely on other firms to fulfil their professional commitments.

The council may consider “appropriate action" needed to be taken so that the firms that had not supplied the information sought by the committee ensure there is no violation of the code of ethics prescribed for Icai members.

Some executives at the big four accounting firms, however, see the report as Icai’s bid to discredit them because the institute is governed by small CA firms.

“Rather than talking about what should be the profession’s focus post Satyam, such as rotation of partners or firms, joint audits etc, the institute is slandering large auditing firms," said a senior executive at one of the four firms, who did not want to be identified.

“We have passed on information relevant to the institute but, of course, we have to maintain certain confidentiality on commercially sensitive information like our partnership agreements, tax returns etc as we don’t want all information to become public," said this person.

Icai is trying to be a regulator and a competitor, which is not justified, the person added. He also said all the affiliates of international firms are registered with Icai and the institute had given them permission to practice as audit firms.

He also said supporting documents were not given as they contain confidential information on revenue sharing.

Currently, an auditing company can operate with a maximum of 20 partners and to have deeper penetration the big accounting firms have tie-ups with their different associates.

A partner at Deloitte, who did not want to be identified given the sensitivity of the matter, said he was surprised that Deloitte firms were being labelled as surrogate audit firms in the report when all their partners are qualified members of Icai, holding valid certificates of practice and thus see themselves as 100% Indian firms.

An Icai sub-committee, headed by Kolkata-based CA Subodh Agrawal, is expected to study the report and finalize its recommendations by April-end, after which the report will be presented to the government.

“We had a brainstorming session when the council met on 13 March and several suggestions were made. The committee may seek more information from various auditing firms including the big four. It will then finalize the report of the high-powered committee and present it to the government somewhere in May," said Amarjit Chopra, Icai president.

This will be the second report prepared by Icai on issues relating to Satyam.

The first one submitted in August to the ministry of corporate affairs did not find favour with the government.

Mint had reported on 21 October that Icai’s investigation of the role of the auditors in the fraud at Satyam didn’t shed any new light on the subject. It only repeated charges made by the Central Bureau of Investigation, India’s federal investigative agency, besides suggesting generic measures to improve the audit process.

“A lot of suggestions were made by the government nominee Prithvi Haldea on various issues relating to better corporate governance of auditing firms and the committee will take up all that," said a person familiar with the move who did not want to be identified.

Haldea is chairman and managing director of Prime Database, a New Delhi-based primary market tracker, who advises the government on corporate governance issues. He declined to comment on the matter.

On matters relating to Satyam and its associates, the second report has recommended to the central council disciplinary action against auditors of 37 associate companies of Satyam that extended Rs1,240 crore in loans to the software services provider, which didn’t disclose the loans in its financial statements.

It has also said that the council may suggest to the Reserve Bank of India an examination of the role of banks in sanctioning loan facilities to Satyam.

The committee suggested that the council take up with the Central Bureau of Direct Taxes the issue of Satyam creating more tax liability than what was owed by overstating its revenue and profit figures.

The big four accounting firms declined to comment for this story.