New Delhi: Whenever Renu Puniya visits her village, in the Bulandshahr district of Uttar Pradesh, the inevitable question is put to her: So where are you working now? “I’m in the force," Puniya says. “Which force?" she is asked. “They expect me to say the police or the army," Puniya says, laughing. “But I say: G4S."

For three years now, Puniya has been one of G4S India’s 5,000-odd female private security guards, hired out to clients six days a week to wield hand-held metal detectors, search handbags, or respectfully frisk female guests. It isn’t yet the most orthodox of professions for women in India—but it has become one of the most promising.

Over the last year, as terror attacks spread like a rash across India, culminating in the November horror of Mumbai, hotels, malls and cinemas have pumped up the demand for female security personnel. Earlier content with just a posse or two male guards lounging near entrances and watching for troublemakers, these establishments suddenly found themselves having to screen every single visitor. 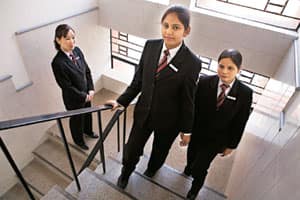 This has posed interesting hiring dilemmas for security agencies. Their male guards have traditionally been drawn from the police or the army, or from other security-related jobs.

“I’ve met some girls who were involved in the National Cadet Corps in school," says Rehana Qureshi, regional marketing director of G4S. “But otherwise, there are many girls with diverse backgrounds, who’ve worked as salesgirls in department stores or in beauty parlours, or something like that."

Muskaan Rana, who joined Jupiter Administrative and Security Services five months ago, is one such maverick. Rana, 23, worked in a cosmetics store as a salesgirl, until she heard of the demand for female guards, and the high salaries they were earning.

“The offer was so tempting, in fact, that I left my part-time studies as well to take up a full-time job here," Rana says. Jupiter was so besieged with requests for female guards, in fact, that it could even accommodate Rana’s only stipulation: “That they station me closer to my home, compared to my earlier job."

Puniya, 19, had worked for six months in customer care at a telecom firm before joining G4S. “When I was young, I’d always wanted to join the Border Security Force," she says. When she saw a vacancy at G4S, she applied and went through a written test, an interview, a medical exam and one month of training.

Her colleague Poonam Joshi’s sternest test, however, probably lay in convincing her family about her choice of career. “I’d wanted to join the Delhi Police, but my father had heard that I would have to leave town for six months for training, and he was firmly against that," Joshi, 25, and the mother of a seven-year-old boy, says. “After that, when I said I wanted to join G4S, my father was finally persuaded that if my heart lay in this field, this should be the way to go about it."

Joshi and Puniya are both Delhi girls; Qureshi, however, points out that while male guards come from all over the country, their female counterparts usually live and work in the city where they grew up. The exceptions, such as Neetu Guru originally of Dehradun, tend to be backed strongly by their family; Guru’s father and brother, for instance, are both in the army.

The mechanics of demand and supply have also engineered a pay scale that reverses the usual gender-based discrepancies. “We pay a male guard Rs6,500-7,000 per month for 12-hour shifts, but we pay a female guard Rs8,000-10,000 for the same 12-hour shifts," says Surendra Singh, one of the founders of Jupiter Administrative and Security Services. “Efficient lady guards are simply more difficult to find."

In the current, watchful climate, G4S has expanded its army of female guards by 25%, Qureshi says. In fact, the security industry as a whole also seems to have hit a stride that appears recession-proof. G4S, after a 35% increase overall in its security personnel, now has 130,000 guards employed across India. Premier Shield hired 10% more guards this year than last year, while Jupiter hired 30% more.

One entrepreneur, Rajeev Dar, whose Indian Society of Agribusiness Professionals focuses on skills training in rural areas, is soon planning to include security training in his portfolio of skills. “We need to get our students jobs, so we’re looking for areas that are downturn-proof," he says. “Security is one of them, where the demand is very high."

Once hired, security guards train at their agency’s facilities, for anywhere between two weeks and a month. “We look for security consciousness, alertness, and some basic education when we first hire them," Qureshi says. “Then our training puts them through behavioural aspects, first-aid, fitness regimens, responding to threats, evacuation methods, and so on."

On occasion, unfortunately, there need to be hasty updates in routines. “The day after the New Delhi bombings last year, we were told to become thorough in our bag searches, whereas it was probably more cursory earlier," Puniya says. “And when customers invariably got irritated with our searches, we had to keep a smiling face and politely point out that it was for their own safety."

But asked to recollect the most exciting, action-packed day of her three-year career thus far, and Puniya thinks and then shakes her head. “I don’t think there has been such a day at all," she says. “And in a way, I’m glad about that."

Sidin Vadukut and Aruna Viswanatha contributed to this story.