Calling for a more empirical debate on the Aadhaar experience

Aadhaar affects every Indian. Its scale, ability to uniquely identify individuals, and digital interface is what makes it compelling. But these same features raise questions about privacy, data security, and exclusion of vulnerable populations.

However, the discourse on Aadhaar today is fractious and polarized. Those challenging Aadhaar contend that it is a tool for surveillance and disempowerment of the poor and call for jettisoning the project. Many in the government posit that Aadhaar empowers the poor, saves money for the exchequer, and increases state capacity. Their resulting policy prescription is to aggressively scale the use of Aadhaar across sectors.

What is missing from this debate is rigorous, independent, data representative of the populations that regularly interact with Aadhaar. This is the void that our organization, IDinsight, set out to fill in the State of Aadhaar Report 2017-18. 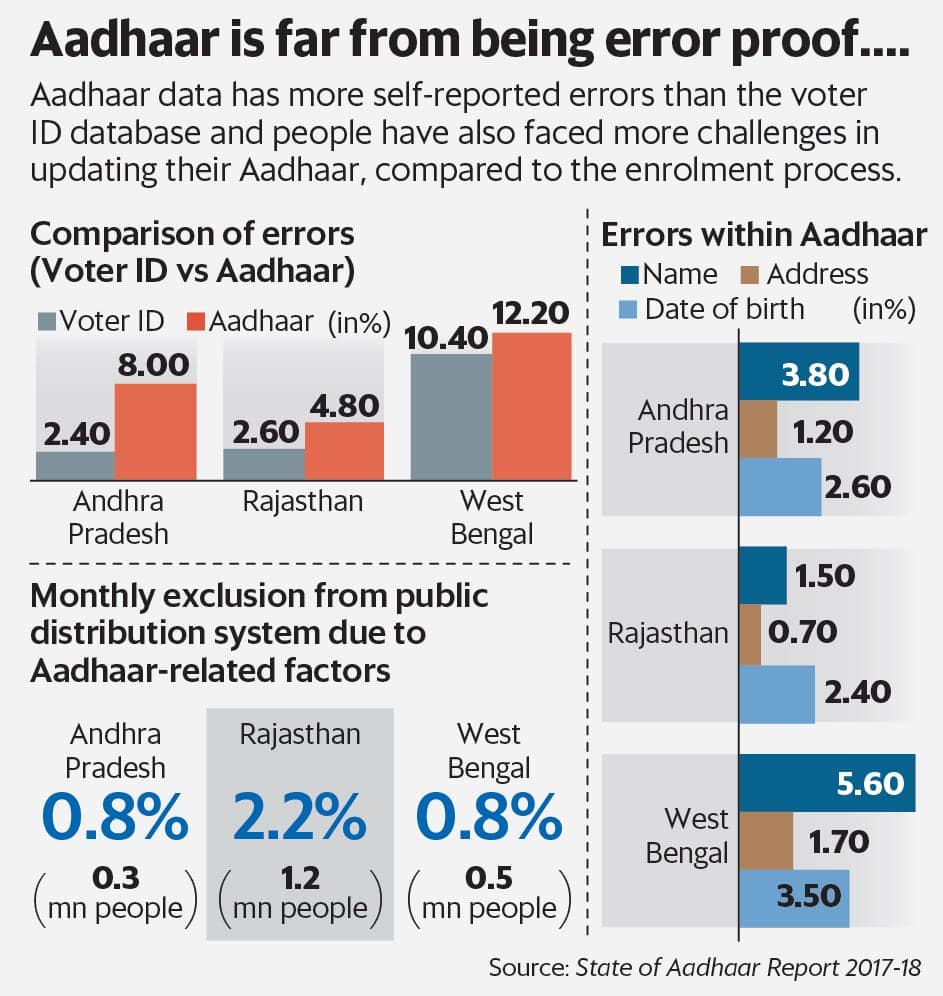 We conducted the largest survey on Aadhaar to date, which is statistically representative of the rural populations of Andhra Pradesh, Rajasthan, and West Bengal. Given these states’ diversity in language, state capacity, socioeconomic development, and adoption of Aadhaar, our survey also gives an indicative view of the Aadhaar experience across all of rural India. In travelling to 21 districts and conducting in-depth interviews with nearly 3,000 households, we learned directly from citizens about their experiences and perceptions of Aadhaar.

Our findings surprised us.

We found that Aadhaar-related exclusion from PDS is significant, but governance factors not related to Aadhaar are responsible for more exclusion. Further, over half of respondents prefer Aadhaar-based PDS delivery, as they perceive biometric authentication prevents identity fraud. This dramatically contradicts the prevalent narrative today that upholds Aadhaar as the main reason for denial of the rightful benefits of the poor. Having said that, the Aadhaar-related exclusion that exists is still significant and needs to be eliminated. In Rajasthan, about 2.2% of PDS beneficiaries (roughly 1.2 million individuals statewide) are excluded monthly due to Aadhaar-related factors, compared to 6.5% of beneficiaries excluded due to non-Aadhaar factors (such as non-availability of ration).

Equally surprising was how Aadhaar was perceived on the ground. Over 96% of respondents we surveyed said that it is important for them to know what the government does with their Aadhaar data. This is consistent with other recent research that Indians of all backgrounds, and not just the educated elite, indeed value privacy.

At the same time, 87% of respondents in our survey also approved of the government’s decision to mandatorily link Aadhaar to public services. Given that mandatory linking is often raised as a potential privacy risk, it was striking that most approved of it even while expressing that they value privacy.

We also find that self-reported errors in demographic data (name, address) in Aadhaar is 8.8% versus just 5.7% in voter IDs, pointing to the need to improve data quality in the Aadhaar database.

This is only a glimpse of some of the findings in the report. We explore a wide range of other issues such as enrolment and update processes, the analog versus digital use of Aadhaar, its role in facilitating rural banking, and more.

Our findings suggest that the truth about Aadhaar on the ground does not lend itself to a simple “good" or “bad" verdict. The truth is more nuanced. That may make for a less enticing story, but it reveals the complexity of the ecosystem, and the importance of engaging with accurate and transparent numbers.

We invite a vigorous debate on our findings and their policy implications. We hope this debate advances more data-driven discourse and decision-making around Aadhaar. For a project as consequential as Aadhaar, affecting over a billion Indians, no other approach will do.

Ronald Abraham, Elizabeth Bennett, and Neil Buddy Shah are with IDinsight and co-authors of the State of Aadhaar Report 2017-18.