Earth&#8217;s fate in the balance at climate meet

Earth’s fate in the balance at climate meet

New Delhi: The earth will take centre stage for the next two weeks as top government officials, including US President Barack Obama and India’s Prime Minister Manmohan Singh, gather in the Danish capital, Copenhagen, to try and arrive at a consensus on the measures that need to be taken to protect the environment. 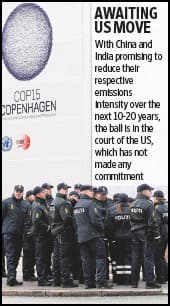 The world remains divided on what would constitute an effective and equitable environmental treaty. The divergence of views and the various stances that governments have adopted will ensure that their representatives will sweat over every word and punctuation mark of any accord, which may still fall short of what’s needed.

While a “very important agreement" would be reached, Jean-Pascal van Ypersele, vice-chair of the Intergovernmental Panel on Climate Change (IPCC), warned that “this deal will be insufficient". He did concede, however, that more top-level politicians would attend Copenhagen than the previous talks in Kyoto in 1997.

Science has warned of the need to halt climate change and prevent global warming to avert catastrophe. Developing nations say the rich are the worst polluters and that they need to clean up their act, having grown wealthy from centuries of industrial expansion. The developed world says emerging economies should also do their bit to make sure that the earth doesn’t suffer degradation.

Just days before the conference, some countries, such as India and China, have put offers on the tables that could possibly help frame a final deal. The burst of public engagements, meetings and conferences in the run-up to the summit also managed to persuade heads of state and government from key countries to attend the conference.

But it may not be enough. While hopes for a deal have been rekindled with the promises and the declarations leading up to Copenhagen, it’s not certain that a globally acceptable agreement can be reached.

The US, which is not a signatory to the Kyoto Protocol, the existing climate change agreement, is still far from the deep and ambitious emission cut commitments that science and developing countries have demanded.

The US has demanded that the Kyoto Protocol be buried and a new agreement, which would constitute a mere “pledge and review" without compliance mechanism or a penalty clause, be pursued. This has come as China, India, Brazil and Indonesia recently made their domestic emission reduction pledges.

A Harvard University policy paper warns: “A bottom-up pledge and review program with voluntary commitments and no formal compliance mechanism may not deliver sufficient emissions mitigation over time. The fundamental challenge in addressing climate change is in overcoming the interest for countries to free ride on the efforts of others in providing a global public good, and voluntary pledges may not be much different from a world with no multilateral framework and only unilateral actions."

The lowest expectation from the conference revolves around a possible political statement, which might set the ground for further negotiations though the Copenhagen conference itself was supposed to be the deadline for an agreement at the Bali climate talks in 2007. Indian negotiators believe the ground for the political agreement is slippery and the country should be wary.

A deal based on equity is a demand from developing nations but the argument that every individual on the planet has an equal right to carbon space is all but ignored. At present, per capita emissions in the world vary widely—between 20 tonnes in the US and 1.2 tonnes in India.

While the world’s 17 largest economies, including India, have pledged to restrict the rise of global average temperature to 2 degrees Celsius, the degree of burden sharing vis-à-vis emission cut requirements has not been thrashed out. Developing countries have held that any mitigation action from their side should be compensated financially and technologically while developed countries demand that emerging economies such as India and China should commit to mitigation action without support.

The latest Danish proposal, which has been vociferously objected to by India, China, South Africa and Brazil, attempts to erase the boundary between poor and rich nations, the basis of which exists in the UN framework convention and the protocol. Moreover, the proposal also asks emerging economies to contribute to a fund, which will help least developing nations mitigate and adapt to climate change. The Danish proposal is supported by European countries and the US.

With China and India promising to reduce their respective emissions intensity over the next 10-20 years, the ball is in the court of the US, which has not made any commitment. While heads of state meet over a formal dinner and address the world on their commitment to the health of the planet, future generations will judge them on whether they really meant what they said.