New Delhi: Maruti Suzuki India Ltd, the country’s largest car maker reported a 18.3% decline in net profit in the quarter ended 31 March over the corresponding quarter of 2008 after it was forced to offer discounts to push sales in a sluggish market and the Indian rupee depreciated more against the dollar than the company anticipated. 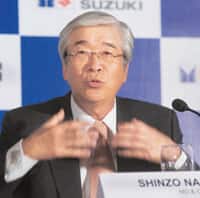 Being optimistic: Maruti Suzuki’s CEO Shinzo Nakanishi said the benefits from falling commodity prices will come only in the first quarter of 2010. He was announcing the firm’s annual results in New Delhi on Friday. Ramesh Pathania / Mint

Meanwhile, the company fared slightly better than analyst expectations in terms of net revenue for the year. This rose 13.4% to Rs20,852.5 crore compared with Rs20,546.7 crore forecast by analysts.

“(If we) exclude the impact of forex losses the results are in line. There was a disappointment on the (profit) margin front but going forward they’re likely to improve," said Piyush Parag, an analyst at Religare Capital Markets Ltd.

The rupee depreciated 30.7% against the dollar in the year to 31 March and 6% in the three months ended 31 March.

Also See On the Skids (Graphic)

Only one-third of Maruti’s foreign exchange requirement is hedged. Going forward, Maruti “might take calibrated calls to hedge the currencies involved," Seth said in a call with analysts. In an effort to reduce its dependence on foreign currencies Maruti said it would increase its focus on localization or local parts.

Currently, imports amount to 12% of the company’s net revenue. And vendors import the equivalent of another 10% of net revenue.

Bouyed by rising sales in the last quarter auto stocks have been on a tear. Maruti sold 211,485 cars last quarter, 13% more than in the same period a year before. Its stock has risen 54% so far this year while the 14-share Bombay Stock Exchange (BSE) Auto Index has gained 42%.

But as Maruti’s results show these the increase in sales came at a high cost. “The 4th quarter saw some recovery in market sentiment helped by high sales expenditure on the company’s side," said Shinzo Nakanishi, chief executive officer at Maruti.

The company spent Rs62 crore more on discounts last quarter than the same period the year before.

Discounts have been “reduced quite a lot in April", according to Mayank Pareek, managing executive officer, sales and marketing at Maruti. He, however, hinted that the company may have to reinstate them depending on market conditions and its competitors’ strategy. Maruti plans to launch a new model, the Ritz next month.

While Pareek declined to elaborate on how the current fiscal would shape up, Maruti does plan to push ahead with a Rs1,800 crore capital expenditure to boost its research and development and marketing activities and on the maintenance of its plants in Gurgaon and Manesar. Maruti added 270 research staff this year to the 460 already on its rolls.

Apart from foreign exchange losses, increasing raw material and component costs also played a significant role in contributing to the depressed numbers. For the full year, these costs rose 15% to Rs15,235.7 crore. The firm said it had not yet benefited from the fall in commodity prices as long-term contracts result in benefits only after some time.

“The vast part of this benefit will come in the first quarter of 2010," Nakanishi said in a conference call with analysts.

Exports have been a bright spot for the company. Its A-Star model launched last November helped the company record a 32% rise in exports to 70,022 units in the year to 31 March as compared to the year before. Maruti expects to export 50,000 units of the A-Star to Europe by November and receive a contract manufacturing order from Nissan Motor Co. Ltd.