Thanks for Visiting Mint
You seem to have an Ad Blocker on. Please turn it off in order to continue, or whitelist Mint
HOW TO TURN OFF AD BLOCKER
OR
REFRESH IF YOU ALREADY TURNED OFF THE AD BLOCKER
Home >Home Page >Air India goes radical to survive

New Delhi: India’s struggling flag carrier, Air India, has put in place a determined turnaround plan, the initial focus of which will be on survival and return it to profits in three years. 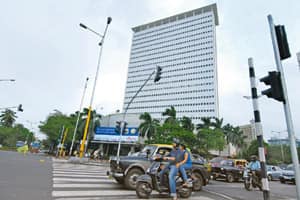 Alongside, it will also attempt a rationalisation of its work force, chairman and managing director Arvind Jadhav said on Friday, without elaborating.

Air India has accumulated losses of Rs7,200 crore and is saddled with debt of Rs15,241 crore, taken to pay for 49 of the 111 planes, worth Rs50,000 crore, it has ordered from Airbus SAS and Boeing Co. It now plans to cancel some of its aircraft orders.

“We’ve got into a cash-flow problem. We are unable to service our interest and debt liabilities with our internal resources," Jadhav, a 1978-batch officer of the Indian Administrative Services who took charge of the airline in May, said in his first public briefing.

Air India was forced to delay salaries in June and seek government aid to tide over the worst crisis in its over 70-year history. The airline must reorganize after the government asked it for a time-bound programme as part of conditions for the rescue package.

The king is dead; long live the king

Indian carriers had losses of around Rs9,740 crore in the fiscal year ended 31 March after oil prices spiked and passenger count fell. Many of these are finding it difficult to fund operations in the wake of the global crash crunch and some have missed payments to vendors, including the state-run oil marketers.

Nacil had asked for a loan and equity infusion of around Rs15,000 crore from the government. Its current equity capital is Rs145 crore.

The proposal is being vetted by the finance ministry, Jadhav said. The next meeting is on 25 August. Based on the outcome of this meeting, the airline will finalise its financial restructuring, though it has already set a three-year road map to recovery with milestones of nine, 18 and 36 months.

The first six months of this restructuring, Jadhav said, will be focused on filling up aircraft that are flying at half occupancy by making sure its on-time performance improves.

Over the next nine months, its cargo, engineering services, ground handling and airline operations will be carved out into separate divisions, making them individual revenue and profit centres to take away the burden from the main airline group. Air India plans to spin off non-core units after 18 months through an additional public offering.

Air India’s much delayed entry into Star Alliance, the world’s largest alliance of airlines, would have to wait until June 2010 and international route rationalisation and code-share agreements will be carried out keeping this in mind, Jadhav said. Code sharing refers to a ticket marketing practice among airlines that allows carriers to share the two characters in codes used in airline reservation systems. This helps customers purchase a single ticket on a journey that has two flights such as a New Delhi-London leg and a London-New York one on two different airlines. Air India will also return the leased aircraft.

The airline plans to relocate its 31,000 employees into its four new subsidiaries. “For the first time in Air India’s history, we are officially involving all employees representatives... We have set up a turnaround committee. Fifty percent of committee members are union representatives," said Jadhav.

“Well, if the people in Air India and those who have to support them within the ministry really want these things to be done, these would certainly be done," said Vasudevan Thulasidas, who presided over the merger of the Air India and Indian Airlines between 2007 and 2008.

It will try to reduce its cost per average seat kilometre, an aviation benchmark to calculate costs, to 6.5-7 cents (Rs3.11-3.35), in line with what Jadhav said was the international benchmark. “We are not going to sit back and watch."