Bangalore: Largely known in India for the supercomputer that the country was denied by the US government in the late 1980s—a move that kick-started India’s own supercomputing programme—Cray Inc. is now trying to shed its “pricey" image here as it foresees exponential growth in the high performance computing market. The supercomputer maker says that buyers in the country are looking seriously at a minimum of three petaflop computers, ones that crunch a thousand trillion calculations per second. 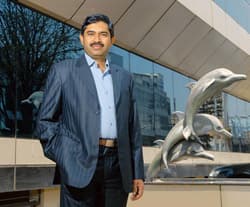 However, with its next generation interconnect technology, code-named Gemini, to hit the market in the next few weeks, about the same time that its chip partner Advanced Micro Devices Inc. (AMD) is planning to launch the world’s first 8- and 12-core processors, Cray hopes to capture a wider user-base in India. So far, AMD’s 6-core Opteron processor is the leading processor in supercomputing, according to the Top500 list, a listing of supercomputers on the basis of processing speed.

Interconnects are highly specialized network interfaces that allow a large number of processors to work together. Most high performance computing vendors use off-the-shelf interconnects, Cray makes its own.

“Even though we have been present in India for long, having installed machines ranging from $100,000 to $4 million, we were not forceful (in the market). Now we are going to be; we are giving up our pricey tag and becoming more affordable," says Sudhakar Yerneni, country manager, Cray Supercomputers (India) Pvt. Ltd.

Yerneni’s confidence comes partly from the fact that Cray is the only company in the world focused exclusively on supercomputers, investing one-third of its revenue on research and development and, by extension, better poised to innovate. In 2009, when some of its rivals such as Sun Microsystems Inc. and Silicon Graphics International were sold (and bought), and the global market saw a decline in sales, Cray was still profitable, says Yerneni. Besides, Cray machines are the only ones that can run so-called grand challenge problems (such as weather forecasting, climate modelling, or drug discovery that need thousands of processing elements) as well as smaller problems on the same machine.

Still, even though Cray has moved from the traditional brute-force hardware to sleeker machines, providing teraflop (a trillion calculations per second) computers that can slide under a desk, it’s cluster providers such as Hewlett-Packard, IBM, and Dell that currently rule the market in India. A cluster is a bunch of low-powered computers hooked in parallel to enhance computing capability and is catching with customers who don’t have budgets for supercomputers.

The current momentum (towards supercomputing) in education, research and government establishments is poised to pick up more steam and expand to other segments such as manufacturing and financial services, says Subram Natarajan, executive information technology consultant, systems and technology group, IBM India and South Asia. “A petaflop computing system in India would perhaps happen sooner."

It’s also a market that has, of late, seen computer makers signing up with application providers to expand their reach. Computational Research Laboratories Ltd (CRL), a wholly owned subsidiary of Tata Sons Ltd, rents out computing cycles (or roughly, time on the supercomputer) and its experience doing this shows that that non-traditional sectors too are ready for and need high performance computing solutions.

In December, CRL signed a multi-million dollar deal with India’s first and only Force India Formula One Team Ltd to offer a computational fluid dynamics solution to help it design the next generation race cars as well as enhance the aerodynamic efficiency of existing models.

“Our revenue has grown several-fold in the last one year," says Vipin Chaudhary, chief executive of CRL who assumed office three weeks ago. With aircraft manufacturers Piaggio Aero Industries SpA and Boeing among its customers Chaudhary, an industry-academia veteran whose last assignment was at The State University of New York in Buffalo, says the idea of desktop supercomputing is finally catching on.

Five years ago, there were no teraflop machines in India; today there are at least 30-40 multi-teraflop computers. “In the next five years there will be at least a 1,000 teraflop machines," says Yerneni. With Cray machines installed at places such as Saha Institute of Nuclear Physics in Kolkata, Tata Institute of Fundamental Research in Mumbai, and National Centre for Medium Range Weather Forecast in New Delhi, the company is fiercely competing with others for big and small deals.

“I don’t agree," retorts Chaudhary. For Natarajan, the industry’s high performance computing imperative is evident: “As new business models develop and evolve, enterprises will pursue options to stay competitive in their respective fields."