Thanks for Visiting Mint
You seem to have an Ad Blocker on. Please turn it off in order to continue, or whitelist Mint
HOW TO TURN OFF AD BLOCKER
OR
REFRESH IF YOU ALREADY TURNED OFF THE AD BLOCKER
Home >Market >Stock-market-news >Limited investment options trigger a dividend bonanza

Mumbai: Publicly traded companies in India handed out the biggest dividends in at least 10 years during 2017-18 as investment opportunities to expand and grow dried up, a Mint analysis showed. 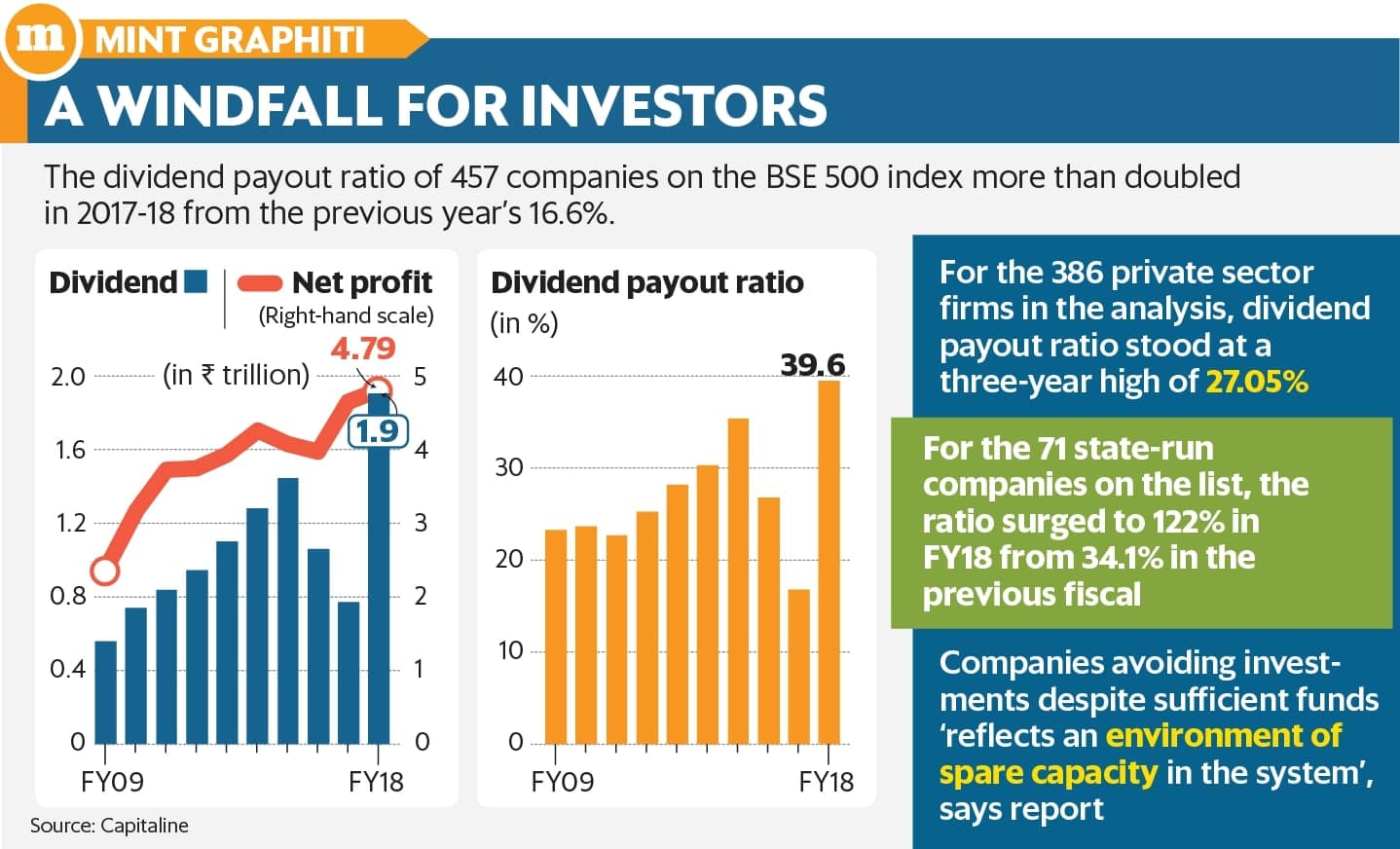 According to Vinod Karki, vice-president, strategy, at ICICI Securities Ltd, dividend payouts typically rise when cash piles up without corresponding investment opportunities. “Since capex recovery has not picked up in India, companies are piling on cash. Capacity utilization is still low. Return on capital is still not good for companies to generate spreads over their cost of capital. Both return on capital and return on equity of India Inc. have bottomed out in the past two-three years, but it is not yet that good for companies to get attracted to invest."

A 3 July ICICI Securities report by Karki and Siddharth Gupta said 3,500 listed non-financial Indian firms saw a rise in cash and cash equivalents to ₹ 15.1 trillion in FY18 from ₹ 14.7 trillion in FY17.

The report said companies avoiding investments despite sufficient funds “reflects an environment of spare capacity in the system (despite a rise, capacity utilisation for the third quarter of FY18 still stands at 74%) and inadequate return on operating assets (RoOA) from heavy capex sectors, such as infrastructure, in a rising ‘cost of capital’ environment. Incidentally, RoOA for industrial firms has also bottomed out and stands at 9.8% in FY18."

The higher payout ratios can be interpreted in two ways, said Deepak Jasani, head of retail research at HDFC Securities. “Either companies are too afraid to commit funds in a dynamic environment, where imports are freely made and their business models can get topsy-turvy anytime. The second reason is companies need relatively less capital to create more output, except for large capex-intensive sectors such as power, steel and logistics," said Jasani.

Analysis of Capitaline data showed that out of the total payouts, the ratio of 386 private sector companies stood at a three-year high of 27.05% in FY18, from 10.66% in FY17. For 71 state-run companies, the ratio surged to 122% in FY18 from 34.1% in the year-ago period. This is the highest dividend payout ratio by public sector enterprises in the last 10 years, despite 21 state-run banks not paying a single penny during the year.

“The percentages may be misleading, because if you exclude FMCG, PSU and IT companies, then the difference between FY18 and FY17 won’t be that big. Also, due to wide variations in profitability of PSU banks and oil and gas companies," said Jasani.

“FMCG companies (mainly MNCs) would typically want to distribute maximum by way of dividend to take out money from India, given that their cash flow requirement for growth is limited. For PSUs, the government has a compulsion about revenue resulting in high dividend payouts. Similarly, IT companies are giving away bigger percentage of their earnings as dividend or buybacks because they don’t have use of large surpluses generated year after year," he added.

According to Jasani, the payout ratio may seem to have grown faster for public sector units because, overall, their profits have shrunk due to losses incurred by state-owned banks.

However, analysts said the capex revival was focused around a few sectors and companies. ICICI Securities said that although there were signs of improvement in utilization levels (reflected in improving capex in certain sectors), overall capacity utilization levels are still low and “cash plus investments" will continue to rise. Therefore, the industry credit cycle is not expected to pick up in short term, it said.

The ICICI Securities analysis indicates that the balance sheet strengthening process of Indian firms is structurally positive for the long term, and lays the foundation for kick-starting the next leg of private capex cycle as demand picks up.