Hua Hin, Thailand: India said on Sunday that it is in discussions with China for a free trade agreement (FTA) to break down duty barriers to bilateral trade.

The statement by Prime Minister Manmohan Singh came a day after he and Chinese Premier Wen Jiabao met here and agreed not to let differences between the two countries to hurt bilateral cooperation. The two nations have had barbed exchanges recently over issues such as sovereignty over Arunachal Pradesh. 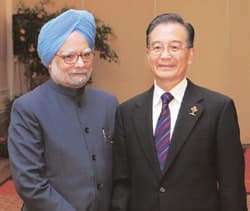 “We are in discussions with Japan, China, Thailand and Malaysia and other countries to conclude agreements of a similar nature," Singh said at the Fourth East Asia Summit here.

Faced with a huge trade imbalance in favour of China, Indian industry has strongly opposed signing any FTA-like pact with it. The commerce ministry has launched a number of investigations against China for allegedly dumping goods in the Indian market.

India is also in favour of creating a large Asian trade and investment community. Singh said that the focus should be on creating local demand as economies try to emerge from the financial crisis. “Our focus should be on generation of stronger domestic demand in Asian economies through investment in infrastructure, creation and strengthening of the social welfare," he said.

Singh and Wen agreed on Saturday that the two countries should handle carefully the differences over the borders which should not be allowed to act as impediments.

It was important for the two fastest growing economies in the world to live in harmony to ensure that the present century belongs to Asia, both leaders said.

Singh said the vision of economic integration by coalescing the FTAs into a regional trade agreement is a pivotal step towards the integration of Asia into a common unit.

“This can lead to the creation of a broader Asian economic community," he said, adding that there was a need to move forward in this direction and “exhibit the requisite political will".

Bilateral talks between New Delhi and Beijing are expected to come under spotlight during the tri-nation meet of Russia, India and China here on October 27, as the two Asian giants seek to take forward the initiative by their Premiers to ease tensions over the border issue.

Russia will be represented by Sergei Lavrov.

Meeting in the backdrop of intensified rhetoric between the two nations over Arunachal Pradesh, Singh and Wen agreed that bilateral issues should be properly handled through talks but skirted the row over the north eastern state.

In their fifth standalone meeting, the foreign ministers of the three countries are expected to discuss regional and international issues apart from working out a strategy to explore ways to strengthen their trilateral cooperation.

The city is playing host to a major international event 23 years after the SAARC summit staged during November, 1986.

The meeting apparently being held here at the initiative of Krishna, a former chief minister of Karnataka, will also outline common goals and objectives of the countries and try to synergise their efforts to achieve them.

The visiting foreign ministers along with their team of officials will arrive in the city by tomorrow evening.

Tight security arrangements have been put in place for the meeting.

Official sources said the foreign ministers would hold a joint media briefing by afternoon at the conclusion of their meet which would also focus on issues of energy security, climate change, counter-terrorism and trans-national crime.

Krishna-Yang meeting assumes greater significance in the backdrop of heightened spat between the two nations after China objected to the visit by Singh to Arunachal Pradesh, raking up its claim over the state.

China’s assertion had evoked strong response from India which declared Arunachal Pradesh as its integral part and questioned Beijing’s involvement in projects in Pakistan-Occupied Kashmir, saying it was not in the interest of Sino-India relations.

Beijing had also protested Tibetan spiritual leader Dalai Lama’s proposed visit to Arunachal Pradesh next month but New Delhi has said he was free to visit any part of India.

Issue of visa to people from Jammu and Kashmir on loose sheets by China, to which New Delhi took exception, and Beijing’s reported move over upstream water projects on the Yaluzangbu, Brahamaputra on the Indian side, had also added to the rising temperature in their relations.

The Manmohan-Wen meeting on Saturday has, however, lent a conciliatory tone with the two leaders underlining the importance of building trust, harmony and better understanding in their bilateral ties.