New Delhi: India’s wholesale prices fell for a sixth straight week, suggesting the Reserve Bank of India (RBI) is unlikely to start increasing interest rates at a meeting next week.

The benchmark Wholesale Price Index declined 1.17% in the week to 11 July from a year earlier after falling 1.21% in the previous week, the government said on Thursday. Prices retreated 1.61% in the first week of June, the biggest drop since December 1978, according to RBI data. 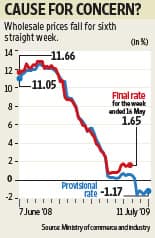 The benchmark Wholesale Price Index declined 1.17% in the week to 11 July from a year earlier after falling 1.21% in the previous week. Paras Jain / Mint

Shubhada Rao, an economist at Yes Bank Ltd in Mumbai, said RBI won’t be able to keep rates low as inflation is expected to accelerate. RBI is likely to maintain the status quo on rates next week but it may find it very challenging to keep interest rates low as inflation pressures are likely to rekindle later this year, said Rao. She expects the central bank to start raising rates in the January-March quarter.

Subbarao last cut the reverse repurchase rate to 3.25% from 3.5% on 21 April to bolster the country’s $1.2 trillion economy, predicted by RBI to grow at the slowest pace since 2003.

The bank also lowered the repurchase rate by a quarter point to 4.75% and kept the cash reserve ratio unchanged at 5%.

Falling wholesale prices are only a statistical feature and don’t mean India is suffering from deflation, Subbarao said on 20 June. RBI will revise its 4% year-end inflation estimate next week as oil and commodity prices rise, according to Subbarao.

The Wholesale Price Index published on Thursday may be revised in two months, after the government receives additional data.