New Delhi: Seeking to reduce the pressure on her party-led government for its alleged involvement in graft, and joining debate on the issue, Congress party president Sonia Gandhi put forth a five-point clean-up plan even as she renewed political support to Prime Minister Manmohan Singh, who has been facing criticism from both within and outside the party.

Gandhi’s speech on Sunday to around 15,000 delegates at the 83rd plenary of the party, which turned 125 the same day, was targeted at both an internal as well as an external audience. 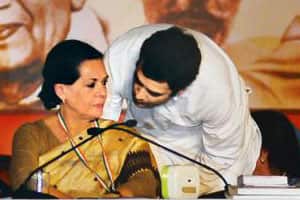 On the same lines: Sonia Gandhi (left) and Rahul Gandhi at the party’s 83rd plenary at Burari, on the outskirts of Delhi, on Sunday. Pradeep Gaur/Mint

Opposition parties, especially the Bharatiya Janata Party (BJP), are seeking to make corruption an election issue. Meanwhile, the party’s cadre is confused and demoralized and some of them publicly castigated the party’s leaders for the recent electoral debacle in Bihar.

“Both as a party and as a government we must confront corruption head on," said Gandhi, as she tried to use a mixture of rhetoric and proactive measures to counter the opposition and galvanize her party men.

With the party’s general secretary and Gandhi’s political heir, Rahul Gandhi, arguing similarly, the onus of action is squarely on the Prime Minister, who will have to ensure the executive can walk the party’s talk.

The government’s delayed response in dealing with allegations of corruption in handing out second-generation telecom licences has already come under the scrutiny of the Supreme Court.

The apex court in a ruling last week said that it would oversee the Central Bureau of Investigation, which is investigating the alleged improprieties, which led to the resignation of former telecom minister A. Raja.

Among her proposals to intensify the battle against corruption, the Congress president suggested a new system of fast-tracking all cases that concern corruption by public servants, including politicians; a fresh legislation to clear procedures and ensure full transparency in public procurement and contracts; a review that could result in the relinquishment of discretionary powers by Congress chief ministers and ministers in any public projects that involve land acquisitions; and an open and competitive system of exploiting natural resources.

“Why can’t we put in place systems that bring corruption cases to closure in a defined time frame? This would bring the guilty to book quickly and clear those unfairly charged," she added.

A long-time political observer welcomed Gandhi’s suggestions, but said a lot would depend on their implementation. “The proof of the pudding is in the eating. It has to be seen how the party leadership is going to handle or act on the instances where the land has been already distributed using the discretionary powers of the ministers," said N. Bhaskar Rao, chairman, Centre for Media Studies.

The main opposition party dismissed Gandhi’s speech as an attempt to deflect blame. “Sonia Gandhi’s speech sounds like the reaction of a party under siege. Instead of answering calls from the people on core issues, we see her replicating the Congress conduct when they were under attack for the Bofors scandal," BJP president Nitin Gadkari said in a statement, referring to a late 1980s purchase of howitzers that haunted the Congress party through the 1990s.

The Congress president also reiterated her directives on austerity measures.

“Congressmen and women holding office must not allow any doubt about their probity and integrity. It does not become representative of a party claiming to speak for the poor to indulge in greed, extravagance and luxury. Simplicity, restraint and austerity must be our chosen way. We cannot make this a law. But in a country where poverty is still widespread, let us at least have the moral sensibility to avoid vulgar displays of wealth and waste," Gandhi said.

Indicating support for the UPA government’s attempts to reform subsidies, Gandhi said, “Subsidies enjoyed by the relatively well-off must be redirected to those in need."

In an apparent reference to the controversy on Rahul Gandhi’s comments on Hindu extremism—that the growth of radicalized Hindu groups could be bigger threat to the country than the support for external terrorist outfits within India—the Congress president said her party made no distinction between various organizations stoking communalism.