New Delhi: India on Thursday made it mandatory for at least 10% of the equity of all profit-making public sector firms to be held by the public and amended the rules to free up the use of money the government will earn by divesting part of its stake for enhanced spending on social sector programmes.

The move will enable the government to avoid further fiscal pressures as it pushes up expenditure even as it faces a slump in tax revenue. The actual amount of money that can be raised by such sales would depend on how much and at what price the government divests.

Following its decision on Thursday, the government has, for a three-year period beginning April 2009, suspended the rules governing the use of divestment proceeds.

The government didn’t say when it would embark on the exercise. The disinvestment would be carried out “at an appropriate time when market is favourable", home minister P. Chidambaram said.

He declined to put a number to the amount that could be raised. “I don’t have an estimate," he said.

Thursday’s cabinet proposal comes at a time when the fiscal deficit is set to balloon to an estimated Rs4 trillion in 2009-10, or 6.8% of the year’s gross domestic product, following fiscal stimulus measures that were introduced to stem the economic slowdown in the wake of the global financial crisis. 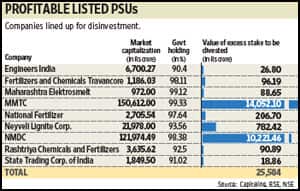 Typically, divestment proceeds are channelled to the National Investment Fund (NIF), managed by three public sector fund managers. The income generated from the approximately Rs2,000 crore corpus is used in social sector projects and for capital infusion in select public sector units (PSUs). According to the finance ministry, the average income from the NIF corpus in the last two years was 9.24%.

The government’s decision has two components—one dealing with listed profit-making units and another which extends to all other government-owned companies.

While all listed profit-making public sector firms will have to offload a minimum 10% equity stake, unlisted ones that meet three criteria will have to opt for listing on the stock exchanges by divesting similar amounts. The criteria are a positive net worth (equity plus reserves), no accumulated losses and a net profit for three consecutive years.

Each company that meets the three norms would need the Union cabinet’s approval before it can offer equity to the public, Chidambaram said.

Of the 44 listed public sector companies, nine have a government holding of more than 90%, according to the Capitaline database. If the government divests the excess shareholding in listed entities at Thursday’s closing prices, it could raise as much as Rs25,584 crore.

In the current fiscal year, 14 companies have raised Rs14,649 crore though initial public offerings (IPOs), although nine of them are trading below their listing price.

“The market has good appetite. Just look a this year’s QIPs (qualified institutional placements) and IPOs, which raised some $7-8 billion," said S. Subramanian, head of investment banking at Enam Securities Pvt. Ltd. “Besides, they (the listed public sector firms) are good quality companies."

The disinvestment process is in sync with the public statements of the ruling United Progressive Alliance (UPA), including the commitment to ensure that the government holding does not fall below 51%, Chidambaram said.

It is also consistent with the spending priorities identified separately by different ministers of the Congress-led UPA.

The “reform process has many dimensions. Increased emphasis on education and health, increased investment in rural infrastructure is of greater importance" (compared with financial sector and labour reforms), Prime Minister Manmohan Singh said on 30 October at the Hindustan Times Leadership Summit.

D.K. Srivastava, director of the Madras School of Economics and a member of the 12th Finance Commission, said social sector capital needs are small and could be met through the normal budgetary process. The move was significant, however, for offering an insight into the thinking in government echelons, Srivastava said.

“They are obviously trying to link disinvestment by substituting one capital asset by another capital asset," he said. “In that sense it is a useful indication."

Unlike earlier disinvestment exercises, Thursday’s proposal has no discretionary element in choosing companies and the proceeds are to be used exclusively for capital expenditure of social sector programmes that are identified by the Planning Commission and accepted by the government.

The cabinet decision partly helped revive Indian shares, which had opened weak on Thursday morning in line with other Asian markets after the US Federal Reserve said growth in the world’s largest economy would be muted in the coming quarters. After falling by some 300 points in the morning, the Sensex, the most watched Indian stock gauge, closed 0.95% up at 16,063.9.

“It is positive, but it was something that was announced in the budget," said Vikas Khemani, co-head of institutional equities at Edelweiss Capital Ltd. “But the rise was coincident. There is a lot of appetite for Indian shares anyway because of growth (potential)," he added.

Ravi Krishnan and Ashwin Ramarathinam contributed to this story.