New Delhi: Sunil Mittal’s quest for a piece of the lucrative African market came closer to fulfilment as the board of Kuwait-based Mobile Telecommunications Co. KSC, better known as Zain, approved the sale of its African assets to India’s largest telecom service provider Bharti Airtel Ltd in a deal that values the assets at $9 billion (Rs41,040 crore). The development is seen as a signal that the deal is almost done.

Mittal’s Bharti will also take on Zain’s $1.7 billion debt, putting the deal value at $10.7 billion. The Indian company, thwarted in two previous bids to enter the continent through South Africa’s MTN Group Ltd, needs to expand overseas as margins get crimped at home amid a tariff war.

The Zain board approved the deal on Wednesday, said a person familiar with the development, who didn’t want to be named. Spokespersons for Bharti and Zain declined to comment.

Reuters had reported the approval of the bid by Zain earlier on Wednesday. Due diligence on the deal is completed and the sale documents will be signed within several days, it cited people it didn’t name as saying. Bloomberg reported that Bharti may sign an accord as early as this week to acquire the assets, citing three people with knowledge of the negotiations.

On 14 February, Zain’s board decided to accept a proposal received from Bharti to enter into exclusive discussions with a deadline ending on 23 March to buy the Kuwaiti telco’s African assets. The assets do not include Zain’s operations in Sudan or its investment in Morocco.

Bharti announced on 21 March that its board had met the previous day to agree on the financing of $8.3 billion it needed for the proposed acquisition. The company also said that the financing was oversubscribed, with major international banks committing to underwrite the total amount.

According to a senior executive at an investment bank, who did not want to be named as he is not authorized to talk on the Bharti deal, credit rating agency Standard and Poor’s announcement on 18 March that it was revising the outlook on India’s sovereign rating from negative to stable would have had a positive impact on the pricing of Bharti’s loans. Typically, the sovereign rating is one of the factors that influences the pricing of a loan, he added.

Another investment banker, who also did want to be named, said among the factors that positively influenced the loan pricing was the lack of safe business opportunities for many banks. The rates, however, weren’t as low as those that prevailed in 2007, he said. 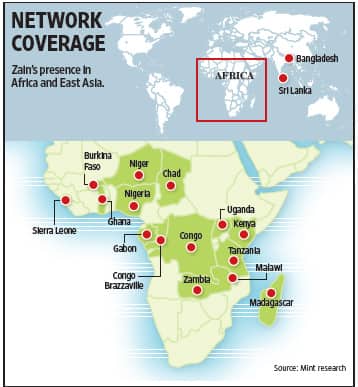 Zain is not present in two of the top three wireless markets in Africa—South Africa and Egypt.

Kawaljeet Saluja and Rohit Chordia, analysts with Mumbai-based Kotak Institutional Equities Research, wrote in a 24 February report that only two of the 15 countries, Congo and Gabon, have a per capita gross domestic product (at purchasing power parity) higher than India’s. These countries together account for 2.8% of Zain’s African subscribers and 12.7% of revenue, while 14 of the 15 countries have growth rates lower than India.

Bharti is expected to replicate its “minutes factory" model in Africa combined with a low-cost structure and infrastructure sharing.

The model refers to the Bharti’s method of paring costs by outsourcing all non-core processes, including information technology, customer contact centres and managing networks, while focusing on marketing and branding. It treats talk time as a perishable commodity in order to maximize network capacity utilization.

“While Bharti has mastered this model, pricing usage structures tend to be driven by industry dynamics rather than operator-specific strategies," Rajiv Sharma, an analyst with Mumbai-based HSBC Shares and Securities, wrote in his February report. “Initially, we believe it is unlikely that Zain’s African operations will replicate the model completely, opting instead for gradual adoption."

Low population density of between six and 162 people per sq. km against 349 in India will make it difficult to replicate the model, the Kotak report said.

“Zain had slowed down its capex investments across its African operations in 2009, and we believe Bharti will need to accelerate network investments as well," it said. “All these factors leave Bharti with little room for error on execution, and can dent Bharti’s return ratios if some of the assumptions built into the acquisition consideration do not pan out."

The Kuwaiti firm has grown in Africa primarily through acquisitions. It bought Celtel’s African operations in 13 countries in 2005 for a total consideration of $3.36 billion. Zain subsequently raised its stake in the Sudan and Tanzania units, while selling part of its share in the Zambia and Congo businesses. The other two assets, in Nigeria (65% stake) and Ghana (75% stake), were bought in May 2006 and October 2007, respectively.

Sanjiv Shankaran, Reuters and Bloomberg also contributed to this story.