Mumbai: Noel Tata, 53, took a small, but significant step into the upper echelons of the Tata group when on Thursday he was appointed non-executive chairman of Tata Investment Corp. Ltd, a listed investment firm that has substantial stakes in Tata group companies.

This is the first time Noel Tata has been appointed chairman of a Tata company. He currently steers retail firm Trent Ltd as its managing director. Tata Investment is a subsidiary of Tata Sons Ltd, the main holding company of the group.

The career of Noel Tata is one of the most closely watched ones within the Tata group. He is half brother of Ratan Tata and son-in-law of Pallonji Mistry, the largest single shareholder of Tata Sons thanks to his 18% stake. Noel Tata is married to Aloo, whose brothers Shapoor Mistry and Cyrus Mistry are on the boards of Tata group companies such as Indian Hotels Co. Ltd and Tata Power Co. Ltd. Cyrus Mistry is also a member on the board of Tata Sons.

A senior Tata group official insisted that too much should not be read into the appointment. “It (the move) is not going to create big ripples in the corridors of Bombay House." He did not want to be named as he is not authorized to speak on the matter. Bombay House is the Tata group headquarters in Mumbai. 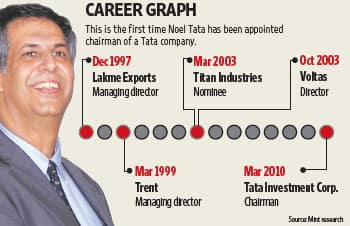 Ratan Tata turns 74 in December and guessing who his successor will be has been a bit of a sport in corporate circles.

F.N. Subedar, a close Soonawala aide, and seen as his protégé, has been appointed vice-chairman of Tata Investment. Subedar is expected to advise Noel Tata on key matters.