Home >home-page >Appointments can&#8217;t be pinned on me: Arvind Jadhav

Appointments can&#8217;t be pinned on me: Arvind Jadhav

Appointments can’t be pinned on me: Arvind Jadhav

New Delhi: Air India chairman and managing director Arvind Jadhav is facing uncomfortable questions over several hires at the carrier. These include the appointment of Pawan Arora as Air India Express chief operating officer (COO) and Stefan Sukumar as chief training officer at generous salaries by the airline that carries Rs40,000 crore of debt. The hiring programme started earlier this year at the state-run carrier as part of a turnaround plan when Austrian Gustav Baldauf was hired as its COO.

In an exclusive interview, Jadhav says the appointments issue is being reviewed and a detailed note will be presented to the airline’s board on 11 November. Edited excerpts:

What is your view on the controversy over these appointments of officials from the private sector at the airline?

The appointment (of Baldauf) has been done by a committee (with members such as Anand Mahindra, Uday Kotak, Sajjan Jindal) headed by the secretary. Then he had presented the principles of the turnaround plan, which was also agreed to by the board.

And, we have allowed the COO to do it. He picked these two people (Arora and Sukumar). The committees were formed by him and he is the person who has recommended the names. So why should I doubt him? I have to stand by the COO then. 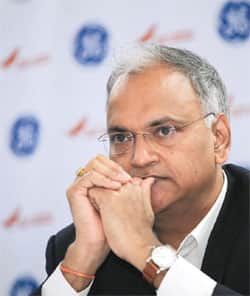 Seeking help: Arvind Jadhav says the airline, at this stage, is waiting for the government’s support along with an equity infusion of Rs1,200 crore. Bloomberg

Do you expect that if there are four or five companies there will be different training SOPs? He is there to set up a structure in which...ultimately there could be a flying training system, there can be systems for engineers, cabin crew. All these procedures have to be set up, no? He has been brought for that purpose. And we had given the freedom to Gustav to pick whom he wants to pick. And we have given the responsibility as a COO looking after cargo and passenger business that is across the four AOPs (airline operating permits). He has to have operational issues under him and not under Arvind Jadhav.

So Stefan Sukumar will not be chief of training for Air India as a whole?

No. He is in charge of the entire training procedures and everything for not only the pilot, cabin crew, but for all the training as a corporate portfolio.

On the issue of Air India Express COO Pawan Arora’s appointment, don’t you think there was a lack of oversight on your part in the board?

No, it’s not a question of oversight. The main question was...the selection was done through a committee and Gustav as a COO had recommended that one. That he presented to the board. And during the last board meeting I said that I will definitely go and meet the DGCA and then I will bring to the next board the entire details. So, this is pre-empting me to go to the board, no? Unless I submit to the board completely and then they take a view, where am I suppose to comment? I am supposed to get the board note prepared on Pawan Arora’s appointment on certain issues, controversy, which has been raised. We are taking up the matter with the DGCA and we are saying we will make a presentation to the DGCA and we have asked the COO to also make a presentation to the DGCA.

It has been reported that Arora was one of two referees for Baldauf. Don’t you think there is an issue of corporate governance here?

Are you sure he was a referee to Gustav? I don’t think so. We had a very strong headhunting agency Accord, which had gone through it. They did the entire due diligence, the interview was done by a committee headed by the secretary and they gave the recommendation. Listen, I didn’t know Gustav or Pawan Arora from Adam or Eve. So where is the question of you pinning it down to me?

There is a view that the independent board directors of Air India were kept in the dark regarding these appointments by you. How do you plan to address that?

I don’t think so. From my point of view, I am not having any differences, I have been submitting every information and the issues of these appointments…we have told Gustav very clearly—he is going to explain to the board how and why and where these appointments were made.

See, I did not make these appointments per se, please understand that. Secondly, when the appointment has been made and a person has been identified, you have to put faith in him and he has to be able to execute the job, you have to give him the necessary support.

Where does the airline go from here over the next six months?

Our focus in the next six months is that we bring as many routes as possible on operating profit. Gustav will focus on all the operational issues and he will try to make sure that entire operational issues are running smoothly. He is putting in a lot of production processes in line so that everything is systematized. And we require a lot of work to be done in terms of quality output and efficiency. So, therefore, we have divided our work—he is going to look at the entire issue of T3 operations (the new terminal in Delhi) and I will look after marketing issues and all that.

How do you see the full fiscal’s performance?

We have targeted to reduce losses drastically and we are trying to see whether we can get an operational profit by the year-end, minus depreciation and interest, and all that which is not under my control.

Any steps towards human resource harmonization?