Faridabad: The short, heavyset man sits in the fading evening light in a Faridabad tenement, occasionally stabbing the air with his hands to make a point. The 26-year-old, who works for a factory that makes parts for India’s biggest car maker, should have been a key statistic, but his name doesn’t really register in the system as a victim of an industrial accident.

A series of four workplace mishaps at Victora Tool Engineers Pvt. Ltd in the past six years cost the worker all his fingers except for his thumbs, sliced off in a “power press" that cuts metal into shapes for automobile engines. The last of the accidents took place on the afternoon of 10 July. His company has kept him on, and he’s grateful for that, but he doesn’t know for how much longer. 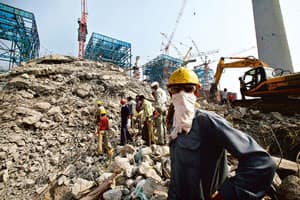 Clearing up: A 25 September photo of rescue workers at the site where a power plant chimney collapsed. The chimney was being constructed at a Bharat Aluminium Co. Ltd facility at Korba in Chhattisgarh. Gurinder Osan / AP

The accidents have left him unfit for factory or any sort of manual work, which is all he’s qualified for. He left his home in Nepal and landed up in the Haryana industrial hub of Faridabad, some 30km from the national capital, about a decade ago. A few months ago, he got married and brought his wife to stay in Faridabad.

This is the ugly side of India’s cheap-labour story, which is key to the success of the myriad small enterprises that dot India’s industrial landscape. Victora Tool makes 200 metal parts, including pedals and car seat frames, for Maruti Suzuki India Ltd (MSIL), which led a bounceback in industrial growth amid the slump, with a 42% surge in production in August from a year ago.

A low-cost workforce has given India a competitive edge in assembly line manufacturing and turned it into a major global outsourcing hub. But these gains may have been made by cutting corners and ignoring workplace safety.

Government numbers reflect an alternative reality. According to the official figures, the drop in the number of deaths is sharp—deaths due to injuries fell 4.5%, to 1,387 in 2008 from 1,453 in 2007.

Another statistic belies these numbers. Data supplied by two labour ministry agencies show that accident insurance benefits claimed by companies indicate a rate of accidents that far outweigh those that are reported.

According to the government-run Employees’ State Insurance Corp.’s (ESIC) 2007-2008 annual report, the number of people exposed to employment injury, or temporary disability benefit, as it’s known, stood at 1.02 crore cases, totalling Rs30.46 crore in benefits. During the same period, the number of non-fatal injuries, or accidents, reported by the Directorate General, Factory Advice Service and Labour Institutes (DGFASLI) amounted to 33,135.

In 2008, Haryana reported 74 fatal injuries and 112 non-fatal injuries, according to DGFASLI. During this period, 3,969 accident claims were released by the ESIC for accidents alone. 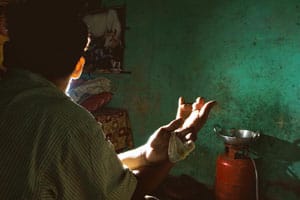 Hazards at work: The worker who lost his fingers in an accident at Victoria Tool factory. Ramesh Pathania / Mint

Time and again, the International Labour Organization (ILO) has raised concerns over India’s poor reporting system. ILO maintains that developing countries, including India, under-report accidents, and often, the data is taken as a baseline for occupational safety at work.

How this zero representation creeps into statistics is clearly illustrated by the example of Victora Tool, which supplies goods to companies such as Schindler India Pvt. Ltd, Ericsson and Denso India Ltd, apart from Maruti, according to the company website.

According to filings with the labour department, Victora claimed accident benefits for finger crush injuries with ESIC for nine of its workers between April 2004 and February 2005. Details of these accidents were not filed in their accident registers. Around 26 accidents occurred between 1994 and 2004, according to the company’s filings.

In 2005, pursuing a complaint from the Faridabad Kamgar union, labour officials took action against Victora and found 17 counts of safety violations, including lack of safety guards and slack testing of hazardous machines.

In a July 2005 letter, Victora informed the department that safety gear had been installed at the factory as part of the action taken.

The boom in manufacturing in the Asian region, including nations such as India, has not been accompanied by an increase in focus on workplace safety, says Sanjiv Pandita, a Hong Kong-based researcher with Asia Monitor Resource Centre, an organization which promotes health and occupational safety.

Manufacturing and mining processes are moving from industrialized countries to developing countries to feed the hunger for goods and commodities. “Within India, many of these processes are carried out in the informal sector where workers do not have any sort of protection," he said in an email.

Satyendra Bagga, managing director of Victora Tool, said one or two accidents occur at his company every year. Speaking over the telephone, he said they sometimes take place due to the carelessness of the workers themselves who remove their protective gear. Dil Bahadur, one of the company’s officers in charge of personnel, put the number of accidents every year at two-three. He said the last accident, a minor one, took place in June this year. 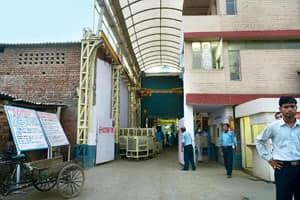 But the data completely ignores contract workers, who are hired in large numbers in manufacturing against the law. India’s Contract Labour (Regulation and Abolition) Act, 1970, prohibits the employment of a contract worker in “perennial" nature of work, meaning manufacturing processes and activity.

New hires are also expected to be reported to ESIC within 10 days, but company managements often do not file them to save costs, and sometimes filings are made after an accident occurs by backdating the employment period, trade unions, labour officials and ESIC state officials say.

Under the national employees state insurance scheme, companies contribute 4.75% of a monthly salary towards employees’ insurance plan while workers pay 1.75% in factories that draw power and employ more than 10 people, or 20 people if they don’t get electricity supplies meant for industrial units. The labour ministry is now pushing a Bill to bring all establishments employing more than 10 people under social security.

In an email response, Maruti Suzuki’s corporate communications department said the company has a system of internal and external audits to improve safety systems and spreads awareness on the issue through street plays. It said 1,000 man-hours of training are provided to each of its 220 vendors. “On a sampling basis, MSIL representatives conduct safety audits at the vendor’s end. The audits bring into light any unsafe conditions," the company said in a reply to a questionnaire.

Sarita Dogra, state medical commissioner in Haryana, said the maximum injuries that are reported are of chopped hands and fingers. “The workers are overworked, they lack concentration. They do double shifts because of better pay. But many of them are contract workers who are not supposed to be engaged in production work."

Khuntia stressed that the problem is aggravated because “most contract workers are not registered, as a result of which fatal accidents are not reported". He also said that part of the problem lies with the contractual nature of work, when one principal employer could hire several layers of contract workers and not take any responsibility to ensure safety.

Safety is also the elephant in the room that no one talks about. “In industrial forums, safety is rarely discussed. They talk about tax exemptions, credit and subsidy, technology and globalization, not safety," S.K. Srivastava, additional secretary in the central labour ministry, told an audience during a seminar on industrial safety in Faridabad’s Regional Research Institute in August.

An official of DEE Development Engineers Pvt. Ltd, a Faridabad-based pipe-fabricating company, said workers violating rules are taken off the line for four hours as a deterrent and not paid for that period.

NTPC Ltd recently started charging a penalty for violation of safety guidelines by frontline contractors. An official, who did not want to be identified, said the company had collected Rs25 lakh in the last six months as violation fees, which will go towards workers’ welfare.

The Victora worker, still recovering from his last accident, reflects Indian employers’ attitude towards accident victims, and is typical of the country’s work culture, says Colin Gonsalves, executive director of Human Rights Law Network, a network of lawyers and activists.

Companies reap riches at the expense of poor workers, he says. “Unlike Europe, Indian entrepreneurs do not care for the poor. Our country, in a sense, truly has slumdog millionaires."