Ankleshwar, Gujarat: Ankleshwar is a town on the Vadodara-Surat highway, a well laid out grid that’s home to the industrial units of a bunch of big corporate names. There are about 5,000 plants of various sizes in the town, making it one of Asia’s largest hubs for the chemicals industry.

There is a price to be paid. At night, parts of the town take on an eerie glow thanks to the pall of chemicals that seem to permanently hang in the air, making it hard to breathe.

Gujarat Industrial Development Corporation, which runs the industrial cluster in Ankleshwar, makes much of the fact that it’s a “most customer-oriented corporation...with a vision of accelerating pace of industrialization in the state of Gujarat", according to its website.

That surge of enthusiasm doesn’t leave much space for the likes of Manoj Verma, 30, who used to work in a manufacturing unit of Lupin Ltd, India’s fifth largest drug manufacturing company.

In 2006, about 600 contract workers unnerved the company management when they demanded that their wages and overtime pay be brought on par with those who were employed full-time. They also wanted monthly payment slips and the freedom to register a trade union. They also wanted safety gear, such as boots, helmets and protective clothing. 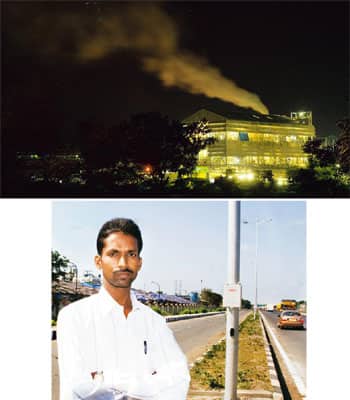 Danger in the air: (top) A factory belches smoke in Ankleshwar; (above) Manoj Verma was one of about 600 contract workers at a Lupin Ltd plant who demanded to be put on a par with full-time employees. All 600 were fired in batches over several months, according to his lawyer.

Mint couldn’t independently ascertain the reason these workers were fired.

Only 296 of the above cases have been referred to the industrial tribunal in the last three years, Mansuri said. The document referring the cases to the tribunal was reviewed by Mint. The lawyer said that the contractor violated rules by employing about twice the number of workers that he was given the licence for.

Lupin did not respond to a written questionnaire sent by Mint but it’s corporate communications head, Shamsher Gorawara, said over the telephone from Mumbai that the information was “factually incorrect," without giving any details.

Across the sprawling industrial complex bristling with chemical, paint and drug factories, contract employees who work in hazardous conditions are rarely provided equipment such as masks and gloves, unless absolutely necessary, according to Mansuri.

“Even if safety gear is provided, it’s no use because contract workers rarely get trained like the regular workers on how to use them," Solanki said.

The lack of adequate staffing and the nature of the fragmented laws undermine government efforts to enforce workplace safety, Mint has reported in the past few days, based on its findings and the views of experts. Prabhat Chaturvedi, secretary of labour and employment, rejects that contention. “All labour laws and conventions are being implemented," he said.

The ministry has been attempting to introduce a national occupational safety law since 1992, and in February this year, the cabinet cleared the policy for the first time. This will provide the framework for a safety Bill that will be introduced in Parliament.

Experts on occupational hazard issues say they are confronted with a plethora of regulations that govern safety—laws that many government officials themselves are unaware of. A government official who did not want to be identified said most states have transferred the responsibility of managing industrial disasters to revenue departments, which lack knowledge on how to carry out even a basic survey.

In all, there are 25 separate Central legislations relating to safety, from how to handle batteries and plastics to managing hazardous waste. The laws also safeguard workers against accidents sustained with agriculture machinery.

“There are so many laws, which itself is a huge hazard," says Anil Kumar Gupta, associate professor of the National Institute of Disaster Management, a Central agency that’s responsible for framing guidelines for both natural and man-made disasters.

“Piecemeal legislations" and the historical tradition of formulating safety regulations according to occupation leaves a large proportion of the population outside the ambit of safety laws, says K.C. Gupta, director general of the National Safety Council of India, an organization that offers safety training to corporate houses. “For instance, many of the small tool units operating out of shops and commercial areas do not have adequate safety guidelines," he said.

Labour falls in the concurrent list, so the Centre frames the laws while the states have the responsibility of implementing them. But the absence of a single safety law and changing regulations from state to state often pose compliance problems, companies say.

“There are today service roads, guard posts, barriers and solar-based signages," he said. But he added that safety compliance also has much to do with the “culture of the organization".

In the absence of a uniform safety code, and Indian businesses growing globally, a few companies such as L&T have voluntarily opted for OHSAS 18001, an occupation health and safety assessment series standard.

Some say even this is not enough to ensure occupational safety. Those who could ensure compliance aren’t interested. In the world of institutional financing, debt and equity private placement agreements regularly emphasize corporate governance and environmental standards, laying down stiff guidelines on money laundering and anti-corruption practices. There is, however, no binding commitment on labour relations standards and labour audits are never insisted upon. The current multiplicity of safety laws aren’t in the best interests of workers, say trade unions.

“Safety is weak because of the absence of the structure to implement them," says Ardhendu Dakshi, secretary, Centre of Indian Trade Unions. “In many cases, factory inspections are withdrawn in the name of doing away with the ‘inspector raj.’ "

All this militates against the Universal Declaration of Human Rights, under which every employee has the right to decent work, favourable remuneration and to rest, with reasonable working hours and holidays with pay.

Workers are in most cases afraid of losing their jobs to report on working conditions to factory inspectors.

Drafting legislation is one thing but monitoring violations would be an even bigger challenge. The US Occupational Safety Health Administration (OSHA), an agency under the department of labour, carries out an investigation if it receives complaints of at least one death at a workplace or four accident casualties who needed hospitalization, said Diana Petterson, OSHA public affairs director.

“It’s the employer’s responsibility to provide a safe and healthy workplace and OSHA’s responsibility is to enforce the workplace safety and health laws," she said over the phone. Penalties could range up to $70,000 (about Rs32 lakh). An OSHA release said fatal occupational injuries fell from 5,657 in 2007 to 5,071 last year in the US.

Vigorous enforcement is still not a top priority for the government. There’s a long way to go to make work environments safe and hazard-free, said Gupta of the National Safety Council of India. “To climb the mountain," he says, “you have to take the first step."