Bollywood goes off the straight and narrow path

Bollywood goes off the straight and narrow path

Mumbai: Boy meets boy; boys pretend to be gay; mother accepts the supposedly homosexual relationship. It sounds like a storyline from the depths of “parallel" cinema, but as a mainstream Bollywood flick with an A-list cast, including John Abraham and Abhishek Bachchan, Dostana is set to chart new territory on the big screen with its unabashed handling of homosexuality. 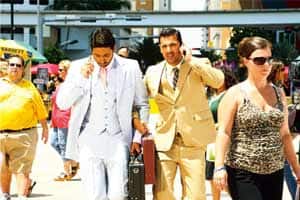 Gay goes mainstream: A still from the Karan Johar-produced film Dostana, with Abhishek Bachchan (in white) and John Abraham as lead protagonists pretending to be in love. The film’s release comes at a time when the Delhi high court is deliberating over a law that treats homosexuality as a criminal offence.

Released in cinemas across the country on Friday, the comedy, produced by Karan Johar and written and directed by Tarun Mansukhani, tells the story of two men who pretend to be a couple in order to rent an apartment and get close to a magazine editor with whom they both fall in love.

The approach is soft—the two men are not actually gay—and the vehicle of expression is humour, but with a budget of Rs45 crore, Dostana marks the latest Johar-produced film to push the boundaries out on what is socially acceptable in mainstream cinema regarding the portrayal of homosexuality.

“This is not derisive laughter," says Parmesh Shahani, author of this year’s Gay Bombay, noting that the “playful" handling of homosexuality in Dostana reflects a liberalization being seen across the wider society. “This is tongue-in-cheek. This is playful and that is a good place to start."

He adds: “Films come out of a particular context and this was the year that Dostana could be made. There were six gay rallies around the country this year, and conversations (about homosexuality) have increased in public arena."

The release of Dostana comes amid deliberations at the Delhi high court over section 377 of the Indian Penal Code, a 19th century law that treats homosexuality as a criminal offence. The court is expected to announce its verdict by the end of this calendar year.

The hearings prompted demands for change from the health ministry and the law ministry, with personalities such as author Vikram Seth and economist and Nobel laureate Amartya Sen also weighing into the debate.

It also comes five years after the release of Kal Ho Naa Ho, another mainstream Johar-produced film, on which Mansukhani was assistant director, which effectively deployed comedy to hint at homosexuality as part of the film’s subtext.

Although the film never explicitly referred to homosexuality, it featured a strong but platonic friendship between the two male protagonists, played by Shah Rukh Khan and Saif Ali Khan, which the family servant Kanta ben mistakes for a sexual relationship. Additionally, it broke new ground with a scene set in a strip-club, where the father of the character played by Saif Ali Khan tacitly acknowledges the existence of more than one sexual orientation option.

The success of the film (it was the No. 2 grossing movie of the year) and the response of the audience encouraged the A-list actors to carry the pseudo gay act on to the industry’s best-known awards ceremony—the Filmfare Awards—that year, where they were on stage together to compere the event.

“What Karan Johar did in Kal Ho Naa Ho was actually fairly radical," notes Anupama Chopra, author and film critic. “He got two major stars to pretend they are gay, and it was so successful that they could carry that act on. He made it legitimate for mainstream, major A-list people to pretend, and even to pretend is a big deal."

For Shahani, Dostana is most significant in that it takes that ground claimed in Kal Ho Naa Ho to a new level in terms of social acceptance, by having both male leads openly state that they are in a homosexual relationship, as well as by portraying the character playing the mother of one of the men accept and approve the union.

“The leap that is being made in Dostana is from fear from the older generation (in Kal Ho Naa Ho) and grudging acceptance, to their blessing," says Shahani. “Who would have thought that you would hear these words in a film?"

He adds that although changes are taking place in the legal and political arenas, “real" change can only happen in living rooms, classrooms and workplaces, where Bollywood acts as “a huge ambassador of cultural change".

It is a sentiment shared by Onir, director of 2005’s My Brother…Nikhil, a stark lowbudget drama which explored AIDS and homosexuality.

“At the end of the day, it (the film’s treatment of homosexuality) is being discussed everywhere in print and television and that is something that is really constructive," says Onir. “The very fact that there is a mainstream film about this and that people are discussing it is progress in its own right."

Gay rights activists largely welcome Dostana’s attempts to bring homosexuality further into public debate, but are also apprehensive about the film falling into the same traps of recent releases, including Madhur Bhandarkar’s Fashion, which they say caricatured and denigrated gay people.

“If the film is the way that they say it will be and it is not crude characterization, then that is superb," says Nitin Karani, a trustee of the Humsafar Trust, which advocates on behalf of gay people. “It has gotten so much exposure and has two big stars talking about the issue...but as long as it is not patronizing, because it is not nice if it is just about being gay."

However, Mansukhani is clear that his mandate in presenting the film is solely to entertain, with any debate generated by the story seen as additional benefit.

“I am not making a film to preach, but to entertain," he says, but acknowledges that “it is a statement that needs to be made, and it is a step in the right direction".

While Mansukhani and Johar might have had the box office and entertainment value firmly in their cross hairs, the upside of the gamble of making a big-budget film with A-list stars apparently at ease with homosexuality is that the next film can afford to be even more daring, according to Chopra.

“If it doesn’t work then you are 10 years behind. But if it does, then you are giving someone the courage to make a bigger My Brother…Nikhil," contends Chopra.