‘Clouds’ catch on even as concerns stay

Bangalore: For the most part of 30 years, Shodan Bhandari ran his fresh fruit juice business, now a chain of 25 Juice Junction outlets across Bangalore with an annual turnover of about Rs12 crore, on spreadsheets. A few months ago, he graduated to a mini, custom-made enterprise resource planning (ERP), or business, software that runs on a local “cloud" maintained by start-up Wolf Frameworks, and for which Bhandari pays a nominal subscription fee.

Listen to an interview with Mani Doraisamy, CTO of OrangeScape, about cloud computing and why it’s important for Indian industry

Three-year-old Wolf typifies several small firms that are building new businesses on the “cloud", an information technology (IT) term that is as nebulous as the English word it is derived from; it essentially means a network of networks delivering service on demand. Old-school computer wonks say it is all things Internet, but increasingly, the jargon-ridden IT world is using cloud computing to signal the next big thing, though it means different things to different people.

Cloud computing started off as Infrastructure-as-a-Service (IaaS); then, Software-as-a-Ser-vice caught on, which rapidly converted business processes into services, says Sharad Sharma, chairperson of the product forum at the National Association of Software and Service Companies (Nasscom). The former was epitomized by online book peddler Amazon.com, the latter by online business software company Salesforce.com. Now, Platform-as-a-Service (PaaS) is emerging, though it hasn’t reached a level of maturity yet. “Unfortunately, cloud computing has come to be applied to all three," says Sharma, who as entrepreneur-in-residence at venture capital firm Canaan Partners will announce his own venture in this space in the first quarter of next year.

Sharma says a handful of PaaS start-ups in the country, such as OrangeScape, AppPoint Software Solutions, Wolf and Agile Labs are providing the rapid application development framework to smaller firms to develop products for a worldwide cloud services market that Gartner Inc. estimates will exceed $56.3 billion (Rs2.7 trillion) in 2009, a 21.3% rise from 2008. Merrill Lynch last year estimated this market to reach $160 billion by 2011. Nasscom’s estimate is that the domestic market will be worth $5 billion in five years, with products and platforms accounting for $2 billion. 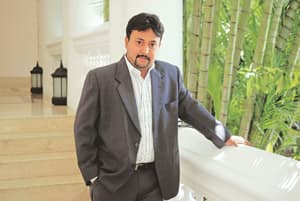 “I had struggled for 15 years to make my data accessible to my clients overseas over the Internet but couldn’t do that as Indian accounting software is not Web-based," say H.S. Jagadeesh, founder and chief executive of eCounting Corporate Management Services Pvt. Ltd, an accountancy firm which provides outsourced financial services to multinationals. With Wolf, he says, he has been able to fulfil that ambition, and beyond. He is using this application to provide SaaS to some 20 customers.

“I’ve left my core accountancy work to my colleagues. I am concentrating on SaaS, it’s more lucrative," he says. For Wolf, which serves 25 customers and at least 2,000 users, mostly in the US, this is another proof of the principle that cloud computing allows small and medium businesses to run the same software and platform as large companies.

Globally, technology companies such as Google Inc., Sun Microsystems Inc., Microsoft Corp., Hewlett-Packard Co., and Apple Inc. are either naming their products on the cloud theme or joining the open cloud test-bed called Open Cirrus to remain associated with the magic word. In India, large IT services firms are exploring the cloud to extend their existing capabilities.

“Big IT services companies know that the opportunity is huge but I don’t think they have anything to show (in products or services) as of today," says Suresh Sambadam, founder and chief executive of OrangeScape, a six-year-old Chennai-based company that has PaaS offerings. With at least 40 customers including Citibank NA, AstraZeneca Plc, Unilever, Pfizer Inc., and online learning company 24x7 Learning Pvt. Ltd, it works with several partners who use its PaaS to deliver SaaS. Wipro Ltd, for instance, has been using its platform to provide e-governance and ERP solutions.

Sambadam thinks big services firms are worried because cloud will take away their revenue. “Cloud is making life simpler for smaller companies to sell applications; bigger companies are yet to make the transition." Experts say it’s also a matter of organizational restructuring, particularly in sales, as selling SaaS is different from selling big software packages that bring sizeable incentives to the sales forces.

Even though cloud computing is as utilitarian as it can get, embracing services such as storage, accounting, fleet or library management, school attendance, human resources or audit management, analysts say its value is exaggerated. Gartner’s 2009 hype cycle for emerging technologies shows it at the “peak of expectations", implying it’s nearing a bubble.

“In India, it’s a long shot…the bandwidth is still not a commodity unlike the developed nations," says Akhilesh Tuteja, executive director, IT advisory, at tax and audit firm KPMG. In other words, the cost of accessing a cloud over the Internet is much higher than the cost of accessing services over the local area network.

But his bigger concern hovers around business models. “It needs to be rightly defined—the reason why any cloud will be accessed anytime, anywhere," says Tuteja. Citing the example of an entrepreneur who wanted to provide storage of medical images, which today can hog as much as 300MB for one image, he says such revenue models are non-starters.

He says small companies should virtually collect the infrastructure overcapacity around the world and put them to common usage. “There’s no point creating an Amazon.com. People can use existing cloud network and create a mini cloud," he adds. The Indian Premier League website last season, hosted on a cloud, is the most practical example, says Tuteja.

But poor bandwidth isn’t the only bottleneck. The locking-in of data and applications on a proprietary platform which can’t be migrated elsewhere can hamper businesses. Users also get “locked" with the service provider if the latter’s cloud is down. “Undeniably, these are the challenges, but they are services issues just as in the telecom industry, and not a technology issue. It isn’t insurmountable," says Sunny Ghosh, founder and chief executive of Wolf.

Even if some of the teething issues get resolved, going by the historical fate of technologies on the hype cycle, is a crash of the cloud imminent?

Every technology moves on this curve, so cloud computing, too, will crash when reality eventually strikes. “But since not too many have burnt their hands, the situation won’t be as bad as the dot-com era when everybody had a website," says Tuteja.

Nasscom’s Sharma sees the silver lining, even as he admits that the challenge in India is that IT, like insurance, still needs to be sold and isn’t bought by SMEs.

Even if the hype goes away, the trend will continue, just as it did in the customer relationship management (CRM) software space where the lower-priced products from companies such as Zoho Corp. and ImpelCRM allowed smaller businesses to “consume CRM at affordable prices", says Sharma. “I am bullish on PaaS, the future of our product rests on this."