Mumbai: At least three business groups are in the fray to buy a stake in Central India Power Co. Ltd (CIPCL), controlled by brothers Pramod and Vinod Mittal, which is building a 1,082MW coal-based power plant in Bhadrawati in Maharashtra, according to people familiar with the development.

Aditya Birla Group, Hinduja Group and Jaypee Group have received the offering memorandum—which consists of data on a target company meant for scrutiny by potential investors—prior to making possible bids for the stake, said an investment banker familiar with the development, who didn’t want to be named because of confidentiality reasons.

For the $29.2 billion (Rs1.35 trillion) Aditya Birla Group, which is expected to bid for 50% of CIPCL, a stake purchase will mark its re-entry into the power generation business, a group official said. Three years ago, the company sold a power plant it operated to the Reliance-Anil Dhirubhai Ambani Group.

“Power sector will be one of the new growth sectors for us and we will bid for the Bhadrawati power project," the official said, adding that the group would make a “reasonable bid". He declined to be named as he is not authorized to speak to the media. A spokesperson for the Aditya Birla Group declined to comment. 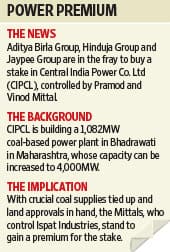 “The power sector is a logical extension for us and yes we will clearly bid for all the ultra-mega power projects and in the next few months we will have a very concrete investment programme," Ambani said at the company’s annual general meeting on Friday.

So-called ultra-mega power projects have an installed capacity of at least 4,000MW.

CIPCL has appointed investment bank SBI Capital Markets Ltd to find a partner to build the power plant that has been delayed for nearly 17 years because of a lack of assured coal supplies and environmental clearances, as well as the promoters’ inability to raise money, issues that have since been resolved.

“SBI Capital Markets will have to come to us with proposals from interested partners," Vinod Mittal, vice-chairman and managing director of Ispat Industries, told Mint over the phone on Saturday.

“We have 600 hectares of land and have entered into an agreement with Coal India Ltd to source coal," he said, adding that the plant’s capacity can be increased to 4,000MW, making it an ultra-mega power project.

The Bhadrawati project is one of the original fast-track power projects planned in 1993 with Electricite de France SA (EDF) and France-based Alstom SA as partners. Both pulled out subsequently from the project due to numerous delays in starting it. EDF owned 15.2% while Alstom had a 31.8% stake in CIPCL.

With crucial coal supplies tied up and land approvals for the project in hand, it makes sense to sell a stake in the project, analysts say.

“They can sell these projects at a premium of 40-50% like a recent CESC-Dhariwal deal for the Chandrapur project," said Madan Gopal, an equity analyst at Centrum Broking Pvt. Ltd.