Home / Home-page / In his eternal quest, Sabavala applied precepts of Cubism
Back
Share Via

In his eternal quest, Sabavala applied precepts of Cubism

In his eternal quest, Sabavala applied precepts of Cubism

New Delhi: On being asked why he painted landscapes, Jehangir Sabavala had told art historian Yashodhara Dalmia in a 2004 interview, “I think, as a painter, in all those hours spent alone, you are not only thinking of the painting. You are thinking of yourself, of death, of mortality, of tragedies and happiness." 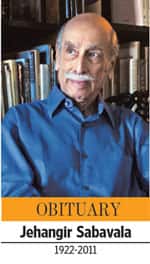 Sabavala’s career has spanned more than 60 years since his first solo exhibition held in a hired room of the Taj Mahal Hotel in Mumbai, put up with the help of fellow artist M.F. Husain and a few carpenters.

Born in 1922 in Mumbai, Sabavala was known to his friends and peers as a man of immense personal charisma, a “true gentleman". He studied at some of the best-known art colleges. First at the Sir JJ School of Art in Mumbai, before leaving for the Heatherley School of Fine Art in London in 1944. He later went to Paris to study at the Académie André Lhote from 1948 to 1951, the Académie Julian from 1953 to 1954, and the Académie de la Grande Chaumière in 1957.

The artist worked most often in oils, creating landscapes, seascapes and figures deftly with his brush.

If his gurus in the early years were André Lhote and Lyonel Feininger, in the middle years, more volatile brush strokes led to landscape paintings of rarefied beauty. In these canvasses, the subtle colouring and the vast amplitude of land, sky and sea provided a sense of the infinite. By the 1970s and 1980s, his landscapes and seascapes were dotted with wanderers and seekers, emblematic of pilgrims in an eternal quest. Many consider paintings from this period, such as the serene and delicate Cobweb Cloud (1973), to be his best work. 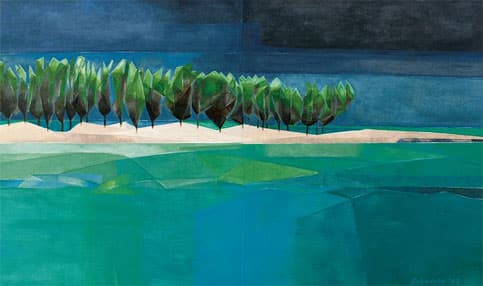 Online auction: In June 2010, Sabavala set a personal record when his painting The Casuarina Line I sold for Rs 1.7 crore at more than three-and-a-half times the pre-sale estimate of Rs 50 lakh.

“He found his own voice somewhere amongst these influences. And then he was part of no ‘isms’...no groups, when it came to his work," says Geetha Mehra, director of Mumbai’s Sakshi Art Gallery, which represented him for the last 10 years.

“But he was very social otherwise. His elegant dinner parties were much sought after in Mumbai," she adds.

Sabavala was, in fact, very much a part of the city’s cultural cognoscenti even up to his 70s. Over the years, he forged close friendships with those such as poet-artist Gieve Patel. He mentored, among others, Mumbai writers and poets such as Ranjit Hoskote, Jerry Pinto and Arundhathi Sumbramaniam.

To the artist’s credit are over 30 solo exhibitions held in India and abroad. Over 2005-06, Sakshi Art Gallery and the National Gallery of Modern Art in Mumbai and New Delhi, respectively, organized Jehangir Sabavala: A Retrospective, which exhibited more than 200 of his paintings. His most recent solo exhibits included Ricorso at Sakshi Art Gallery in 2008, which then travelled to the Aicon Gallery in New York in 2009.

As a perfectionist, Sabavala was not a very prolific artist. And so the price of his artworks have steadily increased over the years. In June 2010, he set a personal record when his landscape painting The Casuarina Line I sold for ₹ 1.7 crore at Saffronart’s summer online auction, at more than three-and-a-half times the pre-sale estimate of ₹ 50 lakh.

Dinesh Vazirani, chief executive officer of Saffronart, says Sabavala had called him soon after the auction record was announced to tell him how happy he was. “I’m glad that he got to see this in his lifetime," he says.

The artist had even begun to experiment lately. As Hoskote, who is also his biographer, observed, “Classicist though he is, Sabavala has loosened up in his recent work. He has pitched his palette higher...opened up his frames, more accustomed to pictorial meditations on lakes and oceans, to include the concrete and glass reality of Mumbai’s skyscrapers."