The move, say some analysts, will also ensure that credit for popular programmes such as the push for food security and reservation for women in legislative bodies accrue directly to Gandhi and the Congress party, helping it cement its leadership of the coalition. 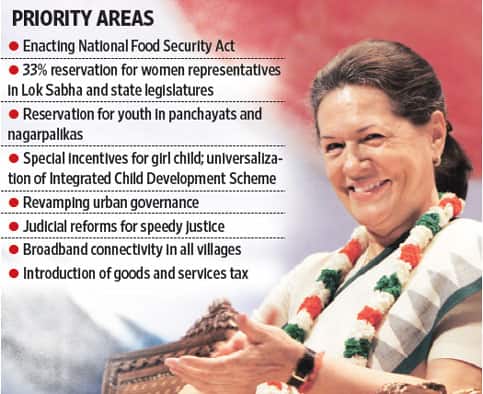 The revival of NAC, say other analysts, may also be tacit admission of the fact that the political leadership of the Congress party is becoming impatient with the pace and direction of government policy. They add that the party is keen to regain the political capital it reaped after an unexpected margin of victory in the 15th general election that ensured a second term for the Congress-led United Progressive Alliance (UPA) government. The Congress won 206 seats, the largest by any party since 1991.

“This (the revival of NAC) is only for facilitating the coalition rule because the coalition era is here to stay," said senior Congress leader V. Kishore Chandra Deo. “She (Gandhi) has always been influencing the policies. But this move has made it formal and policies could be formed with wider consultation with experts."

According to a press note issued by the Prime Minister’s Office, Gandhi will hold the rank and status of a cabinet minister. Gandhi had quit NAC in 2006 over the office of profit controversy; she also stepped down as the Lok Sabha member from Rae Bareilly but was re-elected. NAC formally ceased to exist on 31 March 2008.

Zoya Hassan, a professor of political science at the Jawaharlal Nehru University said NAC, which played a crucial role in the creation of the Mahatma Gandhi National Rural Employment Guarantee Scheme, a flagship programme of the UPA government that is perceived to have played a crucial role in returning it to power, will be an interface between the government and civil society.

“It gives an opportunity not only to Gandhi—she will obviously play a crucial role in influencing the policies—but also others to work as an interface between the government and the public. It can help translate the aam aadmi (common man) rhetoric into concrete social welfare measures and also act as a watchdog in their implementation," Hassan said.

Analysts also point out that the move is significant at a time when the party’s perception is that a section of the government is “not very serious" about key electoral promises. The Congress party in general and Gandhi in particular are very keen on the Women’s Reservation Bill, and legislation of a National Food Security Act (NFSA) guaranteeing 25kg of foodgrains at Rs3 per kg for poor families.

Senior Congress leaders have privately admitted that Gandhi was upset with the government’s inability to earnestly push for the Women’s Reservation Bill—which was passed by the Rajya Sabha amid pandemonium but could not be brought to the Lok Sabha—and NFSA. A section of party leaders including Gandhi wanted to bring NFSA as a social safety net for the poor. However, financial constraints have forced the government to scale down the objectives of the programme by restricting it only to providing food security to the poor as opposed to a wider plan of providing nutritional security.