Ishan Institute of Management & Technology sits among several private colleges in this growing New Delhi suburb, a campus of concrete buildings, expansive lawns and fresh-faced students hailing from places such as Kota in Rajasthan and Kanpur in Uttar Pradesh.

Founded in 1995 for 60 students, Ishan has since grown 10-fold, a sign of the demand for higher education, especially in areas such as finance and business, says executive director D.K. Garg. But each time he wants to increase enrolment, Garg says he has battled with the government body in charge of private colleges—the All India Council for Technical Education (AICTE).

The experience of Ishan, which offers a postgraduate diploma in management, highlights one of the key challenges facing a booming private education sector in India and the body tasked?with?regulating it.

Institutes such as Garg’s use their experience to dub the government as overly meddlesome and corrupt.

AICTE member-secretary K. Narayana Rao says his organization is only trying to make sure private colleges don’t take students and their parents for an expensive ride. (Ishan, for one, charges Rs1.6 lakh ?for a two-year course.) In an interview, Rao said he could not comment on Ishan specifically, claiming he was not familiar with the case, but said alleged corruption at AICTE is an exception rather than the norm.

“Let us be frank on this issue," he says. “We can’t say that 100% we are genuine." But, Rao says, if he hears 90% of the time that inspections of educational institutes by AICTE-appointed inspectors are going well, he accepts it. 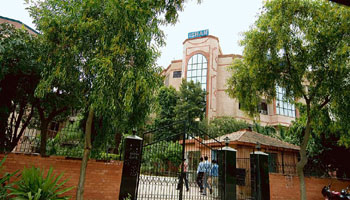 Back in 2005, when he tried to double seats from 120 to 240, Garg says he faced demands for a Rs50 lakh bribe and, specifically, to pay for an expensive dog—Garg can only recall it was a “white, long-haired" breed.

Meanwhile, Ishan has steadily obtained clearances and Garg’s institute has grown. In July 2006, Garg again applied for 120 more seats. He says his initial refusal to pay a bribe resulted in two unannounced inspections. He alleges he knows of other schools where inspectors give advance notice and expect multi-course meals to be waiting.

At Ishan, they first came on 11 January, then again on 3 August. Both times they ended up citing a faculty shortage, says Garg. AICTE requires a teacher-student ratio of 1:15. Ishan, Garg maintains, actually does a lot better, with one teacher for every 12 students.

During the August check, Garg says, the inspectors also noted a shortage of computers.

Waving purchase receipts for 349 laptops in front of a reporter, Garg says he cannot understand how his institute, which also has 90 desktop computers, didn’t meet the AICTE guideline of one computer for every two students.

“I want to know how laptops are not computers. It is just a system to harass and insult college promoters," says Garg.

AICTE member-secretary K. Narayana Rao says his organization is only trying to make sure private colleges don’t take students and their parents for an expensive ride.

“I don’t think we blindly say that laptops are not computers," Rao says. “Maybe the college is bringing (computers) at that point of time and putting the laptops to confuse or say that they have the requisite number," he alleges.

In August, more than a year after he had asked to increase the seats from 360 to 480, AICTE rejected Ishan’s request.

Garg, a colourful man who teaches “Art of Living" classes and writes books on relationships, is no stranger to controversy. In 2003, students at Ishan accused Garg of physically threatening them for seeking a fee refund, according to a 19 November 2003 article in Chandigarh’s The Tribune, which said 11 students waged a hunger strike because an engineering course started by Ishan had not been fully approved by Allahabad Agricultural University.

When asked to comment, Garg provided a copy of a judgement in Hindi from a consumer court clearing the institute of wrongdoing; he said the engineering course has since been abandoned.

A senior official in the ministry of human resource development, which oversees education, says college promoters withdraw complaints of corruption at even the hint of an investigation. “They seem to prefer to live with the system. Then, how can we catch the guilty?" says the bureaucrat, who requested anonymity.

AICTE is often the lightning rod for critics of India’s higher education system, which has recently become the focus of many companies and lobbying groups, as well as the source for a booming cottage industry of education entrepreneurs.

Rao says there has to be a balancing act between loosening the government’s grip on education and cracking down on fly-by-night operators. Rao has been at AICTE for a little under a year. He was previously a professor in mechanical engineering at Hyderabad’s Osmania University.

“In spite of these (AICTE’s) rigid norms, still, quality to a certain extent is compromised," says Rao. “We are looking for the mechanism to improve quality. Better facilities, better faculty, better environment, better library, better computers lead to a better quality."

Rao says he is trying to reform AICTE’s approval process for private colleges. Key steps include instituting a time-bound window for approval, which will close at the end of December for the next academic year. He also wants to shift cases of individual colleges online to introduce transparency in communication between AICTE and the colleges.

CII says AICTE is already showing signs of improvement, such as adding options in engineering.

“There are limited number of options, which AICTE approves. For example, they have civil engineering, but not highway engineering," says Y.S. Rajan, principal adviser for CII. “But recently, AICTE has suggested that industry suggests more options, which gives more flexibility to colleges."

CII’s various regional branches are working to give a list of suggestions to AICTE. About 6,000 private colleges with courses of more than a year in engineering, business management, pharmacy and computer application function under AICTE approval in India. A significant—growing yet unquantified—number of colleges also operate and admit students without the body’s nod, gaining permission instead from state governments.

Once approved, AICTE inspectors are supposed to review the college after two years, although some colleges claim inspectors land up more frequently. Colleges must also apply for fresh permission every time they want to add more students or courses.

In March, AICTE released the first-ever list of 169 private colleges functioning without approval on its website (www.aicte.ernet.in). The council says the list was motivated by students’ complaints. Often, at the start of an academic year, the body’s grievance cell receives 50-60 queries from students or parents, asking if an advertised institute has AICTE permission.

Separately, another statutory body, the Monopolies and Restrictive Trade Practices Commission, has asked 105 business schools to furnish details such as fees, faculty qualifications and advertisements. An official of the commission did not disclose details, but said the action is based on directions from the ministry of corporate affairs to police misleading ads.

Five months after AICTE published its unapproved list, the government of Maharashtra, home to 84 of those unapproved colleges, hit back, saying most of its schools had the state’s permission to function.

In an affidavit to the Bombay high court on 13 August, the state’s education department said both AICTE and Maharashtra State Board of Technical Education are slow to respond to industry needs in approving more colleges and courses.

Meanwhile, companies such as Tata Consultancy Services Ltd (TCS) and Wipro Technologies Ltd aren’t waiting for the various standards bodies to sort out their disputes.

Both technology companies, which hire in large numbers, are accrediting private engineering colleges on their own as a precursor to on-campus recruitments. Thomas Simon, vice-president for human resources in TCS, says his company accredits private colleges regardless of whether they have AICTE approval or not.

“We believe in our own accreditation," says Simon.

A leading educational think tank, the New Delhi-based Centre for Civil Society, says AICTE has wrongly assumed four roles: “It sets the standards, rates institutions according to those standards, sets penalties and even enforces those penalties. All functions cannot be with one agency," said its president Parth Shah, who has authored several papers on education. “Plus, it is woefully short-staffed to fulfill all these functions."

He also says that the government has experimented with alternative models in regulation in other areas. The shipping ministry, for instance, sets benchmarks for maritime colleges, then invites private rating agencies to rate them. Many college officials say private higher education cannot flourish unless the regulatory body assumes a positive role.

“We are in favour of regulation, but regulation should be towards growth and strengthening, not control and command," says Ajit Rangnekar, deputy dean of the Indian School of Business (ISB) in Hyderabad, a private business school founded in 2001 in partnership with the Kellogg Graduate School of Management and the University of Pennsylvania’s Wharton business school by a group of business leaders. The institute is now considered a top-notch business school in India. “One is also worried that high-quality business education in India is not growing," he adds.

Despite its pedigree and growing reputation, ISB’s name also appeared on AICTE’s unapproved colleges list. That’s because it is registered as a non-profit company, instead of a non-profit trust or society, according to Rao, who adds: “We are still trying to see how we can give it approval."

He also points out that some colleges on the list are unapproved simply for failing to provide complete information in their ads. Some institutes also fail to mention their affiliation to a state university, which can facilitate and often almost guarantee subsequent approval from the council.

AICTE also say that many colleges are unapproved for failing other infrastructure criteria. For instance, it mandates that the built-up area of the college should not be less than 12.5 sq. m per student.

The Indian Institute of Planning and Management (IIPM) says it has moved the Delhi high court against AICTE over its still unapproved status.

“I will not let a single inspector of AICTE enter my institute," says Arindam Chaudhuri, promoter of IIPM. He’s a well-known face on IIPM’s signature ads that exhort students to “earn a globally renowned and accepted BBA degree and MBA degree in just three years". The ads say “IIPM students are taught by more than 15 professors from Ivy League universities like Harvard, Columbia and other top 10 B-schools of the world".

For its part, AICTE says it simply wants to make sure such claims by any institution are really true. Rao says he does not mind taking the battle against unapproved colleges right up to the Supreme Court, saying: “That stage will come, we will proceed legally."

As for Ishan, Garg is no longer willing to complain about AICTE or discuss the latest status of his expansion requests, saying his conflict with AICTE had been resolved. In a 25 October telephone interview, Garg would only say that he has “scared" AICTE with right to information (RTI) requests, part of a two-year-old law that allows Indian citizens to seek information on the decision-making processes of departments and bodies run by the government.

“Everything is fine," Garg now says. “My seats have increased by 120."