Living in: love in the time of learning business administration

Living in: love in the time of learning business administration

They have always been lucky when it comes to hot jobs. Now, students at the Indian Institutes of Management (IIMs) might say the same for love.

With the arrival of more women, older students and open attitudes, IIM campuses are seeing a shift in dating. One by-product—a quiet reality that few talk about openly—is the live-in relationships in hostels.

“Officially, people could not have a live-in relationship. But in my second year, I pretty much shacked up in my girlfriend’s room," said Ram Kumar, who earned a postgraduate diploma in business administration from the top-ranked IIM Ahmedabad (IIM-A) in 2002.

Kumar, who now works in London for an investment bank, would only speak about living-in with his girlfriend as long as it was made clear that he then married her a year after graduation.

Despite adapting many elements of campus housing in the West, where students are largely free to come home as late as they please—if at all, when it comes to the opposite sex, Indian colleges and graduate schools have largely hung on to hostel curfews and restrictions of visits. One girls’ hostel at Delhi university successfully lobbied recently for an extension of curfew, saying they needed to study at night. Changing mores: The arrival of more women and older students on campuses such as the Indian Institute of Management Bangalore, pictured here, is changing attitudes towards dating and live-in relationships.

IIM officials say they have chosen intentionally to subject students to minimal supervision and treat them as adults. “If students cannot manage their own lives, how do you expect them to become leaders?" asks Ashok Shah, spokesman for the flagship institute IIM-A.

Most of the IIM hostels do not assign separate wings to girls and boys—hostels are typically organized with one person assigned to a room. The room is just about large enough to hold a single bed, a cupboard and a desk. Bathrooms are shared and not co-ed; thus, live-in arrangements typically mean one partner heads back to his or her assigned room in the morning to get ready for classes.

By Kumar’s estimate, 50-70% of dating couples live together on campus, but do not talk about it for fear of creating a scandal, usually only among professors and parents rather than their peers. On some campuses, hostels spell out that men should not be in women’s rooms, and vice versa, but implementation among twenty-somethings might actually face ridicule.

That was the case with a thread started by a user of Pagalguy.com, a website popular with B-school applicants and students, on how his friend was always at his girlfriend’s.

“He (the complainer) was laughed at," said Apurv Pandit, editor-in-chief of the site. “Live-ins have increased. And to a level where married students can split on-campus and go with separate partners."

At the IIM in Bangalore (IIM-B), where there are 110 women out of about 500 students, the women are assigned to women-only floors, though an outsider can’t distinguish where the boys’ rooms end and the girls’ begin.

“People are mature enough to handle this," said Saikat Dutta, a 2008 batch student at IIM-B, who is dating a student from the SP Jain Institute of Management and Research in Mumbai.

Though hostel rules at IIM-A require signing-in to get into the girls’ area, they are not strictly imposed. The faculty points out that B-school projects go on for hours and require group work. “These (study) groups are usually mixed groups. Any kind of laws will create artificial barriers," said an associate professor at IIM-B, who he didn’t want to be named. The code of conduct at IIM-B only requires outsiders to sign-in to get into a hostel room.

That’s not to say it’s easy for students, who still have their share of covering up to do.

“If my parents get to know of my girlfriend, they will blame her for my not calling home often, which I don’t do anyway," said a student in the 2007 batch at IIM-A, who got placed with an investment bank, but didn’t want to be named. 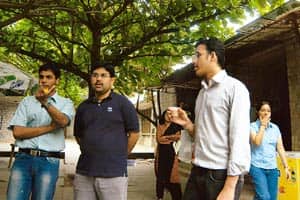 Relationship management: Saikat Dutta (centre), a student of IIM Bangalore, is in a ‘cross-campus’ relationship; his girlfriend is at the SP Jain Institute of Management and Research in Mumbai.

“They are not kids, but parents remain anxious," said Joy Mitra, dean of FMS and warden of the hostel. “We don’t monitor, but we remain informed."

Delhi university’s strict hostel norms drew protests from at least one college, Ramjas, where girls won a two-hour relaxation of curfew hours from 7pm to 9pm earlier this month. With candlelight protests carried out on three nights, young women said evening duties, such as attending coaching classes for MBA entrance tests, get impeded by the early curfew. “I hope our protest reaches other hostels," said Mona, an undergraduate science student of Ramjas College who said she uses only one name.

Abhishek Sipani is not in a relationship, but the 2008 batch student at FMS said those who want to take their relationship further, “quietly look for other pastures".

At the Indian Institute of Technology (IIT) Delhi, which offers mostly undergraduate courses in engineering, girls are kept out of boys’ rooms and vice versa at all hours of the day. Any violation of this rule can lead to expulsion.

“There are dating couples and they can go for movies, etc., but I do not know of anyone spending a night together," said Atul Garg, an IIT-Delhi student of the 2008 batch. He also points out the lack of opportunity to get dates—his area of specialization, electrical engineering, has seven women out of a class of 82. In an entire batch of engineering graduates, girls rarely exceed one-fourth.

The smaller the town, it seems the hostel rules start to automatically toughen.

At the National Institute of Technology Calicut (NITC) in Kerala, a code of conduct prohibits students from loitering in corridors or sitting on steps of the college, while asking them to respect their elders. The girls’ hostel has a curfew of 7pm, while the boys do not have any restrictions on timings.

Paul Joseph, former dean of students and currently head of the electrical engineering department at NITC, said the code of conduct was evolved to keep the college free of politics. Curfew hours are necessary to please parents. “A mixed hostel does not go with our cultural scenario," said Joseph, explaining that a village road runs through campus. “This is not an isolated paradise," he added.

The private Symbiosis Centre for Management and Human Resource Development in Pune, which offers postgraduate studies in management, simply does not allow opposite sexes in each other’s rooms. “They are busy for 18 hours a day," insists director K.S. Subramanian. “Where will they find the time?"

He should know the answer by now. This year alone, Subramanian said he has attended the weddings of three couples—all graduates from the last batch.