An index measuring prices of pulses, wheat, rice, vegetables and other food articles compiled by the commerce ministry increased 17.4% in the week to 16 January from a year earlier, following a 16.81% gain the previous week. Food inflation reached 19.95% in the week to 5 December, the fastest pace since December 1998. 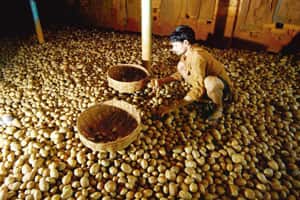 Out of reach: Prices of staple foods such as potatoes surged 57.5% in the week to 16 January from a year ago, while the cost of pulses rose 46.8%. Indranil Bhoumik/Mint

“A rebound in private demand, rising inflationary pressures and a surge in capital inflows have set the stage for policy reversal in 2010," said Sonal Varma, a Mumbai-based economist at Nomura Holdings Inc., Japan’s largest brokerage.

The Reserve Bank of India (RBI), which is scheduled to unveil its monetary policy decision on Friday, is likely to increase the amount banks are required to set aside as reserves to 5.5%, from 5%, and raise the reverse repurchase and repurchase rates by 0.25 percentage point each, Varma said.

Indian stocks pared gains. The Bombay Stock Exchange’s benchmark Sensex index advanced 0.1% to end the day at 16,306.87 points. The gauge had gained as much as 1.4% earlier. The yield on the 6.35% note due January 2020 held at 7.56% in Mumbai, according to the central bank’s trading system.

Governor D. Subbarao had said last week he aims to support the economic recovery without compromising on price stability. He took the first steps to reverse monetary stimulus in October when he ordered lenders to keep a higher proportion of their deposits in government bonds.

India’s economy expanded at the fastest pace in six quarters in the three months through September as manufacturing jumped, aided by record-low interest rates, government spending and tax cuts. Industrial production grew 11.7% in November, the fastest pace in two years.

“The speed at which the economy is bouncing back and the urgency to manage inflation expectations in our view require the RBI to hike the cash ratio and policy rates, thus sending a clear signal that it is on the case," Varma said.

India’s benchmark wholesale inflation rate was 7.31% in December, rising from 0.5% in September. Prices are rising after the June-September monsoon rains—the main source of irrigation in Asia’s third largest economy—were the weakest last year since 1972, hurting the output of rice, sugar, pulses and wheat.

She expects inflation to accelerate to 10% by the end of March. Companies may raise prices further on rising input costs, she added.