New Delhi: Three months ago, Jaipur-based Rahul Singhi, a 25-year-old architect, bought himself a Harley-Davidson Iron 883 paying around ₹ 7.6 lakh. Singhi isn’t the person who comes to mind when you think Harley-buyer in India. The image that usually does is of a fat-cat banker or executive, or even journalist, someone in his mid-30s or early 40s (yes, and maybe someone who’s going through that old cliche, a mid-life crisis). 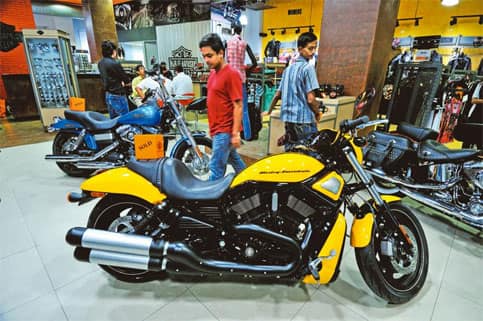 “Budget was an issue. I had been saving a lot and had ₹ 7-8 lakh in hand," said Singhi. “I had two options—a Kawasaki or a Harley. I couldn’t say a no to Harley."

That kind of behaviour explains why Harley has succeeded where other superbike makers have faltered in India. Data collected by Mint from four of the company’s five dealers located in New Delhi, Mumbai, Bangalore, Chandigarh and Hyderabad shows that the company has sold around 1,200 bikes so far. Executives at the Hyderabad dealership of the company declined comment, and those at the other four dealerships who provided details asked not to be identified. Around 700 of these 1,200 bikes are yet to be delivered. To put the number in perspective, most people Mint spoke to for this story put the number of superbikes in the country at around 4,000.

Harley-Davidson Inc.’s local office said in an email that it would not be possible for it to share sales details, but added that it has received tremendous response from customers after it commenced retail operations just around a year ago.

“Be it small towns, urban centres or villages, we’ve had customers reaching out to us from across the length and breadth of India. While a large section of the demand has come from Delhi and Mumbai, primarily driven by their large population, cities like Hyderabad and Bangalore are excellent markets," the email said.

That kind of response may explain why Harley has chosen to set up a local assembly plant for three models—Super Low, Iron 883 and Forty-Eight—at Bawal in Haryana. The assembly plant started operations earlier this year and the company opened bookings for the models assembled locally on 1 January. The Bawal factory is the company’s first in Asia and only the second outside the US after Brazil, where the company set up an assembly plant in 1999.

Harley has so far played its cards well, said an analyst.

“There are a lot of factors in favour of Harley in India," said Nikhil Deshpande, a research analyst with a Mumbai-based brokerage. “It got it right by setting up an assembly facility in the country. This gave it the first-mover advantage and made its bikes more affordable. Moreover, it is offering attractive finance options and hassle-free servicing."

Indeed, service, most experts say, was why even people who could afford to import superbikes into the country were chary of doing so. And the demand for the three locally assembled models has shot up; they are priced between ₹ 6.48 lakh and ₹ 9.90 lakh (in Delhi). Bikes that are imported attract an import duty of 91.28%, while those assembled locally use imported kits (as they are called), which attract an import duty of only 30%. But it isn’t clear whether financing matters.

Singhi, for instance, didn’t opt for the financing option. Through partnerships with ICICI Bank Ltd and HDFC Bank Ltd, Harley provides finance for up to 75% of the price of a bike. Had Singhi gone in for this option, he would have paid a monthly instalment of ₹ 10,728 for five years.

Harley currently sells one-third of its bikes outside the US and the company’s focus on markets such as India will only increase, said an analyst, who did not want to be identified.

Harley expects to ship between 221,000 and 228,000 motorcycles worldwide in 2011, according to the company’s annual report, a number that represents an 8% growth over last year. “If this trend continues, Harley-Davidson could be selling more motorcycles abroad than domestically soon. This is not because overseas sales are booming, but because domestic sales are crashing," added the analyst.

Harley’s India plans include dealerships in Ahmedabad, Chennai and Kolkata, which will open for business over the next year. Deshpande, however, is cautious about terming the company’s Indian foray a success. “The number may look big if you compare it with the market, but you have to understand that these are big-ticket buys and people waited for the Harley to come to the country," he explained. “Let us wait for some more time and see if the momentum continues."