EIH considers merger of Raheja JV with itself

EIH considers merger of Raheja JV with itself

Kolkata: EIH Ltd, which owns and manages the Oberoi group of hotels, could merge EIH Associated Hotels Ltd—a joint venture between the Oberoi family and the Rajan Raheja group—with itself, according to P.R.S. Oberoi, who is the chairman of both companies.

“We are thinking about it (a merger between the two companies)," Oberoi told Mint, but didn’t elaborate on why the merger was being considered. 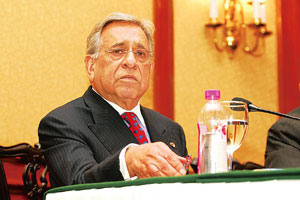 ITC’s stake, which is just below the 15% level that will force it to make an open offer to buy shares from EIH shareholders in keeping with Indian law, has been built over the past 10 years at a cost of Rs215.7 crore. However, the company’s chairman, Y.C. Deveshwar, has consistently said that his aim isn’t a hostile acquisition. “We are not interested in a hostile takeover… Sometime, if the other side (EIH) wants to join hands with us, it (the stake) will come handy," he had said while addressing shareholders at his company’s annual general meeting on 24 July.

The exact extent of the increase in the holding of the Oberoi family and its associates in EIH after the merger will depend on the swap ratio or the number of EIH shares that will be given in return for EIH Associated shares.

The promoter’s holding in EIH is 46.42%. A holding of at least 50% translates into a simple majority. EIH itself owns 36.1% in EIH Associated Hotels. The Oberoi family through investment firms owns 3% more in it.

Rajan Raheja is a close associate of Oberoi and was formerly a board member of EIH.

ITC declined comment on the issue. “We have nothing to add at this moment," said its spokesperson.

EIH’s vice-chairman S.S. Mukherji, who is also a director of EIH Associated Hotels, clarified that formal deliberations on a merger had not started yet.

Asked about Deveshwar’s overture for “partnership", Oberoi said, “They haven’t sent us any proposal. We will consider if they send us a proposal… We have no rivals."

EIH Associated Hotels was founded 26 years ago to hold properties that were not wholly owned by EIH or the Oberoi family, explained Mukherji. Over the years, it has consolidated its stake in properties that it owns, most of which go by the Trident brand.

Oberoi said the company was going through “most difficult times", worse than even 2001 when in the wake of the terror attack on the World Trade Center in New York, the hospitality industry had gone into a tailspin.

He added that a revival was unlikely till the winter of 2010.