New Delhi: India’s Left Front, which supports the ruling Congress-led United Progressive Alliance (UPA) government without being part of it, withdrew support Tuesday morning, and while the widely expected act did not have any impact on the bond and currency markets, it actually helped the stock market recover somewhat.

The move leaves the UPA, which has 228 representatives in the Lok Sabha, 44 seats short of a simple majority in the House—required for the continued reign of this government—but Prime Minister Manmohan Singh said in Hokkaido, Japan, where he is attending a meeting of G-8 (a group of developed countries), that he didn’t think the Left Front’s exit would “affect the stability of the government"./Content/Videos/2008-07-09/Jyoti on Left1_MINT_TV.flv36529b18-4d06-11dd-833a-000b5dabf636.flv

On 17 May 2004, when the stock markets first realized the Left Front would be a key ally of the government, the Sensex plunged 564.71 points, or 11.14%. The Left Front is seen as anti-reformist by most businessmen and stock market investors, and has consistently opposed the increase in foreign direct investment limits for key sectors and the government’s sale of public sector companies.

Leaders of the Left Front, which has 59 representatives in the Lok Sabha, have sought an appointment with President Pratibha Patil on Wednesday morning to submit a letter on their withdrawal of support. A letter signed by the general secretaries of the four communist parties that constitute the Left Front and sent to external affairs minister Pranab Mukherjee, the point man for the Congress’ negotiations with the Left Front, said: “As you are aware, the Left parties had decided that if the government goes to the IAEA (International Atomic Energy Agency) board of governors, they will withdraw support. In view of the Prime Minister’s announcement (of the government’s decision to go to IAEA), that time has come."

On Monday, while addressing a press conference en route to Hokkaido, the Prime Minister had said India would go to the board of IAEA “very soon".

The Left Front is opposed to the Indo-US civilian nuclear deal. By going to the board of IAEA, which needs to approve India-specific nuclear rules or so-called safeguards, New Delhi is preparing the ground for going to the Nuclear Suppliers Group (NSG), countries that export nuclear technology. Approvals from IAEA and NSG will mean the Indo-US nuclear agreement can be discussed and passed by the US Congress, which is expected to meet one last time in September ahead of presidential elections in November. 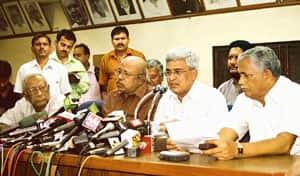 Parting of ways: CPM’s Prakash Karat (second from right) announces his party’s withdrawal of support for the UPA government on Tuesday. (Raveendran / AFP)

Congress spokesperson Manish Tewari reiterated the Prime Minister’s position and said “the government will prove it has the numbers in Parliament".

Parliamentary affairs minister Vayalar Ravi echoed this view after a meeting of the party’s “core committee": “We are confident that we will prove our majority on the floor of the House. The UPA has enough support from other political groups," he said. Leaders of the UPA constituents such as the Rashtriya Janata Dal’s chief Lalu Prasad and the Nationalist Congress Party’s chief Sharad Pawar also believe the government will be able to prove its majority in Parliament. And Mukherjee said that the government would not go to the board of IAEA “until it wins the trust vote" in Parliament.

Meanwhile, the SP seems to have run into some problems with seven of its representatives in Parliament not attending a meeting on Tuesday to discuss support to the government.

Claiming about 12 MPs, including some who attended Tuesday’s meeting, were also against the nuclear deal, Rawat said that in case of a trial of strength, he would defy the party whip.

However, SP MP Shafiqur Rahman Barq, who attended the meeting said, “Every (SP) MP is totally satisfied with the deal and will vote for the government." He confirmed that several MPs had not attended the meeting because of “other engagements", but declined to comment on the number of those that had stayed away. He added that contrary to news reports that said the SP was running the risk of antagonizing its Muslim voter base by supporting the deal, “majority of Muslims are satisfied and pleased that the government has been saved".

Ambeth Rajan, a representative of the Bahujan Samaj Party (BSP) in the Lok Sabha and the party’s treasurer, claimed that around “10 SP MPs" were in talks with his party. “You cannot say that all those who attended (the meeting) are going to vote with the SP or all those who did not attend are going to join the BSP," he said. BSP, with 17 representatives in the Lok Sabha, withdrew support to the UPA last month. The electoral base of both the BSP and the SP is largely restricted to Uttar Pradesh.

Meanwhile, JD(S), one of the parties expected to support the UPA, has said it will declare such support, “a day before" the government has to prove its strength in Parliament. And the main opposition party, the Bharatiya Janata Party, has stepped up its attack against the UPA government and is considering moving a no-confidence motion in Parliament that will force a show of strength.

PTI and AP contributed to this story.