Home / Companies / News /  Amazon India doubles its war chest to $4.74 billion to take on Flipkart
Back
Share Via

Amazon India doubles its war chest to $4.74 billion to take on Flipkart

Amazon has nearly doubled its authorized capital to $4.74 billion, nearly matching its India investment commitment of $5 billion made in June 2016

Not only does it improve the prospect of further investment commitments from founder and chief executive Jeff Bezos, it also sets the stage for an all-out, high-stakes war against local e-commerce rival Flipkart.

According to a separate filing on Tuesday, Amazon also infused Rs2,900 crore ($443 million) into its Indian marketplace arm, Amazon Seller Services, making it at least the third such capital infusion this year.

According to regulatory filings with the Registrar of Companies on Tuesday, Amazon India has already issued paid up capital of Rs17,839 crore ($2.7 billion) towards Amazon Seller Services—far exceeding its initial commitment of $2 billion in July 2014. 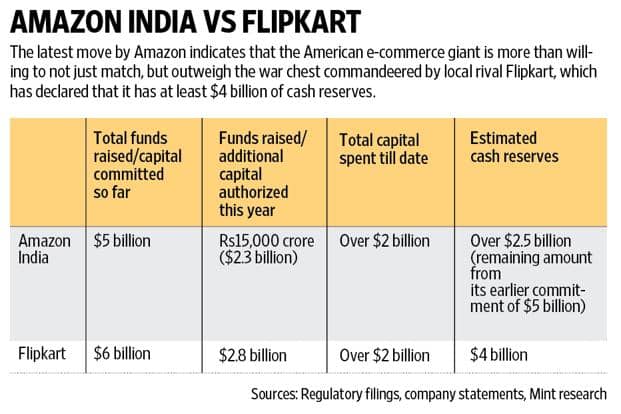 The latest move by Amazon indicates that the American e-commerce giant is more than willing to not just match, but outweigh the war chest commandeered by Flipkart in the battle for what is widely seen as the world’s last major consumer Internet market.

“As India’s largest and fastest growing e-commerce player, and with a long-term commitment to make e-commerce a habit for Indian customers, we continue to invest in the necessary technology and infrastructure to grow the entire ecosystem. We are delighted and humbled by the trust from our customers, to lead in India on things that matter to our customers in over four years of our business, while continuing to launch innovative India-first initiatives as well as completely new offerings like Echo, Prime and Prime Video," an Amazon India spokeswoman said in response to a query from Mint.

Flipkart, which is also extremely well-funded and counts among its investors Japan’s SoftBank Group Corp., China’s Tencent Holdings Ltd, South Africa’s Naspers Ltd and Accel Partners, has already raised nearly $3 billion in two separate tranches this year and has declared that it has at least $4 billion of cash reserves. Flipkart did not immediately respond an email seeking comment.

Amazon’s willingness to pump in more funds is especially significant at this point, because it comes after a bruising festive season battle against Flipkart where it lost out to the Indian online retailer, as Mint reported on 27 September. The company also lags Flipkart in terms of overall gross sales.

To be sure, Amazon has disputed the claim that it lags Flipkart and has asserted that its methodology of calculating gross sales could be different from that deployed by Flipkart. Gross sales refers to the value of goods sold on a platform, not net revenue.

In recent interviews, Amazon India chief Amit Agarwal has indicated that the online retailer has a multi-year, multi-billion dollar view as far as India is concerned.

“I think our investments are still squarely in the same three areas—how do we add more selection, how do we make it easier for sellers to offer more competitive prices and how do we build for faster deliveries... A layer on top of that is that we keep investing in Prime—so video, music, Echo, etc., are our key areas," Agarwal said in an interview on 27 October.

The pace at which Amazon has raised the stakes in India to fight Flipkart has been staggering. In July 2014, Amazon’s authorized capital was only Rs1,500 crore, when Bezos made the initial $2 billion commitment. In June 2016, Amazon committed a further $3 billion. Amazon has nearly caught up with Flipkart in its four years of operations in India.

“As of now, the battle between Flipkart and Amazon is too close to call. I don’t think is Flipkart is going to lose out in the near future, unless they make big strategic blunders, which is highly unlikely," said Harminder Sahni, founder and managing director of consulting firm Wazir Advisors. “Having said that, Amazon should be happy with what they’ve achieved so far. They have already realized that India is not a winner-takes-all market and that there’s enough room for two big players to compete."