Mumbai: New Delhi: In a move towards possible reconciliation, the two Reliance conglomerates controlled by warring brothers Mukesh Ambani and Anil Ambani said on Sunday that they had scrapped all existing “non-compete" agreements, allowing either group to enter sectors that had earlier been reserved for one of them.

The boards of Mukesh Ambani-controlled Reliance Industries Ltd (RIL) and Reliance-Anil Dhirubhai Ambani (R-Adag) group firms approved and signed an agreement cancelling the non-compete arrangement they had entered in January 2006, they said.

The two sides signed a simpler non-compete agreement that will restrain RIL from setting up gas-based power projects until 2022. This sector will remain the preserve of R-Adag. 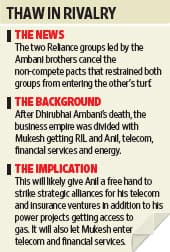 RIL and R-Adag are “hopeful and confident that all these steps will create an overall environment of harmony, co-operation and collaboration between the two groups, thereby further enhancing overall shareholder value for shareholders of both groups," the statements said.

The statements followed India’s Supreme Court ruling two weeks ago in favour of RIL in a bitter dispute over gas pricing with Anil Ambani’s Reliance Natural Resources Ltd (RNRL). The apex court ruled that RIL can sell gas to RNRL at government-set prices that are higher than those agreed to in a 2005 family accord. It asked the parties to renegotiate their contract within six weeks after talks begin.

The announcement on Sunday afternoon was seen as a clear positive for RIL by analysts who are now waiting to see which new sectors the two brothers choose to enter.

“This is more positive for Reliance Industries than R-Adag, because this gives Reliance an opportunity to look into expansion in other areas," said S.P. Tulsian, an independent investment consultant. “You can’t rule out the possibility of Reliance entering in sectors such as telecom."

By forsaking the non-compete agreement before its scheduled date of 31 December 2015, RIL can enter sectors such as telecommunications, thermal power generation and city gas distribution in New Delhi and Mumbai earlier than it otherwise could have. The estranged bothers had, in June 2005, with the help of mother Kokilaben Ambani, family friend and banker K.V. Kamath and a battery of lawyers hammered out an agreement that divided the Ambani business empire, with energy going to older brother Mukesh and the fledgling businesses of telecommunications, infrastructure, financial services, power and fuel trading handed out to the younger Anil.

Other analysts saw the scrapping of the non-compete agreements as beneficial to both brothers’ business interests. In 2008, the non-compete agreement had scuppered a merger and acquisition deal that may have redefined Anil Ambani’s Reliance Communications Ltd as a global telecom player. The deal envisaged a share swap with South Africa’s MTN Group Ltd, but the right of first refusal option with RIL saw the deal becoming a non-starter.

“The end of non-compete agreement will free up Anil Ambani to consolidate his telecom business both in India and abroad," said the chief executive of an investment bank who didn’t want to be named.

“It is a good development. Whatever allows the management to focus on their businesses is good,’ said a Mumbai-based analyst with a foreign brokerage who did not want to be named, referring to the energy and time both groups spent in the feud over gas pricing and other disputes.

The latest arrangement may include a way for R-Adag to access gas from RIL’s field in the Krishna-Godavari basin for its power projects, some analysts said. Gas is allotted to customers by the government in line with the gas utilization policy that prioritizes users: existing fertilizer units rank first, followed by existing power, petrochemical and city gas projects.

New projects aren’t high up on the priority list. While Reliance Power Ltd has projects with a total capacity of 35,000MW in its portfolio, only projects totalling 941MW have been commissioned so far.

“The contours of the arrangement would have a game plan to acquire access to the required gas for R-Adag. It is equally in interest of RIL to have a secure off-taker for its gas," said Gokul Chaudhri, partner at audit and consulting firm BMR Advisors.

“The groups are moving ahead from the stage of constraining each other to allowing themselves to cooperate and compete in the wider economic interest of the groups. The absence of non-compete (arrangements) will enable both groups to grow and expand, and deliver efficiency and value."