New Delhi: When Samar Ahmed stepped into the elite environs of the Indian Institute of Technology, Delhi, a year ago, one thing stood out. In the admission booklet sent to all students, he noticed the skewed gender ratio in his school.

“There was a marked difference between the number of girls and number of boys," said Ahmed, who hails from Kanpur. In his undergraduate class in mechanical engineering, for instance, there are 84 boys and two girls. 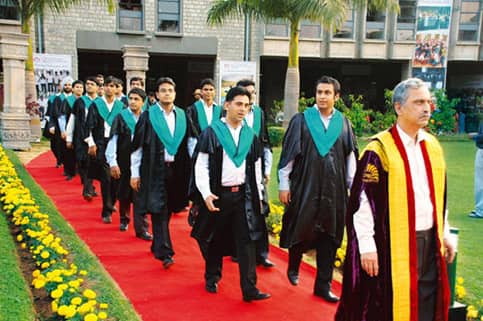 The convocation procession of IIM-B’s class of 2010. While IIMs still do not have data on how many women it to the institutes, a conventional class usually has 10-12% female students.

It’s a worry expressed more often in the Indian Institutes of Management (IIMs), the country’s top-ranked business schools (B-schools), where classes mostly comprise IIT graduates or other engineers and are, therefore, almost as skewed in their gender ratio as Ahmed’s class.

Pankaj Chandra, director of IIM Bangalore (IIM-B), says he’s concerned that not only are women not entering IIM classrooms in sufficient numbers, not enough of them are even applying for the seats. “Why are larger numbers of women not applying? What are the entry barriers?" Chandra wants to know.

His colleague Sourav Mukherji, who was part of the team that interviewed students who won seats this year, said diversity in the classroom was a matter of serious concern. “Management is so discussion-oriented. Unless you have multiple points of view", the class experience is not enriching, said Mukherji.

Consider this. In the last common admission test (CAT), the qualifying exam for getting a seat in the IIMs, women made up just 26% of the candidates who applied to take it. Women numbered 57,048 out of a total of 217,588 candidates. While IIMs still do not have data on how many women have made it, a conventional IIM class usually has 10-12% female students.

IIM Kozhikode (IIM-K) this year breached a barrier of sorts by admitting 30% women in its new class, up from 12% last year; the school went to the extent of releasing these numbers to the media, so significant did it consider the jump.

“We want more female students as they generally turn out as good managers," said the B-school’s director Debashis Chatterjee.

IIM-K increased the weightage given to the past academic performance of candidates. Those who came for the interview were asked to write an essay to test their language and social skills.

“There was clear instruction to the admission committee to look for several qualities like social skills, leadership acumen and language skill, among others," Chatterjee said. “We are quite happy to do things differently as a budding manger needs to have more efficiency than just solving a question paper."

The main reason cited for the fewer number of women interested in CAT is that it is quant-heavy. That is, it favours candidates with better math skills. Translated, it favours engineers.

The stage at which women get left behind is not CAT, but IIT-JEE (joint entrance examination), which is the qualifying test for winning undergraduate seats in the technology schools.

This data is of key importance for B-schools such as IIMs, where gender diversity is an aspiration.

Data collected by CoolAvenues.com, a Master of Business Administration community portal, shows that in the graduating class of 2010 at IIM Ahmedabad (IIM-A), 94% were engineers.

At other IIMs located in Bangalore, Indore and Kozhikode, engineers made up 86-88% of graduates in 2010.

Mukherji of IIM-B said the IIMs are aware that in their class “85-90% of students are engineers" and that the class is composed of “predominantly male engineers".

Some experts feel that women face a big hurdle in the multiple-choice nature of competitive exams.

Indeed, the experience of a highly-ranked engineering school seems to bear out this theory. The Birla Institute of Technology and Science (BITS), Pilani, introduced a competitive exam in 2005-06. Prior to that, the school admitted students on the basis of their class XII scores. In 2004-05, just before the introduction of the exam, women formed 41% of the class. After the exam was introduced, women dropped to 15% of the class. A school that was inching towards gender parity now has women forming a much lower part of the student population.

BITS Pilani feels the competitive exam itself may have also led to fewer women winning seats.

But many disagree, since women do well in exams for entry into law and medicine. In the common law admission test for 2009, a test for winning undergraduate seats in 11 national law schools, 1,073 candidates were successful. Of these, 514 were women. That is, women interested in becoming lawyers won nearly half the seats.

Test-preparation companies that have worked with women candidates blame social conditioning more than math for the disinclination to get into an engineering programme. “In the Indian perspective, the social role is much more important than a cognitive approach," said Raja Mitra, chief operating officer of Aakash Educational Services Ltd, a test-prep company that specializes in coaching for medical entrance exams. “Being a (female) doctor is more respected. In a family, will you feel the same level of pride for an IT engineer?"

Mitra said families also worry about their daughters having to do “field jobs" and being “on-site" in case they become engineers.

There is empirical evidence to back this. A study by BITS Pilani on gender-related issues in admission to engineering and B-schools, prompted by the low number of women in the school, showed that almost 70% of respondents were influenced by their parents in choosing a particular stream in professional educational institutes.

The few women who make it past the entry barriers say the battle is a mental one. “I don’t get the logic—why wouldn’t women want to take that (the CAT exam)? It’s not that difficult," said Urvashi Gupta, 21, an undergraduate enrolled in Delhi University’s commerce programme, who will join IIM-A.