Treadmill: You’ve got the power

The health benefits of a regular running regimen are well documented. From keeping blood sugar, blood pressure (BP) and cholesterol levels under check, it also helps cure various ailments such as sinusitis and arthritis, and ensures a general overall fitness. But, the most important impact running is to help build self-confidence, mental toughness and, ultimately, self-esteem. 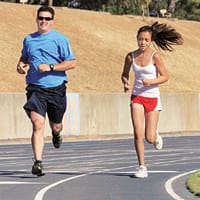 Indeed, running can show us the way. Ask me. When I started, I could barely run a kilometre without stopping, and it took me six months of regular practice to be able to run 5km non-stop. The exhilaration of achieving a personal goal, I found, was much higher than touching the several stretch goals that we set for ourselves in our professional life. It wasn’t easy. But those six months taught me a lot about myself. I also realized what it takes to build mental toughness and be focused on one’s personal goal. It was a gradual process. As soon as I touched the 2km mark non-stop, I felt great. It motivated me to raise the bar further, and before I knew it, I was able to do 5km.

Soon I felt I could do anything, and that’s when I announced to my colleagues that I was going to run a marathon.

Of course, I was no athlete, but it was my mind speaking, and soon I found myself at the finish line of the first of the 19 marathons I have run to date. I realized I had become mentally tougher, built up self-confidence, and could feel a surge in my self-esteem.

I have many friends who have greatly benefited from a regular running regimen and a more balanced intake of food: some of them have lost 20-33kg, eliminated pain in the shins and knees, and some, at 70, look 10 years younger. A number of people have written to me on my website about how they lost 3kg in a month and have even started controlling their blood pressure.

Two months ago, a colleague told me that she had increased her running in the gym from six minutes to 20. Another says that she is able to run 11km non-stop in just three months since she started to run. She has even signed up for a half-marathon.

All these success stories tell us that something as simple as running can help in developing our self-esteem. As the weather in New Delhi in particular, and in Mumbai to an extent, cools over the next two months, and the humidity levels drop, do yourself a favour you will never regret:?take out a paper and write down a stretch running goal for yourself—it may be to run 500m without stopping or it could be to run 7km in a particular time. Measure your waist size, weight, blood pressure and cholesterol levels. Follow a schedule and be disciplined about it. There are some links to great training programmes for walkers, joggers and runners at www.runningandliving.com/community.

After seven weeks, take stock of waistline, weight, cholesterol and BP. The results will amaze you. You will feel fitter, younger, refreshed and energized.

So, don’t wait for the start of a new week, or for your boss to change or for that great day when you think you will automatically start running in your sleep. Just set your alarm for waking half an hour earlier than usual, and get going.

You will never be the same again. There will be a spring in your stride, and you will know that nothing is impossible because you have seen yourself make that journey. Keep at it, and maybe enrol for a 7km run to keep yourself focused and get up and train on some days, even when you are not in a mood for it.